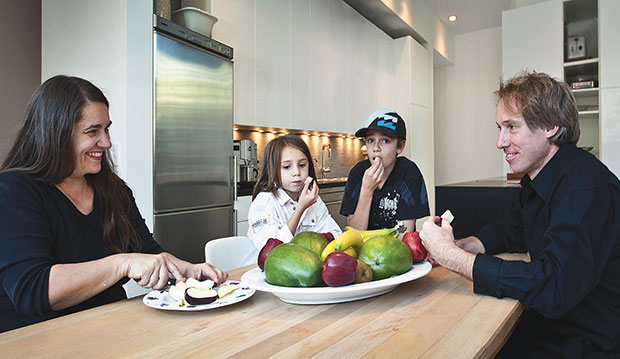 A House for the Future

One U professor of architecture’s mountain home is an experiment in sustainability.

The U’s scientific glassblower melds science and artistry into his work. Photos by Stephen Speckman Kevin Teaford learned what it could really mean to be a glassblower during an otherwise ordinary week in the early 1990s. At the time, Teaford was working for a glassworks in northern California that made a wide range of custom […]

An artist and activist uses murals to stimulate community engagement. Five-hundred years ago, two noted artists were commissioned in a contest to decorate the walls of the Council Hall in Florence’s famed Palazzo Vecchio. The competition would mark the rebirth of the Florentine Republic, celebrating its freedom and redefining its community. The Tuscan artists Michelangelo […]

Cardiologist Nassir Marrouche knows matters of the heart. He stands a head above his colleagues in the dim light of the electrophysiology lab, his eyes focused on the task ahead. His soft voice conducts an orchestra of assistants tuning instruments playing in harmony to heal a heart. Bordering the lab, a row of monitors lights […]

From spirituality to scholarship, Professor Kathryn Stockton asks difficult questions—and sometimes finds unexpected answers. No one would confuse the road to Salt Lake City with the one to Damascus. But for Kathryn Bond Stockton, the journey that brought her from a nearly ordained Episcopal priest to professor of English, celebrated queer theorist, and director of […]

Mike Dunn’s commitment to telling meaningful stories with film makes him a great fit as the new head of KUED. Michael A. Dunn BS’81 MA’06 loves challenges. And in August 1994, he faced one never before taken on by a human being in Grand Teton National Park. Dunn was on an early morning run when […]

‘When you can give to folks’

Professor Bill Farley reflects on the influences that have fueled his 50-plus years in social work. How does a man whose career spans half a century sum up his tenure? “It was one of the most gratifying and rewarding experiences of my life,” he says. O. William “Bill” Farley BS’58 MSW’59 PhD’68 began his career […]

You Need a Person

Anthropologist Polly Wiessner turns her efforts toward benefiting the people she studies. The Enga tribes of Papua New Guinea have a saying, “Endakali Yangingi”—You need a person—meaning that everybody is of value and has something to give to accomplish a task, no matter how daunting or trivial. Polly Wiessner has been one such person for […]

Putting a New Spin on Electricity

Rosenblatt Prize-winning physicist Valy Vardeny is working to revolutionize how we get power.