A number of couples have found their callings on campus. 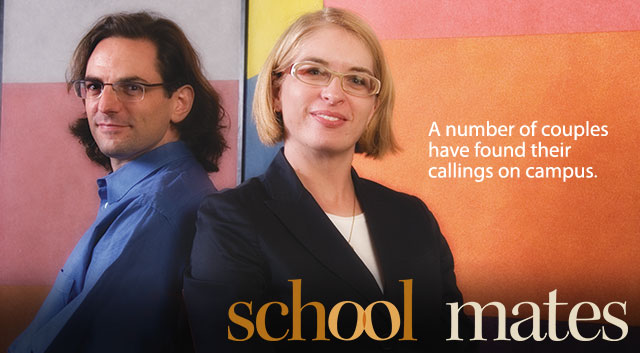 There’s no doubt that the University of Utah attracts some of the best and brightest faculty and staff in the country. After all, it’s an engaging, stimulating place to work. And the U engages its fair share of couples—husband and wife teams who have found their calling on campus, sometimes in wildly different areas (and sometimes not). Following is just a sampling of the many dynamic duos at the U.

The Art of Marriage

Picture this: Two college grads land jobs at the Philadelphia Museum of Art, where they meet and fall in love. Over the next 19 years, the landscape of their lives changes from Philadelphia’s red brick façades to Princeton’s green lawns, from Boston’s gray skies to Berlin’s white stone monuments, and from Hartford’s autumn scarlets (where they married 10 years ago) to Utah’s summer sage (where they arrived when their first son was six weeks old). Hardly a still life.

But that suits Monty Paret, assistant professor of art history in the Department of Art & Art History, and Gretchen Dietrich, interim director of the Utah Museum of Fine Arts, just fine. Art and its role in our world define every aspect of their lives, including the careers they’ve built, their conversations around the dinner table with their two young sons, and the vacations that never seem to be completely separated from their vocations.

“You know Click and Clack, the Car Talk guys?” Gretchen asks, laughing. “They always make fun of people who study art history. But we’ve been fortunate and worked in amazing places and been able to do really interesting things in the arts.” With Gretchen’s career in museums and Monty’s in academia, the two bring different perspectives home each night. But as Monty explains, “There’s a shared commitment to the visual arts and the kind of value they bring” that they credit with strengthening their relationship, despite the constant pressure to balance their work and family lives.

The Poet and the Scientist 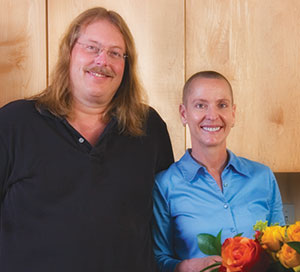 Chris and Katharine are of like mind in spite of seemingly divergent careers.

Katharine Coles PhD’90 was a U of U graduate student in English when Chris Johnson MS’84 PhD’90 walked into the bookstore where she worked. Chris says, “When Kate asked me what I did, I told her I was a graduate student in physics.” To his surprise, instead of backing away, “Kate actually said, ‘What kind?’ I think that struck up our conversation.”

“It continued,” Kate adds, “because we did not believe the stereotypes applied to literary people on the one hand or to scientific people on the other. We both understand that poets have to be very disciplined to get their work done, and that to be a good scientist you have to be extremely creative. The implications are that a poet and a geek couldn’t possibly have that much in common, but we share a lot more than what we don’t share.”

Today, Kate is a professor of English, director of the Utah Symposium in Science and Literature, director of the Harriet Monroe Poetry Institute at the Poetry Foundation in Chicago, and Utah’s Poet Laureate. Chris is the director of the Scientific Computing and Imaging Institute and a Distinguished Professor of Computer Science. To combat the stresses of two high-profile careers, they walk their dogs, hike, bike, cross-country ski, and garden. Kate adds, “And we eat breakfast and dinner together.”

They laugh as they realize that their advice after 20 years of marriage distills to this: “Eat right, get plenty of exercise, and talk to each other every day.” But they admit none of those are easy. “The ‘talk to each other’ is the most important part,” says Chris. “It’s also the thing that falls through the cracks if you’re not really paying attention,” adds the poet. “And there’s something about having support from a like-minded person at home that enables you to take the risks you need to take, to engage opportunities with passion, and just to be courageous in daily life… But you can’t take that for granted.”

From Housing to Home 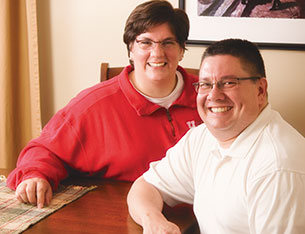 In April 1994, Idahoan and recent U of U graduate Mateo Remsburg BA’94 attended an “interview weekend,” hoping for a housing job at Kansas State University, where he was starting graduate school in the fall. He noticed a grad student from Wisconsin vying for the same job.

Fortunately, they were both hired. By Thanksgiving, the foundations of friendship were taking shape. A year and a half later, they married. But that meant one of them had to change careers. “When you work in housing, you have to live in housing,” says Barb Remsburg. They each managed residence halls, which was fine while they dated. But, Mateo explains, “When we graduated and got married, we actually wanted to live together!” So Mateo switched from housing to admissions and recruitment.

In 2002, Mateo was hired in the U of U’s Student Recruitment office, and the couple moved to Utah. Within weeks, Barb secured a position at the U’s housing office. Once again, the Remsburgs found themselves living on campus. In fact, they’ve spent all but two of their 13 married years in campus housing. So when Barb was promoted to director of Housing & Residential Education, they wanted to live off campus. “We commenced the house search the next day,” she says.

Now their two sons play in a big backyard, Barb has planted a garden, and both she and Mateo spend time in the kitchen cooking. Even the drive to campus turns into family time, as they all carpool together to daycare and work.

Another benefit of being employed at the same place, Barb says, is that “because we’re both in Student Affairs, we can relate and connect about the struggles that are taking place at work.” Despite typical dual-career pressures, she says, “It works for us.”

Mateo, now director of Student Recruitment and High School Services, agrees. “I love what I do, and Barb’s the same way. When you enjoy what you do at work, you bring that home with you.” 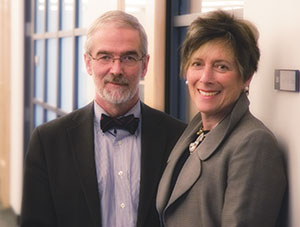 Stefan and Julie share a passion for their work, music, and family.

Julie Korenberg, a geneticist and Harvard pediatric senior resident at Boston Children’s Hospital, was known for leading caroling groups through the hospital at Christmastime. The fact that she’s Jewish wasn’t a deterrent—her classical music training and joy at bringing music to patients easily bridged that religious gap.

Naturally, then, the day she heard classical music emanating from the hospital’s residents’ lounge, she sought out its source, which turned out to be Stefan Pulst, a German completing his residency at Harvard Medical School.

Soon, the two scientists were literally playing music together, eventually performing Beethoven’s Seventh Sonata in concert—Julie on piano, Stefan on violin. Last spring, they celebrated their 25th year of marriage. The occasion was filled with music, family, art, and intellectual enjoyment, and highlighted the couple’s incandescent careers in science. Stefan’s research trajectory in neurology and neurogenetics brought him to Utah in 2007 as professor and chair of the Department of Neurology (and a member of the Brain Institute), where researchers in his lab decipher inherited diseases of the nervous system. Julie’s vibrant research in genetics and genomics and expansion into neurobiology brought her to the U as a professor of pediatrics and a USTAR professor of circuits of the brain at the Brain Institute, where her group is pioneering research in the genetic and neural roots of behavior and disease.

“We have really enjoyed Utah,” says Julie. “Our life since coming here is filled with new activities, [and we’re] enjoying theater, music, the symphony, and the wonderful collaborative scientific and personal friendships that enrich our lives here.”

Though their areas of specialty are very different, the bridge between each other’s interests is obvious. “Research is so complex; you circulate in very different orbs,” says Stefan, “but subliminally there’s a gravitational pull.”

It’s not just passion for their work and music, or their two grown children, that connects them, but also their “vision of why we’re here on earth,” says Julie. Her mother was born in Eastern Europe. Stefan’s mother was the daughter of an industrialist in northern Germany. “I’m a product of a first generation Jewish American community. He’s a product of post-war Germany,” Julie explains. “I came to think of us as the healing generation. We’re not the generation to be torn apart. That’s what we have to teach our children.”

—Kelley J.P. Lindberg is a freelance writer who has written many articles for Continuum.