Ask Angela Wright what kind of bike she rides and she answers, “Oh boy, who has just one bike?” Her current “quiver” includes a Tern GSD electric cargo bike, Specialized S-Works Diverge gravel bike, a Specialized Epic Pro, and a Specialized S-Works Stumpjumper. “I may have a few community cruiser bikes in my fleet as well,” she adds.

A Utah native, Wright MBA’14 has been riding bikes for more than 25 years and says cycling has impacted every aspect of her life. As majority owner of Bingham Cyclery, with locations in Salt Lake City, Sandy, Sunset, and Ogden, she has gained a strong community of friends and had some incredible biking experiences. With her 5-year-old daughter in tow, she loves exploring Salt Lake on her cargo bike. “We make an adventure out of each ride,” she says. She also enjoys biking the Wasatch Crest Trail, Corner Canyon in Draper, and other trails in Park City, Moab, and St. George. “Honestly, we truly live in the best place to ride,” she adds.

Raised in Pleasant Grove, Wright remembers riding her Big Wheel with her brother and sister in the family garage. “Once we graduated from that, the rest is history. We rode our bikes everywhere!” One of her childhood favorites was the Canal Road, which is now a paved multi-use path called the Murdoch Canal Trail that runs along the base of Mount Timpanogos. “Bikes have shaped my life since then. I love the freedom and joy I feel when I’m pedaling,” she says.

Wright’s first job, at age 16, was at the Broken Spoke bike shop in Orem. After graduating from high school, she attended Utah Valley University, then Utah State University, where she earned an undergraduate degree in geography and spent her senior year in a national student exchange program in New Hampshire. She lived in the area for about eight years before moving back to Utah, where she had the opportunity to buy Bingham Cyclery.

“Because of my lifetime passion for riding, I realized that owning a chain of stores would allow me to utilize all my skills and life experiences to create the dream profession for myself,” she says. But there were challenges. She had to find investors who were willing to take a risk on her. “I worked with my lawyer to build the investment framework and then talked with maybe four dozen people about it—all of which had to be done before the purchase could be made. Needless to say, there were many moving parts to make it all come together.”

She also realized that getting an MBA would provide her with extra skills to ensure her success, so she applied and was accepted to the U’s program. The experience gave her the tools and resources she relies on every day to run her business. “But the most unexpected outcome of the MBA program was the increase in my self-confidence, which I use to my advantage as often as possible,” she says.

Busy as she is, Wright finds time to serve on the boards of several bike-related nonprofits and has created a formal giving program to provide bikes for kids, as well as women-specific clinics to bolster confidence, form friendships, and build community.

“I love where I live,” says Wright. “Access to the mountains and desert and hundreds of miles of single track, dirt roads, paved roads, and wilderness—it’s genuinely hard to beat.”

The latest from fellow grads and the Alumni Association.

One alum has been bringing silent films to life for more than 30 years.

Recognizing the achievements and lives of distinguished and honorary alumni. 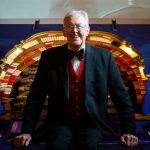 Striking A Chord
One alum has been bringing silent films to life for more than 30 years.