The silent films shown at The Organ Loft—an event space tucked into an unassuming side street in South Salt Lake—transport moviegoers back to the ’20s and ’30s. But it’s not just Charlie Chaplin or Laurel and Hardy who take center stage. It’s the live accompaniment on a theater organ that makes this experience so unique.

Blaine Gale BS’58 MS’79 has been playing the Loft’s namesake instrument—with its five keyboards and more than 2,400 pipes, bells, and whistles (not to mention drums, clackers, and buzzers)—for more than three decades. He studied commercial art and advertising at the U and founded his own company for his day job—Gale Videofact Productions. But playing organ on the weekends and in the evenings for movies and events is his passion.

When Gale sits down at the organ at the start of a film, he’s got the basic themes of the movie ready (after watching it on YouTube eight or nine times the week before), and he never misses a cue when there’s an important part to synchronize—like the slamming of a door, or a car horn honking. But for most of the movie, he’s responding to the crowd. He doesn’t even use sheet music. “It’s a conversation between me and the audience,” Gale says.

Getting lost in the music and the film and forgetting there’s even an organ in the room is the beauty of silent movies, says Larry Bray, owner of The Organ Loft (also known as Edison Street Events). “And no one does that better than Blaine,” Bray says. “No one.”

Organ enthusiast Caye Reams, who’s been going to the Loft for 35 years, says Gale is a master at bringing you into the movie with music, and no two performances are ever the same. “The pipes and all these wonderful sounds fill the room and are all around you,” she says.

Back in 1946, Bray’s uncle fell in love with theater organs and installed one in an old chicken coop, which became known as The Organ Loft. The space now also hosts private events and monthly dinner-dances, all with live accompaniment. The Wurlitzer there now was purchased from the Paramount Theatre in Staten Island in 1956. Despite never showing the latest blockbuster, or even a movie made in the last 80 years, attendance at the films is stronger than ever, attracting people of all ages, and some showings even sell out, Bray says.

Gale’s been playing music since he was a 7-year-old boy in Payson, Utah. But now he’s 85 and wants to pass the torch to the next generation of organists. Preserving and showing these films connects people to music, art, and history. And for musicians, there’s a lot to be learned from playing the theater organ, he says.

The latest from fellow grads and the Alumni Association.

This U alum makes bikes her business.

Recognizing the achievements and lives of distinguished and honorary alumni. 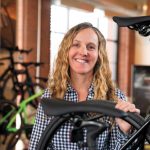 Passion for Pedaling
This U alum makes bikes her business.
next article 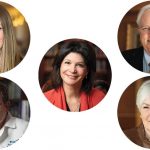