Rosenblatt Prize-winning physicist Valy Vardeny is working to revolutionize how we get power. 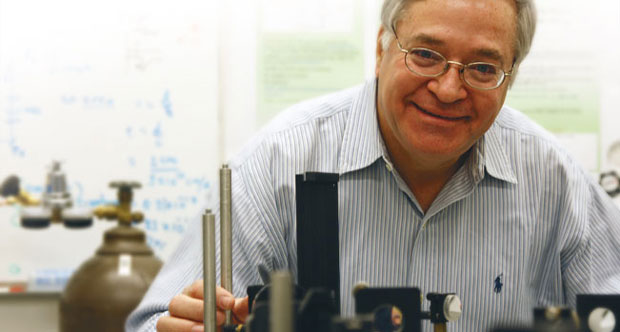 At first, it seemed simple: Z. Valentine “Valy” Vardeny would become a nuclear physicist and help Israel develop The Bomb. For young men in post-World War II Israel, nuclear physics was the way to go—help build a nuke, and defend your country.

But then came October 4, 1957, and everything changed for Vardeny. On that day, the Soviet Union hurled Sputnik 1 into an elliptical, low-earth orbit. The world reeled with the news that the Soviets had achieved a technological miracle—the deployment of the first artificial satellite. And on that day, Vardeny changed his mind about studying nuclear physics. “I realized that solid state physics was more interesting— because of electronics,” he says. “This was the Sputnik Age. Everybody wanted transistors, resistors, and other electronic components.”

Nukes still mattered (and Israel’s nuclear prowess would become the worst-kept secret in the Middle East), but as the 1950s drew to a close, transistor radios were all the rage, with kids around the world plastering the little boxes to their ears to catch distant baseball games. The technological push was to go smaller, faster, cheaper. And for Vardeny, it was a revelation. “I realized that science has to come with applications, because otherwise we’d lose to the communists,” he says with a laugh.

So with the thunderous launch of Sputnik, Vardeny’s career was also launched, taking a trajectory that led him to become one of the world’s most renowned experimental physicists, working with organic materials to develop revolutionary electronic devices that are faster, less expensive, and more efficient. His work would eventually bring him to the University of Utah, where he would win the Rosenblatt Prize, the U’s most prestigious honor, in 2009.

Vardeny has captured the scientific community’s attention through his research into “organic spintronics.”

Vardeny reflects on his educational and vocational path and its roots in the Romanian Communist Party’s rise to power in the late 1940s. “My father had a small textile factory in Romania,” he says. “And when the communists came to power, they kicked my father out of the factory, took his factory, and he became a seller of ties. So he told me this: ‘You think you own something—and then overnight you are nothing, just capitalistic garbage.’ So he put into me the idea that knowledge is more important than anything else. It doesn’t matter if you have a factory, or money, or stock—these can be taken, but knowledge cannot.”

Aside from a love for knowledge, he picked up another passion from his father as well: the complex card game of bridge. Vardeny’s father was a minor celebrity in the bridge world in Israel. “He was very, very good. And so from a young age, I knew how to play bridge.” The game appeals to his innate intellectual curiosity. “I love cards—it’s all about probabilities, working out things in your head, like, What is the probability that this card will be in this hand?”

Once Vardeny’s father had been branded a “capitalist” in communist Romania, it became impossible for him to find a secure job to support his family. So they packed up and moved to Israel when Valy was 4 years old. They lived in a notorious section of Tel Aviv/Jaffa, where the young Vardeny mistook the junkies on the street corner for doctors, because of their expert use of hypodermic needles.

Following high school, Vardeny entered the Technion—the Israel Institute of Technology—and during the summers served in the Israel Defense Forces (military service in Israel is compulsory for most males). He became a tank commander, and his military career took him across the Middle East in some of the most violent clashes of the era, including the Six Day War in 1967. He received his bachelor’s degree in physics in 1969, but shortly thereafter, found himself commanding a tank against the Egyptians in the War of Attrition.

After a particularly bloody skirmish along the Suez Canal, Vardeny’s tank was hit and was sent back to be repaired. During the trip north, he met his future wife, medical clerk Nira Meir; they married in 1971. The couple now has three children, all of whom attended the U: a daughter who is an assistant professor in pharmacy at the University of Wisconsin, Madison; a son who is a mechanical engineer and manager at Utah’s ATK Thiokol; and another son who graduated in Japanese and business and is now teaching English in South Korea.

After Vardeny was released from the Army, he returned to the Technion, where he received his doctorate in 1979. Soon after, he attended Brown University for post-graduate work, and there his research took a new direction. In a seminar at Brown, Nobel Prize-winning physicist Alan Heeger introduced Vardeny to “organic semiconductors”— which may serve in electronic devices made of organic materials, rather than conventional materials like silicon. Organic semiconductors are cheaper and easier to make, have electronic properties that can be readily adjusted, and may be molded into different shapes.

Vardeny was convinced that this was the wave of the future. “So I went back to my alma mater, the Technion, and began working with organic semiconductor polymers,” he says. When he was considering coming to the U of U in 1987, Vardeny discovered that there was no program here in organic semiconductors. So he started one. He became one of the field’s founding fathers and has since expanded his research to include organic LEDS, lasers, and solar cells.

Within the last five years, Vardeny has captured the scientific community’s attention through his research into “organic spintronics,” devices that increase the efficiency of electrical current by taking advantage of the electron’s “spin”—sort of like increasing electrical flow by controlling the electrons’ polarity in an “up” or “down” position. Imagine that each electron contains a compass needle, which points either up or down to represent the electron’s spin. Capitalizing on the “spin” provides a new way to store data and could lead to vastly more efficient and powerful computers, for example. “All electronic devices up to now took advantage of the charge of the electron, but not the spin,” says Vardeny. “With spintronics, you can double the amount of information by taking advantage of other properties of the electron.”

Vardeny’s groundbreaking work led to his receiving the 2009 Rosenblatt Prize. But it wasn’t just his research that helped him snag the $40,000 award. He is also noted for his ability to inspire and instruct, and is sought by students from around the world for his expertise. “For undergraduates, I teach ‘kindergarten physics’—an introductory course to more difficult courses,” he says. “After one semester, they know something they didn’t know before. You can see it in their eyes—they are more mature. For graduate students, they don’t know what they want in the beginning, or if they want to be graduate students. The best you can do is put the fire of curiosity in their bodies.”

Vardeny keeps his own curiosity well-stoked and credits the U of U for granting him free rein to explore ideas that might not fly at other institutions. “The U is very good at supporting science and research,” he says. “I’m proud that my work has helped to put the University on the map, that something came from us—not based on technology or ideas that we borrowed. If you do good work, it doesn’t matter where you are.”

To read more about Vardeny’s wartime experiences in Israel and his thoughts on Israeli policies toward the Palestinians, read the Winter 2002 Continuum article “The Physics of War.”