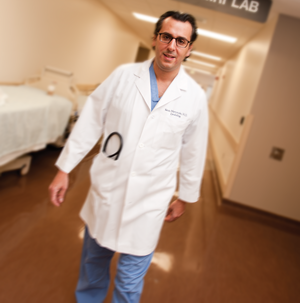 He stands a head above his colleagues in the dim light of the electrophysiology lab, his eyes focused on the task ahead. His soft voice conducts an orchestra of assistants tuning instruments playing in harmony to heal a heart.

Bordering the lab, a row of monitors lights the faces of lab technicians observing the procedure. On one screen, a 2-D black-and-white image frames a catheter snaking its way to the left atrium of a heart. On another screen, a 3-D color image of the heart spins suspended. And on yet another, a patient is shown wrapped in the cocoon of the MRI machine.

Nassir Marrouche, M.D., is doing what he does best—fixing broken hearts.

Marrouche has devoted his professional life to finding a cure for atrial fibrillation (AF), a heart rhythm disorder that affects more than five million Americans and is a contributing cause to more than 66,000 deaths a year.

Born in Kuwait, Marrouche knew early in life that he wanted to be a doctor. “At 10 years old I was researching and thinking like a med student,” he says. “I chose to focus on electrophysiology and cardiology because I wanted results—I wanted immediate results for treatments, and to be involved in the excitement of research and creating better treatment options.”

Marrouche chose to study medicine at the University of Heidelberg in Germany because of its vaunted tradition of intellectual investigation and innovation. “And for the German soccer team,” he adds with a grin. “It’s the best in the world!”

In 1999, Marrouche came to the U.S. to start his electrophysiology fellowship. At that time, treatment for AF was based on electrocardiogram (EKG) readings to identify the disease, and ablation (the burning away of tissue) or medications to address it.

“We thought we could cure everyone through ablation,” he says, “but that’s not so. It’s not black and white; there’s always a grey zone. Something was missing.”

Then in 2004, Marrouche came to the University of Utah to give a lecture. While here, he visited the Utah Center for Advanced Imaging Research (UCAIR) and the Scientific Computing and Imaging Institute (SCI). “I knew Utah was it,” he says. “Everyone has MRI and computers, but nobody else has what Utah has.”

What exactly Utah has is the resources in imaging, specifically Magnetic Resonance Imaging (MRI), to diagnose, treat, and personalize the management of AF.

“AF is the cancer of heart disease,” Marrouche explains. “With cancer, before treating it, you stage it—how much has it spread? Has it metastasized? What is the best approach for treatment based on the stage it has reached? Scanning and staging are used to develop a treatment plan. But with AF, treatment was traditionally based on EKG readings, which can’t tell us the severity of the disease or where it lies within the heart.”

In 2009, Marrouche founded the University of Utah’s Comprehensive Arrhythmia Research & Management Center (CARMA), leading a team of researchers conducting the world’s most innovative research on the use of MRIs to treat AF.

“MRIs look at the disease on a cellular level, making a 3-D image that shows the disease in green,” he explains. This technique, called a delayed-enhancement MRI, involves a patient’s receiving a pre-ablation MRI, during which his or her heart is injected with gadolinium, a silvery-white metal. The gadolinium settles in the damaged tissue, allowing the MRI equipment to create a map of the exact location of the diseased tissue. Through this process, physicians are able to quantify the percentage of damage in the heart. The software to display the damage, developed by the SCI Institute, enables Marrouche’s research team to develop a method for staging AF—a method that the U.S. Heart Rhythm Society has honored as one of the best clinical research projects in America.

Using these 3-D images, Marrouche created a four-stage patient classification system designed to determine the actual extent of damage to the heart. The four stages, called Utah I, II, III, and IV, help guide the treatment plan for each patient.

“If a patient turns out to be Utah I—meaning that about five percent of the left atrium is fibrous—the damage is ablated and the success rate is nearly 100 percent,” he explains. “But if it turns out the patient is Utah III or IV, ablation is less likely to be successful and will only lead to unnecessary costs for both the patient and the hospital. Everyone needs to be staged before being treated. Choosing the right candidates for the ablation procedure is the key to success.”

While patients classified as Utah I have a 99 percent cure rate by ablation, those who are Utah II have an 80 percent rate. “Those are very good odds,” says Marrouche.

The staging system also provides information on a patient’s risk of having a stroke and whether commonly prescribed medications will be effective. In patients at Utah III or IV, ablation is ruled out and the focus turns to managing the disease with medication, since they are at increased risk for stroke.

He and his team are the first researchers in the U.S. to use MRI to see continuous, real-time 3-D images of a patient’s heart and the exact location of a magnetic resonant-compatible catheter used for burning away damaged heart tissue.

The only way to cure AF, explains Marrouche, is to create scar tissue through burning. “Using the MRI, we can see if we’ve created a lesion deep enough to form scar tissue.”

The procedure takes about three hours, and Marrouche has performed more than 1,000 of them. About 90 percent of his patients are arrhythmia free and off heart medications within three months of their procedures.

Marrouche performs radiofrequency ablations on nine to 10 patients per week, and many have been life-changing events. Jim Daily, 72, had been treating his AF with medication for eight years, but because the drugs were no longer effective, he was struggling to breathe with a heart functioning at less than 12 percent of capacity. After undergoing a catheter-based ablation performed by Marrouche, Daily says, “It’s like I got a second chance at life.”

“I’m a very impatient guy,” says Marrouche. “I like to see quick results—and with heart treatments, you often see patients recover right before your eyes.”

Because of his commitment and drive, Marrouche has gained an international reputation. A number of patients from other countries have traveled thousands of miles to be treated by him. He has also begun a worldwide patient evaluation program at 16 international medical centers now using his delayed-enhancement MRI technique to stage the progression of the disease.

But for all of his international outreach and background, Marrouche is firmly rooted in Utah, where he enjoys spending time with his family and staying fit through tennis and soccer.

“Obviously, I love the natural beauty of Utah, especially the national and state parks and the skiing,” he says. But more than that, Marrouche likes the people here. “I love their openness. They are so informative, talkative, excited about the future, and motivated. Utah seems to be a huge, friendly village where everyone knows everyone; it’s a real community.”

And at the core of that community is a healer who takes his work to heart.