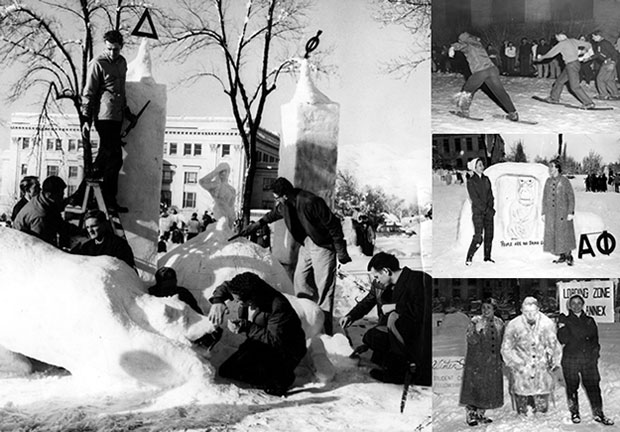 The first mention of a Snow Carnival (also known as Winter Carnival or Winter Festival) at the University of Utah appeared in an issue of The Daily Utah Chronicle in January 1937. This and subsequent carnivals set a pattern of holding various contests on campus, the election of a Snow Queen and attendants, and a ski meet at either Brighton or Alta, culminating in a big dance at which the winners of the various contests and the ski, skate, and snowshoe races were announced. The contests took place on the circle in front of the Park Building, or at Cummings Field, and involved snow sculptures created by fraternities and sororities, ice skating, races on barrel staves, and costumes. The Snow Carnival carried on into the first years of World War II but seems to have been abandoned for a few years after 1942, and it didn’t reappear until 1948. But even during the years in which there wasn’t enough snow on campus for snow play, other activities were improvised, such as mural painting in the dry year of 1951, and the ski races were still held, as was the big dance at the end of the week. Throughout the 1950s, the Snow Carnival was a four-day event, with hundreds of students participating. By the start of the 1960s, however, the Snow Carnival had shrunk to two days and was combined with the Women’s Recreation Association carnival. By the late 1960s, the Snow Carnival had disappeared from the pages of the Utonian yearbook and the Chronicle. Renamed Winterfest, the carnival appeared off and on through the ensuing decades, but it was never the same festive celebration that it had been in the halcyon 1950s. Just this winter, for the first time in many years, the U of U made plans for a new incarnation of the carnival, called Winter Fest, in January 2010, featuring ski tuning and waxing, avalanche safety training, and a vintage ski and snowboard outfit contest.