An artist and activist uses murals to stimulate community engagement. 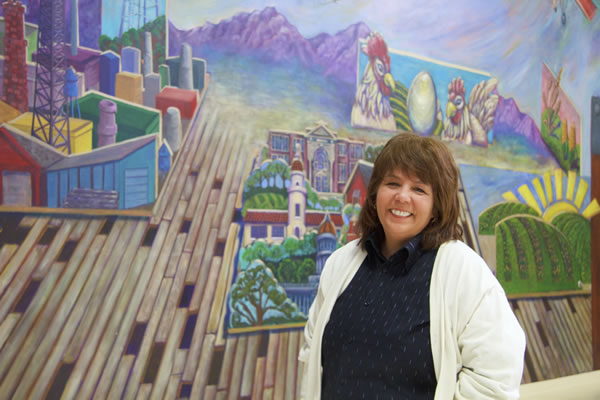 Five-hundred years ago, two noted artists were commissioned in a contest to decorate the walls of the Council Hall in Florence’s famed Palazzo Vecchio. The competition would mark the rebirth of the Florentine Republic, celebrating its freedom and redefining its community.

The Tuscan artists Michelangelo Buonarotti and Leonardo da Vinci were summoned from Rome and Milan, respectively, to illustrate their civic pride and artistic prowess next to one another on the walls of the palazzo’s Salone (grand hall). The contest was the talk of the town, and the battle scenes to be depicted paled in comparison to the heated battle between the artists.

But the contest would have no winner. Da Vinci’s mural was left unfinished, and Michelangelo’s never made it beyond the preparatory stage. However, the event heralded an era of art for community engagement.

Now, a Utah artist has returned to her hometown of South Salt Lake to engage in a similar renaissance—reviving civic pride through community murals.

Kim Martinez BFA’98, associate professor of painting and drawing, has watched the city evolve from farmland to an industrial zone in her lifetime, and feels the growing pains it and its residents have gone through.

“There are over 40,000 people in South Salt Lake between 8 a.m. and 5 p.m.,” she explains. “After 5 p.m., that number drops to only 10,000.” What this means for the community is fewer residents to look after their city, and a greater amount of graffiti to remove from neighborhood walls after sunrise.

In 2003, Martinez began teaching a Special Topics Mural Class that brings students into the community to paint a mural they designed in class. She chose South Salt Lake for the focus of her projects.

Martinez and her students have now completed 17 murals—no simple task when considering the finances, organization, and cooperation required to accomplish such a project. In addition to teaching her students the technical skills required to paint a surface 30 times their size and tie it seamlessly together, Martinez also funds the projects through securing grants, and negotiates the logistics with facility owners. She uses any leftover funding to take her students to visit museums and view art installations firsthand in New York, Chicago, and other metropolitan areas.

Although Martinez has no trouble finding mural sites today—receiving more than 15 invitations per year from business owners along the Wasatch Front to decorate their walls—it wasn’t always the case.

In 2001, Martinez was approached by Tim Williams, then director of Parks & Recreation in South Salt Lake, to paint murals along the city’s TRAX line. She and Williams drove around neighborhoods and approached building owners, asking if they’d like a mural painted.

“When we started out, approaching building owners to ask if we could paint their walls, many owners thought we were offering to paint ads for them. We had to educate them. It took some work to help them understand our goals,” she says.

“The average person sees hundreds of ads per day. Murals are visual images that aren’t trying to sell anything. They are establishing civic pride. We are creating images that instill civic engagement. They are a dialogue with community,” explains Martinez.

Martinez also invites community members to participate in the mural projects as they take place. “If I can get a kid painting a wall with me, and doing it legally, that kid may be inclined to vote when he/she turns 18,” she observes. In 2008, Martinez won a National Endowment for the Arts grant through the Utah Arts Council that allowed her and University students to work collaboratively with participants from “Youth City,” Salt Lake valley teens ages 13-16.

She also notes that the residents and building owners take greater pride in the neighborhood where they’ve contributed murals. The TRAX line has unfortunately been hit by graffiti; however, Martinez says that the murals painted along the line in residential areas have not suffered the way those in vacant lots have. The reason? Martinez’s understanding of the chemistry of paint has given her an edge over graffiti artists whose efforts to deface her murals have often been defeated by her expertise. Martinez uses acrylic paints specially mixed to brave the elements. She and her students paint each mural five to seven times, adding new layers that give them more of a fine art quality than a billboard. “Our murals have been tagged,” she says, “but [the taggers] used house paint, which we were able to remove with an acid wash, and the mural remained unharmed.”

Community Murals
(click above to view a
mural showcase):

“I come from a blue-collar background, and the arts were not considered a reliable professional choice,” she says. “But I always loved to draw.” She brought that passion to a variety of related careers, including ad agencies, product development and design, and the ski industry, where she designed products for multiple manufacturers.

Although she is known today for her large-scale murals, Martinez started out painting much more portable pieces. “I’d been painting and drawing my entire life, but I had to learn to create murals,” she says. “You have to take into account the perspective of an image so large, and how it changes depending on where you stand in relation to it.”

The “New Life” mural located at the Millcreek Trailhead

She notes, however, that she is not a typical commercial gallery artist. “Art can be outside of a gallery or museum, like me. It’s important to me to be engaged in community. If I were an accountant, I would be involved in community accounting. I just so happen to be an artist, so I bring art to the community.” She has taken her art to prisons, hospitals, trailheads, and transportation hubs, to name a few of her chosen locations.

“The work we do will be a bridge,” she says. Martinez is not just teaching her students how to paint, but also to be empathetic to the needs of society. “Murals need to take other people’s experiences and personalize them.”

This is part of the philosophy that guides the selection process for the murals.

Last fall, Martinez’s class completed work on the new Millcreek Trailhead in South Salt Lake. As is the process with every mural project, each student submits a design to be considered for selection by the community. In the case of the Millcreek Trailhead, 150 community members selected the design, “New Life,” by Tyler Smith. The mural, at 870 square feet, is a sequential narrative of birds in space.

Smith says of the work, “A true community has to rely on growth, stability, perseverance, and the fact that ordinary people can go out of their way to make a difference in any way possible. This mural tells a story of ‘new life’ and of a bird born with a single goal, to bring new life to the world. This bird is in search of a supernatural flower that when planted… can grow into a very healthy fruit tree, and not just any fruit tree, but a tree that can bear any and all fruits imaginable. This bird represents the people of South Salt Lake and the idea that anyone can make a difference, the tree is a symbol of growth and stability, and the flower is a symbol of a new beginning. So just remember that with the right mindset, anything is possible.”

Martinez proves that indeed anyone can make a difference, beginning with bricks and mortar, ending with walls transformed into bridges.

2 thoughts on “Turning Walls into Bridges”