Alessandro Galvani, from Milan, Italy, was shocked when he saw a highway sign in Yellowstone National Park reading “Don’t approach the elk.” The cognate for “approach” in Italian is approcciare, which means “to put the moves on” someone. He wrote “I may be Italian, but I’m not stupid!” on a piece of paper, posted it on the sign, took a photo, and sent it to his friends.

Galvani is one of nearly 200 students experiencing the adventure of learning English in the U.S. this year at the University of Utah’s English Language Institute (ELI). The ELI, occupying a long stretch of office and classrooms in the Annex A building, seeks to provide students from around the world a solid base of academic and professional English language skills as well as an understanding of U.S. culture.

One of only about 68 nationally accredited Intensive English programs in the country (of more than 1,000 U.S. programs in all—English as a Second Language is a $12 billion industry), the U of U program offers eight levels of English in classes averaging 14 students in size. The ELI is a freestanding program of the University, meaning that it does not depend on the U for funding but instead contributes to the U at least half a million dollars annually to support other Continuing Ed programs.

Most students spend one year in the program, although those starting from scratch may study for two years, attending five eight-week terms per year. The highest two courses—levels 7 and 8—together constitute a “bridge” that allows students to enter the U’s undergraduate academic programs without having to take the standard English proficiency test.

The ELI is headed by Valentina Inozemtseva, who hails from Irkutsk, one of the largest cities in Siberia, near the oldest lake in the world, the mile-deep Lake Baikal. The author of a book on teaching English, she has lived and taught in Russia, England, China, and the U.S., and has traveled to more than 60countries. Inozemtseva, who holds a doctorate in linguistics from Moscow Pedagogical University and the former USSR Ministry of Higher Education, joined the ELI as a teacher in 1991 and became its director in 1999.

Most students enroll in the ELI because they want to matriculate at a U.S. university, earning a degree in an area such as business, computer science, engineering, or communications. Others are on academic leave from studying at their own universities. Still others are here to improve their English skills for the businesses that employ them back home. A few come simply to learn English and travel. Students often choose the U because Utah is known as a safe, family-oriented environment, and because ELI is a high quality, accredited program offered at a relatively low cost compared to others. Most students, 66 percent, enroll based on a family member’s or the friend’s recommendation of the program, the U, and Utah. 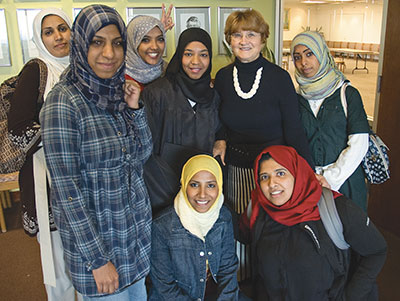 Most ELI students are in their 20s, and nearly all have studied at the university level, with 10 percent having degrees from other universities. Jinho Hyun, from South Korea, has an undergraduate degree in electrical engineering. He hopes to receive a master’s degree in electrical engineering from the U. “English is very important to get a job in Korea,” Hyun says, noting that there it’s considered a marker of potential similar to SAT scores in the U.S. “It proves I can do other things—that I can function at a certain level.”

Fadi Aljohani, a pharmacist from Saudi Arabia, is at the ELI to improve his English with hopes of obtaining a master’s in pharmacy from the U. He says pharmacists have to know English because it’s the language used by the pharmaceutical industry for drug-interaction and side-effects information and the like.

Galvani (who did not “approach” the elk) is a former high school teacher and human rights advocate who plans to return to Italy to work with nongovernmental organizations (NGOs). “I work with charities and foundations,” he says. “Even if English is not the official language, it is the most important.” Also, “much scientific research, including pedagogical research, is in English,” he adds.

In a large classroom, 10 students are sitting around an oblong table contemplating the phrase “What happens in Las Vegas stays in Las Vegas.” While not essential for taking public transportation or using an ATM, the slogan is a good example of expressions with meanings that cannot be derived from the words, says ESL teacher Rick Van de Graff.

Van de Graff, like all of the ELI’s five full-time teachers, has worked overseas and holds a master’s degree as well as a Teaching English as a Second Language certificate. The ELI also has 17 part-time ESL teachers who have master’s degrees or are graduate teaching assistants in linguistics. The instructors, says Inozemtseva, are extremely dedicated. “They give their time to the students before and after classes. I’m really proud of our teachers.”

ELI Associate Director George Plautz BA’77 MA’87 does marketing and recruiting in hopes of diversifying the student population to include students from more countries. But visas, says Inozemtseva, “are very political.” If a country has poor relations with the U.S., or if many of its students do not return home after studies in this country, the American embassies slow down the visa quotas.

In the computer lab, students wearing headphones try to move their tongues as shown on the monitors to better pronounce those tricky English sounds like the short “I” sound in pin vs. the long “E” sound in eat, which, if undifferentiated, can turn words like beach and sheet into disasters

Randall Davis, who lived in Japan for eight years, oversees the computer lab and teacher training. An expert in computer-assisted language learning, Davis maintains an ESL listening Web site (www.esl-lab.com) that is internationally known. (One exercise, for example, asks students to select the correct phrase from among “My bike needs a: 1) beat up, 2) wind up, or 3) tune up.”)

In addition to English, ELI students take such courses as American Culture, America and the World, and American Retrospective. Classes often involve role-playing to accustom students to how Americans interact. In addition, they learn to negotiate new places and situations by taking on challenges using English only: getting a haircut, ordering a pizza by phone, and—more daunting—boarding a bus, closing their eyes, getting off in 20 minutes, and finding their own way back.

All ELI staff are involved in helping students adjust to the U.S. and especially its educational system. Aspects such as mixed-sex classrooms, faculty who dress casually and sit on the edges of desks, classes that start on time, and lively, student-directed classroom discussions can be new to some students.

In Asian cultures, students’ “thoughtful responses and accuracy are more important than a quick response,” says Davis, while in Latino cultures, lively discussion is considered a sign of successful teaching, and students’ mistakes in speaking can be shrugged off. Beyond adjusting to differences in educational systems, students also have to adapt to daily life in the U.S. The things that many say amaze them most are supersized drinks, fast food, and homeless people. Galvani, for one, shivers at the thought of iced drinks in winter, but—good news for purists—gives the Marriott Library’s coffee an Italian’s stamp of approval.

The students agree that Utahns are generally friendly. “People on the street smile and say hello,” says Hyun. “Americans are nice to strangers. When my car broke down, strangers helped me fix it.” But it is sometimes hard to make friends. Aljohani notes that Americans have a greater sense of privacy than he is used to. “In Saudi Arabia, you can just drop in on people; here, you are expected to call first.” He also observes that “people are always busy, working two jobs, and are always by themselves.” Hyun points out that while Americans tend to be very direct and have no qualms about saying no, they will also be polite to you but then report to others that you have been breaking a rule. Inozemtseva says students don’t always understand the American habit of saying “I’ll invite you over” or “Let’s have lunch together sometime” with no follow-through.

The ELI measures its success, according to assessment coordinator Korrin Ebira BA’01 MA’03, by testing the students’ English proficiency at the end of each term and on completion of the program. To move to the next level, students must have 77 percent accuracy in listening, reading, and speaking skills. At the beginning of each University semester, eight to 10 students typically complete the program and enter the U as undergraduate or graduate students.

Students who return to their countries take back far more than just language skills. Galvani will return to Italy with a new attitude toward nonprofit administration and civic involvement. “In Italy, big government takes care of everything,” he says. “But here, people are entrepreneurial in the social fields. They take personal responsibility. If you want to change things, you can. But you have to be involved.” He also has an appreciation of the U.S. Bill of Rights, and specifically its First Amendment protections. He was stunned to witness a protest in downtown Salt Lake where two groups were shouting at each other and the police “just standing watching… That would be impossible in Europe,” he says. “We have a long list of rules that prohibit speech that is intolerant.”

In turn, ELI students leave behind as much as they take home. Consistent with the University’s desire to educate its students to assume leadership roles on a global level, ELI graduates bring a valuable global perspective to the University’s classrooms. (Imagine a class in which U.S. students are able to ask Galvani, Aljohani, and Hyun about freedom of speech in Korea, Saudi Arabia, and the European Union.)

U of U President Michael K. Young, an international law scholar who has worked in the areas of international human rights and religious freedom, says, “The University’s international students enrich the classroom experience in immeasurable ways, enabling our students to obtain the broad, international view of issues that is imperative in today’s world.”

3 thoughts on “Learning the Lingo”