Professor Bill Farley reflects on the influences that have fueled his 50-plus years in social work. 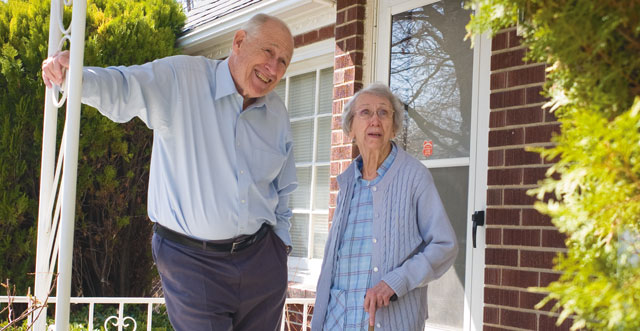 Bill Farley visits with Marjorie Dyke—one of the many recipients of his dedication to assisting the elderly—at her home. Photo by Roger Tuttle.

How does a man whose career spans half a century sum up his tenure?

“It was one of the most gratifying and rewarding experiences of my life,” he says.

O. William “Bill” Farley BS’58 MSW’59 PhD’68 began his career as a professor of social work at the University of Utah in 1962. In his 48 years here, Farley has built an impressive legacy of programs that have provided opportunities for students to develop their social work skills, given assistance to the greater Salt Lake community, and been an inspiration to those around him.

“When I was in fifth grade, my friend’s uncle was studying medicine at the U,” Farley recalls. “They lived near campus, and I always thought, ‘Wow, what an opportunity to be at that university someday!’ ”

Farley worked hard to make that dream a reality. He was the first of his extended family to attend college, and his dedication to studying in high school paid off as he scored high on the national exams and received scholarship offers from Harvard, Yale, and Stanford. He chose to attend Yale, where he focused on industrial administration. He returned to Salt Lake City in the middle of his sophomore year to marry his sweetheart, Mary Siggard ex’57. Not long after returning to Connecticut, the couple decided their hearts were still in Utah, and they moved back. Farley enrolled at the U, where he received a bachelor’s in sociology and master’s in social work before entering the United States Air Force. 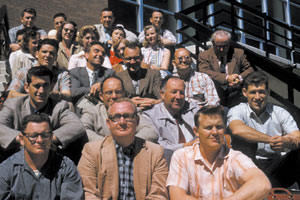 “Campus was a different place when I came to study in 1955,” he says. “[The College of] Social Work was still located in Presidents Circle, and there was nothing where we are now.”

“I was so excited to be on campus,” Farley recalls. “I chose social work because I like dealing one-on-one with people. I needed the hands-on approach of working with people and helping them.”

After a three-year stint in California, where he was the chief psychiatric social worker for Travis Air Force Base Hospital, Farley was once again pulled back to Utah, where he and Mary had strong family ties, and to the U, where this time he returned as a member of the social work faculty, going on to receive his doctorate in educational psychology. 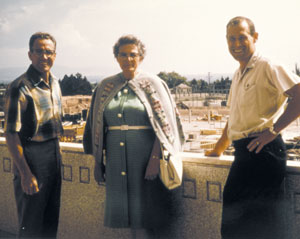 “It’s funny, I had opportunities to work just about any place in the U.S.,” he says, “but what made me stay at the U was the super students. Many of those students are now retired and have made great contributions during their careers as heads of different agencies in the social work system. It’s gratifying to know that these were my students.”

Although Farley’s students kept him based at the U, his zeal for community outreach led him to travel throughout the state. He spent 10 years working with a mobile mental health clinic that each month visited the rural areas of Southern Utah. Farley also trained paraprofessionals in Alaska. In the late ’70s and early ’80s, more than 50 percent of social workers in southwest Alaska were trained at the U or by U faculty, thanks to a grant from the National Institute of Mental Health.

“I have really enjoyed my career because I have had the opportunity of working with folks as well as teaching and doing research,” says Farley.

Part of his “work with folks” led him to his current role as director of the College of Social Work’s W.D. Goodwill Initiatives on Aging and its successful Neighbors Helping Neighbors (NHN) program. Established in 1997, NHN is committed to helping the elderly live independently for as long as possible. The program is powered by social work students and community volunteers who offer their time and talents to seniors in need of home repairs, cleaning, shopping assistance, snow removal, counseling—or simply companionship.

U of U President Michael K. Young (fourth from right) shakes hands with Bill Farley at the groundbreaking of the Dorothy P. Goodwill Humanitarian Building in 2007.

“By 2015, someone will turn 65 every 23 minutes in Salt Lake County,” Farley explains. “People don’t talk about growing older—or the ability to be cared for. There are many older citizens living in Salt Lake who are in need of assistance right now. Our program has assisted almost 3,000 older adults to live in their own homes. We are always asking the questions ‘How can we help keep them in their homes? How can we make things better for them? How can we keep their bodies and minds engaged?’ We really want to get out there and help as much as we possibly can,” he says. “Just a little bit of work and cleaning can keep them in their homes. We want to give them a sense of hope and a quality of life. That’s what the new building will help us accomplish.”

That structure, the Wilford W. and Dorothy P. Goodwill Humanitarian Building, was created to house the NHN program and the W.D. Goodwill Initiatives on Aging, as well as to provide a Senior Support Program, where seniors can come for assistance with everything from applying for Medicare to family counseling.

Working alongside the Goodwills, Farley had a vision to create these programs to help the elderly. In turn, the Goodwills saw a need and responded to it. Wilford Goodwill had watched as his aging mother’s dependence on others steadily increased. He realized that her situation was not unique, and that there was a clear need for more research and better programs for senior citizens. He became determined that when he was financially able, he would do everything possible to help others like his mother.

Over the last 10 years, the Goodwills have invested in programs at the University of Utah that help social work students become more knowledgeable about aging; their investment includes the building that bears their name.

“How can someone stay in one job for so long?” Farley muses before responding to his own question: “When you can give to folks. It’s even more fun when you can put theory into action. What’s exciting is to witness the creativity of these great students.”

Farley’s own creative impulses have produced many books, other publications, and paper presentations that reflect his varied interests in aging, human behavior, research, mental health, and rural practice. First published in 1964, Introduction to Social Work is now in its 12th edition. Farley also had the privilege of writing the Social Work Licensure Law in 1971 for the State of Utah.

How has the field changed in all this time?

“People’s problems go on,” says Farley. “But recently I’ve noticed a significant increase in substance abuse and challenges with interpersonal relations. There seems to be a lot more chaos to existence than ever before.”

Reflecting again on the challenges and satisfactions of his long career, Farley pulls himself back to the moment and says with a wide smile, “What a thrill. I’ve really enjoyed myself.” This is evident from the enthusiasm he displays while pointing out portraits of past colleagues and friends such as the Goodwills, Milt Thackey, and Rex Skidmore—“social work giants,” as he calls them—who have all been touched by and worked alongside him over the years.

Farley will retire this year at the end of June, but the thrill he describes is sure to carry on. An avid traveler, he anticipates new journeys with his family—five children (all of whom attended the U), 21 grandchildren, and six great grandchildren.

When asked how a pioneer in the field of aging feels about his own pending retirement, Farley relaxes, knowing that, thanks in no small part to his own efforts, Utah now hosts some of the finest programs anywhere for seniors—programs that can eventually benefit us all.

—Taunya Dressler is a writer with University Marketing and Communications and has authored previous articles for Continuum.

One thought on “‘When you can give to folks’”