Mike Dunn’s commitment to telling meaningful stories with film makes him a great fit as the new head of KUED.

Michael A. Dunn BS’81 MA’06 loves challenges. And in August 1994, he faced one never before taken on by a human being in Grand Teton National Park.

Dunn was on an early morning run when he came across bear tracks. “Knowing that a bear had been in the area so unnerved me,” he says, “that I slowed to a walk. Then I stopped, held my breath and listened while I looked in every direction.”

Mike was on vacation with his wife, Linda BS’81 MEd’95, now director of the U of U’s Lowell Bennion Community Service Center, and their three children. He was training for the St. George Marathon, a qualifying race for the Boston Marathon.

Dunn, at the time a writer for Bonneville Communications, had found his vocational passion in eighth grade. A filmmaking class at Rowland Hall-

St. Marks left him “intrigued with film as a storytelling medium,” he says. After graduating from East High School, Dunn studied communication at the U. An internship in the U’s Athletics Department eventually led to a “dream job” as a reporter and weekend sports anchor for Salt Lake City’s KUTV Channel 2. 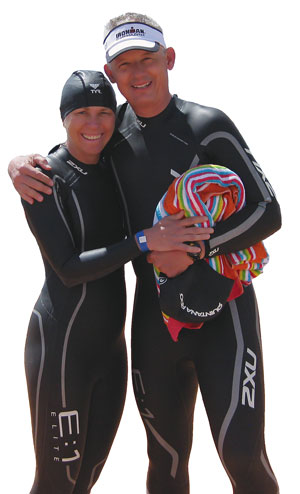 In 1984, inspired by the romanticized notion of advertising depicted on the TV show Bewitched, Dunn joined Fotheringham & Associates (now Richter 7) as an assistant account executive but eyed the creative department, “like a little kid with his nose up to the window of a candy store,” he says. Dunn soon became a copywriter.

After six years at Fotheringham, he joined Bonneville Communications and spent eight years traveling the globe writing, directing, and shooting public service ads for the LDS Church that promoted good parenting, education, and compassion. A spot featuring a disabled girl who would not give up earned him an Emmy.

Dave Newbold, president of Richter 7, who worked with Dunn at both Fotheringham and Bonneville, noticed Dunn’s leadership abilities early on. “There is a key phrase from a book about leadership: ‘modesty, restraint, and tenacity,’ ” says Newbold. “I think that’s a great depiction of Mike.”

The bear prints in the forest during that fateful morning run were followed by another warning: a pile of berries on the trail. Dunn says he quickly implemented “rule number one in bear country: make as much noise as possible,” and began singing, badly, at the top of his lungs until the dark foreboding lifted and he fell back into enjoying his run.

Two miles later, Dunn heard a “sudden and thunderous sound coming from the forest off to my left,” he says. He turned to see a huge grey- and auburn-colored bear with a hump on its back racing toward him at full speed, “teeth bared, growling, ears laid back.”

The 165-pound Dunn only managed a step or two more up the trail before the 400-plus-pound bear plowed into him, knocking him nine feet off the trail. The bear chewed and clawed Dunn’s mouth, nose, and ribs, and sank teeth into his hip and thigh.

Dunn instinctively fought back until a point when “the injuries were just so overwhelming,” he says, “I actually hoped it would be over really quick.”

But with the thought of his family, he appealed to a higher power. “There is a bear on my back,” he prayed. “I’m dying. But I want to live.” He then received the clear impression to play dead, so he stopped struggling and managed to get into a fetal position. It worked. The bear quickly turned its interest to something else in the forest, got off Dunn, and loped down the trail.

Fearing the bear would return, Dunn limped a mile down the rocky trail, screaming for help, until he was finally spotted by hikers.

Dunn’s injuries were life-threatening. With 300 stitches and a thigh muscle destroyed, he was unable to walk for a month, and it was unclear whether he would ever run again. But he worked hard, fighting his way back through months of therapy. Salt Lake Tribune political cartoonist Pat Bagley, one of Dunn’s running buddies at the time, was impressed by Dunn’s perseverance. “Not only did he continue running,” says Bagley, “but he took it up a notch, doing ultra marathons.” On May 1 of this year, to celebrate their 30th wedding anniversary, Mike and Linda both completed the St. George Ironman competition.

The bear attack, says Dunn, “emboldened me. It expanded my comfort zone, allowing me to take on new challenges while reducing my fear of failure.”

This new courage enabled Dunn in 1996 to take “a scary leap” and start his own ad agency and film production company, Dunn Communications, Inc. “I finally got to be Darrin Stephens,” says Dunn, “writing, directing, and shooting commercials,” including for Surefoot, a custom ski boot company that he helped grow from a small company in Park City into a worldwide enterprise.

It also gave him the courage this spring to step away from the profitable business he had developed over 16 years and into the role as only the seventh general manager of KUED in its 52-year history.

Though Dunn had never managed a TV station, as had some of the more than 100 applicants from across the nation, he had volunteered at KUED for more than 25 years and served on its advisory board. He had also produced several documentary films in partnership with the station. Fred Esplin MA’74—KUED general manager for 20 years and now the U’s vice president for Institutional Advancement, who led the search committee—says that Dunn has “very solid fiscal- and people-management skills, fundraising abilities, and a high aptitude for and interest in working with the community. He has a deep understanding of the state in all its plurality.” 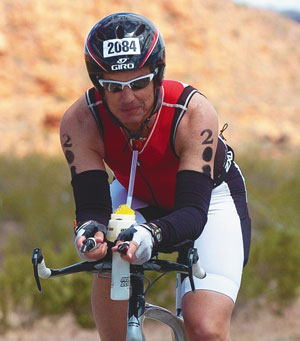 Dunn during the cycling portion of the St. George Ironman competition.

Just as important, says Esplin, Dunn has “an optimistic outlook on life and a belief in the good in people and the potential for good.”

In other words, Dunn is not the guy you would hire to promote Grand Theft Auto V. Dunn’s creative style reflects his view that “people remember what they feel more than what they read or see,” and what he wants people to feel is inspired. This, says Esplin, makes him a good match for public television, which “at the core is about enriching the human condition.”

U of U Communication Professor Robert Avery, who has known Dunn since he was a freshman, agrees, noting that “Mike’s sensitivity and compassionate commitment to utilizing the media in service to the public good” makes him a great match for KUED. In addition, says Avery, “he’s a people person and a natural diplomat. He intuitively understands others, he cares about others, and, in his gentle way, he inspires others to achieve their very best.”

KUED welcomed Dunn, a familiar face, even before he began his new role. Prior to taking the helm on May 10, Dunn was meeting one-to-one with each of KUED’s 110 employees. Linda Lane, who greets visitors and answers the phone, says, “That sent a nice message to employees that he is willing to listen and cares about our concerns.”

Mary Dickson BA’76, KUED’s director of Creative Services, adds: “Michael understands the challenges we and the industry are facing. I have no doubt he’ll skillfully usher us into a new era.”

The challenges ahead include attracting a younger demographic, developing new types of funding, broadcasting in media beyond TV, and staying “at the front of the digital age,” explains Dunn. He says he will approach these challenges with the vision of maintaining KUED’s longtime role as “Utah’s best storyteller.” And that vision returns him to what captured his imagination in eighth grade—the power of film to tell a story.

For the record, Dunn “bears” no ill will toward the grizzly. A year after the attack, he dressed up as a bear for Halloween. Dunn eventually wrote a book about the experience, and he has given motivational talks based on what he took from it. “I have felt nothing but profound gratitude for life and an uncanny affinity with bears in general,” he wrote in an essay. The bear, he notes, “never got to tell his side of the story.” The park rangers, however, did exonerate the bear, concluding that it was only trying to protect a ripening patch of berries.

KUED is a public broadcasting station licensed to the University of Utah and broadcasting the core PBS schedule as well as local programming. It is the 16th most-watched public television station in the U.S. A recent study concluded that adults ages 25-75 in the U.S.:

• believe that, in terms of the 15% of its budget that the Public Broadcasting Service receives from the federal government, public television delivers more value for their tax dollars than police and law enforcement, the space program, medical and technological research, and federal aid to college students

• feel that the money public television receives from government, corporations, and individuals is “well spent”