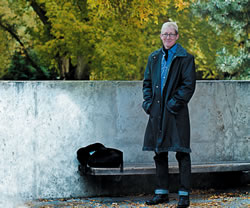 No one would confuse the road to Salt Lake City with the one to Damascus.

But for Kathryn Bond Stockton, the journey that brought her from a nearly ordained Episcopal priest to professor of English, celebrated queer theorist, and director of the University of Utah Gender Studies Program was, like the Apostle Paul’s, a spiritual journey, one filled with unexpected revelations and inspiration.

There are many different stories we can tell about ourselves, Stockton points out. This one is about how she had become an evangelical Christian at the age of 13, her religious life determined by a number of different factors: a desire to be intellectual, to be a good person, to be with kids who wanted to be serious, who didn’t do drugs and who were not allowed to act like they wanted to have sex.

It was, Stockton notes, a comforting place for a young, closeted lesbian to hide out.

At this young age, she was highly conscious of the gender roles she was supposed to occupy and how uneasily she fit into these broad categories of definition.

We are forced to rehearse our gender in many ways a hundred times a day, Stockton argues. The gender roles we assume are found in everything from the clothes we wear to our hair, our gestures, our voices—from what our gaze falls upon to how long it lingers there. Even the things we like to do, the structures we build, and the games we play are influenced by gender to one degree or another.

“How can that not make you rehearse your gender?” she asks rhetorically. “People couldn’t experience it as simple, even if they wanted to.”

As an undergraduate at the University of Connecticut, Stockton found herself drawn toward psychology and philosophy, which she confesses put some pressure on some of her religious notions. From there, she attended Yale Divinity School, with every intention of eventually becoming a priest. But ironically, it was in that environment that she met “feminists, gay people, left-leaning political types”—all manner of individuals who she realized led rich, spiritual lives while not necessarily being invested in organized religion.

Though she was cleared for ordination (still a unique choice for women in the early 1980s), the sticking point, as she puts it, was that she could not have been “out” as a lesbian (at that time) and still been ordained in the Episcopal Church in the Connecticut Diocese.

By this time in her life, she had no interest in being closeted, regardless.

As this door seemed to close to her, another window began to open. While she waited to see whether the church would resolve this obstacle, Stockton began a master’s program in English Literature at Brown University. The “remarkable symmetries” she found there among her interests in spirituality, Victorian literature, and emerging post-structuralist theories about language and gender helped her define religion in different ways to herself and ultimately served as the foundation for her first book, God Between Their Lips: Desire Between Women in Irigaray, Brontë, and Eliot, published by Stanford University Press.

“I’ve never considered myself as having lost my faith,” Stockton reflects. “Rather, I’ve watched it change and move in new directions.” 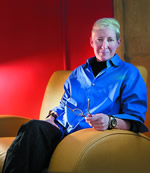 Stockton in her U of U office.

As she punctuates each syllable, Stockton stresses the presumption that lies at the heart of queer theory: that the most simple questions about gender just aren’t all that simple.

The unconscious understanding of our dominant culture, she argues, is that these are complicated issues, as evidenced by the proliferation of debates about the “natural” (even nonbiological) differences between men and women.

“The very notion of heterosexual unions is itself strange,” Stockton says. “Let’s say men and women are actually somehow ‘opposites.’ So, you are going to take two people who are so-called ‘opposites’ and have them make a harmonious life based on the presumption of fundamental opposition?”

In part, Stockton’s work is an investigation of the currents and contradictions in our own professed “settled” understanding of gender and the exposing of its inherent strangeness.

“Don’t look there, they want to say. It’s black and white, men and women are different—you can only come up with this highly pristine version if you take no history or anthropology into account. Once you do so, everything else falls apart.”

Her research, then, doesn’t question the “norms” of society as much as it takes them far more seriously than their proponents seem interested in doing themselves.

“What they’ve defined as ‘normal’—heterosexual, monogamous nuclear family—is not even ‘normal.’ If that’s your idea of normal, then few would even qualify. And you wouldn’t have any need for the instruction and rigid rules they insist upon if it were natural.”

Stockton’s latest book, The Queer Child: Growing Sideways Through the Twentieth Century, observes that throughout the 20th century, there existed little public discourse on gay children, except among a very few major novelists and filmmakers in whose work the gay child lives and breathes.

But now we’re a culture that’s finally recognizing these children who may see themselves as “gay” and may have a relationship to that word—and that relationship might be happy, fearful, terrified, anxious, and/or excited, she argues. This “gay” child could tell us about the interesting, complicated, painful, and pleasurable complications of childhood that we might otherwise tend to deny.

By questioning the unquestioned “truths” about sex and gender, gender studies is often painted with the cartoonish stereotype of an anti-male curriculum, charges that have dogged programs of this sort since their emergence from second-wave feminism in the 1970s. But that caricature bears little resemblance to reality.

“Like other domains of study, there are no predicted answers to questions or predetermined responses—nothing of the sort,” Stockton explains. “People have very different views from each other, even about what the term feminism means. Gender studies swings more in the direction of looking at gender as a category of analysis.”

And gender studies isn’t focused on analyzing gays and lesbians as a specific subgroup. Instead, it investigates how a central concept like sexual identity is conceptualized through cultural artifacts (such as novels, poems, art, and film), and also how myriad aspects of our society—from architecture to economic theory—are (sometimes surprisingly) gendered.

Today’s gender studies program at the U grew out of a smaller Women’s Studies program that began in the ’70s. That program, which found another relevant model in existing ethnic studies programs, was in its most narrow form focused on the perceived “women’s issues” and experiences.

Stockton joined the program as soon as she arrived in Utah in 1987, and she assumed the directorship of Women’s Studies in 2000. Two years later, the program changed its official name to Gender Studies to broaden its official focus and better reflect its emphasis on exploring how gender is received, performed, and asserted within the larger culture.

In the 2009 external analysis of the Gender Studies Program, reviewers praised the program as a whole and Stockton’s scholarly contributions and leadership as “dynamic and visionary.”

That she ever came to Utah at all, however, is something of a minor miracle.

Growing up in New England, Stockton had lived her entire life in what she calls “East Coast provincialism.” After completing her doctorate at Brown, she was a highly coveted academic in an emerging field. Her decision to come to Utah ran against the nearly unanimous advice of her professors and peers, and she turned down several job offers in the process, including an enticing position at NYU.

“There was silence on the other end of the phone when I told them I’d taken a position at Utah, instead,” she remembers.

Certainly, Stockton herself fully understood that she was doing something unconventional. But what drove her was a desire for an experience unlike anything her previous education and life had provided her.

Even she, however, was surprised that she ended up staying.

“I thought I would come out here, have adventures, get great stories to tell at cocktail parties, and then get back to where I ‘belonged,’ ” she recalls. “I was hungry to see something different and attracted to the idea of an adventure in a different landscape and climate.”

Still of a mind not to follow advice, Stockton rejected the suggestion by some that she “dial down” her engagement with gender and theoretical issues in the classroom and teach more conventional courses for which they assumed Utah students would be more prepared.

“Instead, I designed exactly the kind of course I would have taught at Brown. And students rose to the challenge.”

What she found “deeply satisfying” was seeing students coming out of the woodwork, “desperate,” as she puts it, to hear about feminist studies, gay and lesbian studies, and—soon after—queer studies.

“When I arrived, no one on campus had had a professor who said they were gay. They had never met an out gay person, much less a professor.”

Once she settled in, Stockton realized she’d made a better choice than she thought.

“Almost immediately, I felt comfortable. It was the students: their passion, their unquenchable desire to be challenged. There’s no way I would have stayed here if I hadn’t loved teaching, and that’s entirely dependent upon the students.”

Despite her career shift from ordained minister to academic, her interest in spirituality has never waned, and, in fact, the deep ties to religion held by many of her students as well as in the broader culture of Utah offered her the opportunity to continue her own exploration of faith. Her students’ interests dovetailed “intensely” with her own.

“Two things you have to combine together in a classroom: a high level of difficulty and warmth. Maybe it’s true everywhere; students want to feel like you care about them and you’re interested in what’s in their heads.

“If you convey that to students,” she says, “they will follow you off any cliff you provide.”

—Paul Ketzle is an instructor in the University of Utah Honors College and the U’s LEAP and Writing programs. He has written many previous articles for Continuum.