A NEW TRACK AND FIELD GIVES THE U A WORLD-CLASS TRAINING AND COMPETITION VENUE. After nearly 30 years of borrowing various facilities around the Salt Lake City area, the University of Utah track and field team opened its outdoor season this year with a prominent new accessory: a new track to call its own. As […]

We MUSS, We MUSS!

The Mighty Utah Student Section raises fan loyalty to a new level. Photos by MUSS member Dan Brinton University of Utah Senior Joe Meng-Yuan Li loves his school, loves his school’s football team, and loves being with people who share his school spirit. So he spends most football home-game days standing, screaming, and jumping amidst […] 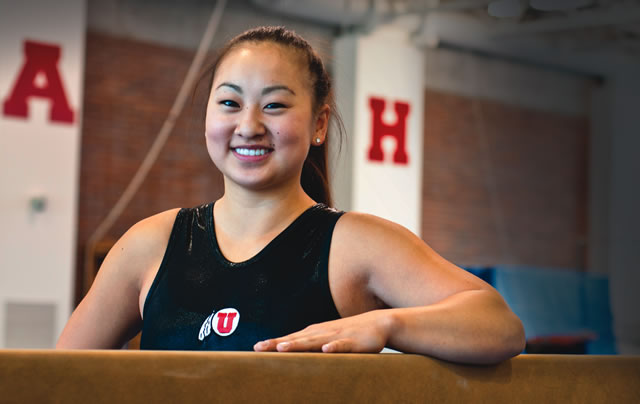 Photos by Lawrence Boye. Corrie Lothrop brings a fresh face—and a long list of accomplishments—to the U of U gymnastics team. Newly arrived University of Utah gymnast Corrie Lothrop smiles when she tells you that she started gymnastics at the ripe old age of 2, in her parents’ gym, Yellow Jackets Gymnastics in Middleton, Mass. […]

Part of the Pac

Looking Out for the Lakers

Two U of U grads help the NBA champions stay on top of their game. In the Los Angeles Lakers’ locker room, superstar Kobe Bryant changes into his jersey, then rubs his ankles. The 6-foot-6, 205-pound guard is all muscle, but for this afternoon’s practice session, some of his joints and tendons will need a […]

That’s Just How It Was

Is the Fountain of Ute magic, or myth?