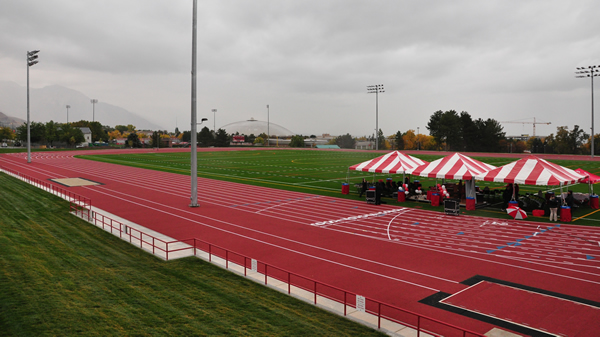 A NEW TRACK AND FIELD GIVES THE U A WORLD-CLASS TRAINING AND COMPETITION VENUE.

After nearly 30 years of borrowing various facilities around the Salt Lake City area, the University of Utah track and field team opened its outdoor season this year with a prominent new accessory: a new track to call its own.

As the outdoor portion of their home season officially got under way in mid-April, the Utes were quite happily adapting to their new $2.6 million McCarthey Family Track & Field, which was completed in late 2010.

The new facility has engendered a kind of fresh start for the Utes all the way around, says Kyle Kepler, in his sixth year as head coach of the team.

“As the new home for our track and field program, this facility gives our student-athletes a world-class training and competition venue,” Kepler notes.

It certainly reduces the wear and tear on a Utah team that had somewhat unbelievably gone more than 28 years without a track (since an expansion of Rice Stadium in 1982, when the track there was removed). Over the years, the athletes made do by “borrowing” others’ facilities, which made practicing difficult and reduced any competitive advantage to almost nothing.

Nevertheless, the Utes have persevered. And after nearly 30 years, they again have a home of their own.

The track is a 400-meter, Beynon Sports Surface with nine 42-inch wide lanes. The interior has a 75-by-125-yard Astroturf field, along with areas for throwing and jumping events.

Last October, the McCarthey family was on hand as University of Utah administrators officially cut the ribbon on the state-of-the-art facility, financed by a lead gift of some $2 million by the McCartheys (with additional funding from the U’s Campus Recreation Services and Administrative Services departments).

“The McCarthey family has always been very generous throughout our community,” notes U of U Director of Athletics Chris Hill MEd’74 PhD’82. “We are very excited that they were so charitable to our program and made this long-awaited track a reality.”

“We believe that people of all ages need to have a place to run and jump and play games,” says Phil McCarthey, a dedicated supporter of the U, especially its Athletics Department.

Located at 98 S. Wasatch Drive, just north of the Ute Softball Field, the track and field is illuminated for night use by four banks of permanent lights. There is lawn-style seating for spectators on the track’s east side. And, during designated times when the facility is not being used by Utah athletics, or campus or club sports, the track is open to the public.

“It will not only serve our student-athletes,” notes Hill, “it will also benefit many other groups and individuals throughout the campus.”

Comments Kepler, “The McCarthey Family Track & Field will also send a very clear message to prospective recruits about the vision of our program’s future, which includes developing some of the best track and field student-athletes in the country.”

The new facility’s benefits to the team will be obvious immediately, Kepler adds. “It’s monumental in so many ways,” he says, noting the competitive advantage the cutting-edge track facility will deliver. “But we’ll also be able to have a more flexible practice schedule, which will enhance the academic opportunities for our student-athletes,” says Kepler. The coach presses his athletes on fundamentals, preparation, and academics, and the results speak for themselves (in 2009-10, five of the team’s cross-country athletes and 20 athletes from the track and field team earned academic all-conference honors).

“Since Coach Kepler has been at Utah, all of his teams have had cumulative GPAs above 3.0, and they have been recognized with All-Academic awards from the women’s Cross Country and Track and Field Coaches Association,” notes Robert Rainey, an academic advisor for the U’s Athletics Department. “Kyle truly recognizes the importance of the balance between academics and athletics.”

Cutting the ribbon on opening day.

The youthful Kepler took over the helm at Utah in 2005 after serving as head coach of the men’s and women’s cross-country team at Northern Iowa, his alma mater. A former varsity athlete for UNI, Kepler was both a cross-country and track participant, as well as team captain during the 1997-98 school year. Those personal experiences—along with his attention to detail and organizational skills—are what have made him an energetic, steady presence for the Utah women, who have progressively improved during each of his seasons at the U.

“Kyle is a fine young coach who does things the right way,” says Mike Jay, a longtime announcer for USA and NCAA track & field and cross-country events. “He is not afraid of hard work. He will continue to raise the bar for Utah.”

“Kyle develops athletes in such a way that they are physically and mentally prepared to do their best,” Jay adds. “His athletes lay it on the line for him, because they know he is with them every step of the way.”And their new facility will help Utah’s student-athletes stay on track.

Fielding questions and keeping track of the U’s deep tradition in the sports.
By Roy Webb

Track and field competition has a long history at the University of Utah, starting even before the school moved to its present location in 1898. As early as the 1880s, there were “University Days” at what is now Nibley Park (in South Salt Lake) that featured races and athletic contests. In May 1895, the first track and field competition between the University of Utah and the Brigham Young Academy was held in Provo. In that competition, and many subsequent contests, the U dominated the other schools in almost every aspect of the sport.  These early competitions were not well organized, however, and often resulted in spectators crowding onto the track and chasing the runners “like a stampeding herd, amid yells of triumph and dismay,” according to Walter A. Kerr’s Intercollegiate Athletics, University of Utah, 1892-1945. On occasion, they even resulted in “red-hot slugging matches” between partisans of the two schools “in which Easter bonnets were wrecked beyond identification.”  Within a few years, things settled down to a more orderly routine, and by World War I the University was participating in track and field competitions both within the state and around the region. An article in The Daily Utah Chronicle from April 1919 noted that “Cummings field is fairly alive with track and baseball men every night. The advent of good weather has caused a host of athletes to hie to the old grid field for competition and spring training.”

The “young and enthusiastic” coach Ike Armstrong (as Kerr described him in his book) was hired in 1924, and besides coaching football, he encouraged all male students to try out for track and field.  One problem was the lack of a field house where athletes could train in bad weather, but that was rectified with the construction of the Einar Nielsen Field House in 1939.

By that time, women, too, were beginning to compete in intramural track contests, although an organized team was still in the future. World War II interrupted most athletic competition at the University, but in the 1950s, under coach Pete Couch, “Utah cindermen” like Fred Pratley BS’57, Gerald Tovey ex’55, and Herb Nakken BS’57 set state and regional records. Throughout the ensuing decades, University track and field teams, both men and women, continued to prove that the University of Utah was a force to be reckoned with in any kind of athletic competition.

7 thoughts on “Staying on Track”