Two U of U grads help the NBA champions stay on top of their game. 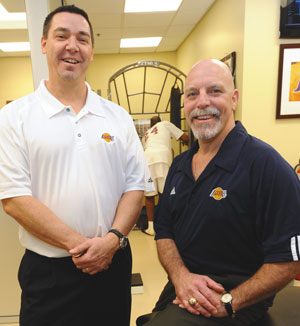 In the Los Angeles Lakers’ locker room, superstar Kobe Bryant changes into his jersey, then rubs his ankles. The 6-foot-6, 205-pound guard is all muscle, but for this afternoon’s practice session, some of his joints and tendons will need a little attention.

A call goes out to Athletic Trainer Gary Vitti MS’82 (sports medicine), who has been keeping the Lakers on their feet—literally—since 1984. A locker room attendant finds the affable Vitti in the hall, visiting with an old friend.

“Kobe needs his ankles taped,” the young fellow says hurriedly, as if the weight of the world is on his shoulders.

Vitti excuses himself, then speeds off to the locker room. When one of the NBA’s premier players—or even a benchwarmer—requires care, Vitti swings into action.

But Vitti, 55, isn’t the only University of Utah alumnus working to make sure the NBA’s 2009 championship squad stays healthy. Director of Athletic Performance/Player Development Robert “Chip” Schaefer BA’83 (physical education and sports medicine) is also entrusted with the care and prevention of injuries to players. Together, these Utes create conditioning programs that stress fundamental stretching exercises, proper nutrition, and preventative health testing. And when a player is injured, Vitti and Schaefer will design a personal regimen for that athlete to help get him back out pounding the parquet.

As the Lakers jog onto the practice court this afternoon and begin tossing basketballs around, Vitti ruminates about what the NBA was like in his first season, 26 years ago.

“We had 12 players, a head coach, and two assistant coaches—and one of those assistants I never saw, because he was the advance scout,” he says. “We didn’t even have a practice site. We were like vagabonds; one day we practiced at Loyola, the next at Cal State LA or at a YMCA. Teams didn’t have physical therapists or strength coaches. I was one of the first.”

The most recent Lakers team photo features 30 members, including players, coaches, and support staff, he says.

Today’s basketball players aren’t as good as they were “in the old days, but today we have better athletes,” Vitti claims. “[Earvin] Magic Johnson, Larry Bird, and those guys, they couldn’t jump over a piece of paper. But they were great basketball players—they could dribble, pass, and shoot. Today’s players don’t dribble, pass, or shoot, but they can blow by you. They’re quicker, stronger, and more muscular.”

And treating players’ aches and pains has moved from bandages and splints to high-tech diagnostics that include MRIs and ergonomic flow charts that track how an athlete moves, from the soles of his feet to the top of his spine.

One of the players who impacted the face of sports medicine was former Laker Magic Johnson, who announced his retirement before the 1991-92 season after testing positive for HIV. However, fans voted him as a starter in the 1992 All-Star game, and he was a member of the 1992 U.S. Olympic team. He attempted a comeback with the Lakers before the 1992-93 season but announced his retirement after playing in some preseason games, citing complaints from several players over his return.

“At the time, the biggest thing I had to do was protect Magic from everyone else, because of his compromised immune system,” Vitti remembers. “Some people didn’t want to play with him and wondered how they could protect themselves from the virus. We kept telling everyone, ‘You can’t get the virus from playing with him.’ One game, he got a fingernail scratch I had to bandage, and I was about to go for my gloves in my back pocket when I thought, ‘We’re telling the world every day that there’s nothing to worry about, and here I am about to put on gloves to treat a non-bloody wound.’ I didn’t want to send a mixed message, so I kept the gloves off. But Magic knew what was going on, and the next day he retired.”

Johnson attempted another comeback during the 1995-96 season, playing in just 32 games before switching to a coaching position.

Before Schaefer, 49, joined the Lakers in 1999, he spent eight seasons with the Chicago Bulls, where he kept superstars like Michael Jordan and Dennis Rodman at the top of their game. During his tenure, the Bulls won six NBA Championships.

“Michael would always play, no matter how sick or hurt he was,” Schaefer remembers. “No matter what I or anyone else did for him, he would play brilliantly and make it look like somehow I had something to do with it. I, of course, did my due diligence with regards to any injury treatment and rehabilitation, but he was going to play no matter how he felt, and therefore he made me and everyone else look good in the process.”

As for the flamboyant Rodman, Schaefer says, “In private, Dennis was far less colorful than his public persona, and he was actually a delight to work with. He was a very generous person and very low-maintenance.”

Besides helping the Lakers fine-tune their athletic performances, Schaefer also helps players from overseas and rookies drafted out of college get acclimated to the fast-paced NBA lifestyle.

“Professional athletes are getting younger and younger, and they’re wrestling with adaptation issues,” he says. “Everything we take for granted, from balancing a checkbook to making sure our driver’s license is valid and we have proof of insurance, are things that some of these guys have never had to do for themselves. So, some of my job includes an educational component. I also help some of those who come out of college early register for classes in the off-season so they can continue going to school to earn their degrees.”

In the off-season, Schaefer and Vitti also have a number of other projects that keep them busy. Schaefer is an examiner for the National Athletic Trainers Association’s certification test. Vitti lectures at sports medicine seminars around the world, including those in the Philippines and Italy, where he owns a house that has been in his family for more than 400 years. He has also written a monthly column for Sports Medicine Digest and produced “Training for Excellence,” a conditioning video.

But of all his accomplishments, Vitti is most proud of his philanthropic work. In 1991, he created the annual NBA Trainers Association Superstar Sports Auction, which has now raised hundreds of thousands of dollars for various charities. (Vitti was awarded “Trainer of the Year” in 1991 for the project.) He also helped found “A Window Between Worlds,” a nonprofit organization dedicated to using art to help end domestic violence.

“I knew a woman who grew up in a house where there was domestic violence, and I saw firsthand how a child who grows up in that kind of environment ends up as an adult,” Vitti says. “It broke my heart. ‘A Window Between Worlds’ helps domestic violence survivors use art to express their feelings in a way that they might not be able to do otherwise.”

Both Schaefer and Vitti recall fond memories of the U. Schaefer’s wife, Andra ex’82, was a member of the Ute gymnastics team. And while Vitti was pursuing his master’s degree, he began working in the NBA as an assistant trainer with the Utah Jazz while also teaching at the University.

“He was one of my teachers,” says Schaefer, gesturing toward Vitti, who now works beside him.
Vitti smiles shyly, then says that if it weren’t for former U of U professor Bill Bean BS’79 MS’86, “I wouldn’t be here today. He was a great mentor who not only taught me everything I know about sports, but also how to deal with athletes and coaches. You can be the best trainer in the world, but if you can’t interact with people around you, then you’re just a smart guy who can’t communicate.”

Bean, the Athletics Department’s former director of sports medicine, retired in 2008 after teaching at Utah for 32 years. “They’re still both very close friends of mine,” Bean says of his former charges. “They were both very eager students who developed a love for sports medicine, and they’ve done a great job in their careers.”

And how often did Vitti and Schaefer call to ask their teacher for advice? “I used to ask them for advice,” Bean says with a laugh.

—Benjamin Gleisser is a Toronto-based freelance writer with more than 20 years of sportswriting experience.