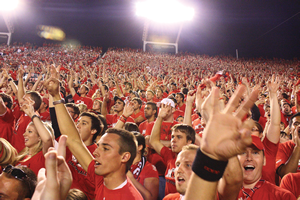 University of Utah Senior Joe Meng-Yuan Li loves his school, loves his school’s football team, and loves being with people who share his school spirit. So he spends most football home-game days standing, screaming, and jumping amidst a similarly committed bunch of student fanatics who fill the southeast corner of Rice-Eccles Stadium.

Li belongs to The MUSS, which took its name from the University of Utah’s fight song, “Utah Man”: We’re up to snuff, we never bluff, we’re game for any fuss; no other gang of college men dare meet us in the muss. Muss is a noun that means a state of disorder; as an acronym at the U, it has come to mean “Mighty Utah Student Section.”

Mighty is the appropriate word to describe this student fan club. On the rare occasion that Li, an accounting major and a member of the ASUU executive cabinet, sits elsewhere with friends or family, he has a chance to observe the group from afar. “It is an inspiring sight to look to our corner and see a massive glob of the stadium jumping up and down in a frenzy, yelling and waving flags and signs,” he says.

Adds MUSS President Travis “TJ” McMullin, “As a college student, being part of The MUSS is the best part about weekends.”

WHAT IT IS, WHERE IT CAME FROM

The MUSS evolved from the Utah Football Fan Club (UFFC), which was created from student input at a meeting of the Alumni Association’s Undergraduate Quality Committee. One student member, an avid football fan, lamented the lack of students showing up at the gridiron on game day. Moreover, he complained that getting good seats meant standing in line for a few hours before the gates opened—forgoing any chance to tailgate with like-minded fans.

Taking the feedback to heart, the U of U Alumni Association and the Athletics Department conceived the UFFC to provide members with reserved seats and, most important, a community of fans who could tailgate together and beef up student support for university athletics.

John Fackler BS’89 BS’94 MprA’95, director of alumni relations at the Alumni Association, and Kim Raap, assistant marketing director of Athletics, were given the task of creating the UFFC. In 2002, they assembled a board of nine students and got moving. Their goal of attracting 300 members that first season was shattered when 800 students signed up. The following year, membership swelled to 1,400, and the name was changed to The MUSS after board member Eric Larson BS’04 found the term in the fight song. (Scott Hammer BA’04, the first president of The MUSS, soon thereafter gave the acronym its meaning.)

Today, The MUSS has more than 6,000 members and is governed by a board composed of 40 students. Students can now also join under other sports: in addition to football, there’s a MUSS for men’s basketball, as well as women’s gymnastics, volleyball, and soccer. The Football MUSS is by far the most popular, and registration reaches its maximum of 6,000 quickly every year. Annual membership costs $30 and includes a signature T-shirt that members wear on game day. Each member is guaranteed a reserved seat at home games and admittance to pre-game tailgates where the attractions include free food and prize giveaways, along with the occasional pep talk from a coach.

Brynn Whitchurch BA’05, Fackler’s assistant and MUSS coordinator, was a junior when she and a number of friends joined The MUSS in 2003, its second year. She says that word-of-mouth had made attending a Ute football game at Rice-Eccles Stadium “the thing to do on a Saturday” with your friends. “That’s how I think The MUSS has grown,” she says. “The biggest thing is, if you don’t have anyone to go to a game with, you’re not going to go.” The MUSS offers the instant company of thousands of like-minded friends.

That year, 2003, also marks the date that head football coach Urban Meyer came to town. There’s an enduring myth that he started The MUSS, probably because he was a major supporter and did a lot to boost its membership. Before even coaching his first game, Meyer attended a MUSS board meeting, an event that Fackler says “was sort of like having the Pope show up at the local parish.” Meyer also attended a year-end Alumni Association party where, according to Fackler, he encouraged students to join The MUSS because, said Meyer, “This is my chance to coach here and your chance to go to school here. We’re in this together. I need you in the stadium.”

“[Coach Meyer was] one of the biggest reasons I joined The MUSS,” Whitchurch acknowledges. “He had that energy and that spirit, and it was so contagious when he came on this campus. He is a huge part of the success of The MUSS. That’s a very rare thing, to have the football coach take time out of his busy schedule to help the student fan club.”

Coach Kyle Whittingham carries on the tradition—“even better than Urban Meyer,” says Fackler—and with good reason: He considers The MUSS “the defining characteristic of game day at Rice-Eccles. The emotion, the energy, the passion they provide to that game-day atmosphere is great,” he says. “It gives us a boost, and players feed off their energy.” In return, Whittingham and his assistant coaches and players often help The MUSS recruit new members. “We’ll do whatever we can to help them out,” he says.

THE MUSS IN ACTION 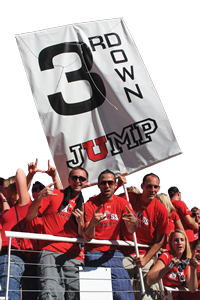 MUSS members have responsibilities based on what are called “MUSS traditions.” For starters, during football matchups, everyone stands during the game. Then, when the Utes are on the offensive, silence is demanded. But when the opposing team has the ball, all hell can—and does—break loose. The “third-down jump”—when the entire MUSS section jumps repeatedly on the aluminum bleachers trying to force a false start—is unnerving to sit amidst. Never mind what the opposing team must feel.

There’s method to the mayhem. Li explains: “The MUSS is so loud and rowdy that it causes opposing teams to jump offside at a higher rate than they typically do.” Crowd noise is important when the other team is on offense, he says, because if the other team cannot hear their quarterback’s call for the play, the offensive linemen are much more likely to “jump” before the ball is snapped. The result is a false start that carries a five-yard penalty.

Naturally, a Ute touchdown kicks things into high gear. “After each score, The MUSS is rocking as the students celebrate together,” says McMullin. “Total strangers embrace, friends exchange high-fives, and opponents are left wishing they had a MUSS to call their own.”

The fierce loyalty and enthusiasm of The MUSS is not lost on Utah receiver Shaky Smithson. “I always try to look toward The MUSS after I finish my run or anything I do, because I know they’re going to be yelling my name and screaming,” he says. “They stand up the whole game no matter if we’re down or if we’re up. I appreciate The MUSS—a lot.”

The MUSS engenders a great deal of loyalty, and not just among present and past members, players, and coaches. In fact, The MUSS has its own fan base, made up of friends, families of members, and younger Utah fans who hope someday to join. Imitation, as the saying goes, is the highest form of flattery, as demonstrated by a few local schools. Olympus High School has come up with The MOSS (Mighty Olympus Student Section); East High School has its MESS (Mighty East Student Section), whose president, notes Whitchurch, plans to enroll at the U specifically so he can join The MUSS.

Fackler shares a similar story. “A few years ago, [Alumni Association Executive Director] John Ashton [BS’66 JD’69] was talking to someone who said, ‘My daughter just got admitted to the U.’ And John said, ‘Well, what’s she going to study?’ And he said, ‘I don’t know—she just wants to be in The MUSS.’ ”

—John Blodgett is a freelance writer based in Salt Lake City.

One thought on “We MUSS, We MUSS!”