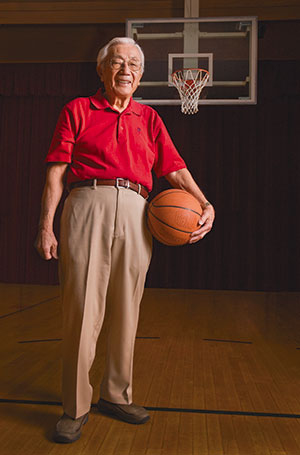 Wataru “Wat” Misaka BS’48 never tried to make history. He just wanted to play basketball—at the same time that his government was keeping 120,000 of his fellow Japanese Americans locked up in concentration camps. World War II may have stoked America’s racist streak, but Misaka—a fast, tenacious, 5’7” point guard—played through. His intensity sparked the University of Utah’s miraculous drives to 1944 and 1947 championships. And later, the New York Knicks made him the first person of color in what eventually became the NBA.

On March 19, 1944, rain pelted the Ozarks. A man and his wife drove north that night on Highway 71. Cresting a hill, they saw a station wagon with a flat tire. It was too late to stop. The collision killed the Arkansas University athletic director and critically injured two starters, days before the National Collegiate Athletic Association western regional. Arkansas dropped out, and the NCAA needed a new sixth seed. They sent an urgent telegram to Utah basketball coach Vadal Peterson.

Peterson was in New York City, lamenting Utah’s loss to Kentucky in the first round of the National Invitational Tournament. It was a war-torn season. At the U, the Army had taken over the Einar Nielsen Field House. Few schools could muster a team. Utah had managed to win18 games without a home court, playing against teams like Colorado College, Bushnell Hospital, and the Wendover Bombing Quintet. Invited to both post-season tournaments, Utah had chosen the NIT, which offered more money and prestige. Now the NCAA offered a second chance.

The team caught the next train to Kansas City. Wat Misaka shared a top berth with lanky forward C. Arnold “Arnie” Ferrin BS’66. Now a longtime friend, Ferrin recalls amiably of their years of acquaintance, “We played a lot of bridge.” They also played some ball, burying hooks and jumpers in the age of the two-hand set shot, perfecting the drive-and-dish before it officially existed. Missouri and Iowa State couldn’t keep up, so Utah headed back to New York for the final.

Almost 15,000 fans packed Madison Square Garden, a record for college basketball. Bettors favored Dartmouth, but Utah’s exciting style won over fans and sportswriters. Ferrin scored 22 points, but the crowd cheered loudest when Misaka snatched passes and rebounds from taller opponents. The “live five with the jive drive” jumped in front, then held on to win 42-40 in overtime.

But Misaka’s clock was about to strike midnight. Back in Salt Lake City, his mother waited with the crowd at the train station, holding his draft notice. He carried it through the victory parade, across downtown and up University Hill. Teammate Masateru “Mas” Tatsuno ex’44 got the same treatment, although he hadn’t made the trip back East. “The team could only afford to take nine players,” Misaka remembers. “All through the tournament, one of the coaches had to put on sneakers so we could practice.”

Soon after, Misaka drove with Tatsuno to a cluster of wood-framed bunkers in the desert near Delta, Utah. As a personal trophy, each player had received a red blanket embroidered with a white U and a championship emblem. In a ceremonial gesture, Misaka presented his teammate’s blanket to the Tatsuno family, who had been forced to leave their home in San Francisco and move to the Topaz War Relocation Center. Mas’s brother Dave captured the visit on the smuggled camera he used to film footage there, the only images ever shot of life in the camps (now on the National Film Registry at the Library of Congress).

Misaka, born in Ogden, Utah, was raised in virtual apartheid. Excluded from extracurricular activities, nisei children played in their own baseball leagues. Reared in the basement of his father’s barber shop—between a bar and a pawn shop on 25th Street, where brothels abounded—Misaka was denied service at restaurants and avoided on the street, even after leading Weber Junior College to two championships. “That’s just how it was,” he says.

Through it all, Misaka somehow still believed in America. And he poured his heart into playing basketball, like his teammates. “I never saw myself as any different from the guys I played with,” he says. “They were all white. So I felt white.”

As a soldier in the U.S. Army, he was sent to language school in Minnesota and assigned to a military intelligence unit destined to join the invasion of Japan. But the atomic bomb changed everything. After the war ended, the unit pioneered a new social science, executing the U.S. Strategic Bombing Survey. Shuttling between Hiroshima and Yokohama, the soldiers interviewed Japanese civilians about the effects of bombing on morale. They were ordered to neither help nor console. “We couldn’t say anything that would influence their responses,” he says.

Misaka’s family came from Hiroshima prefecture and almost moved back after his father died in 1939. He tracked down the house where he might have lived. A hill had protected it from the atomic blast. He approached unannounced, startling his uncle with his uniform until the uncle learned who he was. “I was a man without a country,” Misaka says. “To the Japanese, I was an invader. Americans didn’t trust me because I was Japanese.” 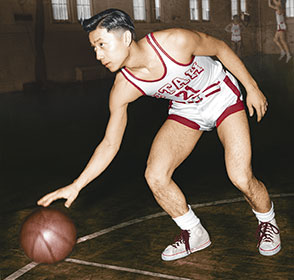 In 1947, Misaka returned to the U. Belonging to a team felt like shelter. He learned of tryouts from a poster in the gym and showed up with two old teammates, Ferrin and Richard “Dick” Smuin BS’50, who were installed as starters. Misaka was relegated to the sixth team, forced to claw his way up.

“He never wanted to be a cause celebre,” says Ferrin. Instead, Misaka outworked every man on the court, no matter the assignment. “He didn’t know he was 5’7”. He thought he could play any position. He would play center if you asked him to.” Misaka made the team but rode the bench, left home from the pre-season tournaments. But when two starters caught the flu, Misaka took one of their spots and never surrendered it. His performance tied the coaches’ hands—and irked opposing fans.

Road games were as bad as ever. Rednecks shouted wartime catch-phrases. Veterans from the pacific theater brought their hatred home. “Everybody our age fought a terrible war,” Ferrin says. “They had friends killed. There was an animosity. Wat suffered the effects of that.”

But another fairy tale scenario awaited Misaka. Back in the NIT in 1947, the Utes marched to the final against Kentucky, a basketball school with an all-white team. The defending champs belonged to a tradition that had made Adolph Rupp the NCAA’s winningest coach. They had trounced Utah in 1944. Their star, 5’10” Ralph Beard, was the best and fastest player in America.

Misaka took the floor of Madison Square Garden with one task: stop Beard. For 20 minutes, he unleashed the speed his teammates resented during one-on-one drills. He harassed the star at every turn, beating his first step, batting away the ball. His defense sent Beard to the bench for most of the second half. “They had to take Beard out,” Peterson told The Salt Lake Tribune. “Misaka had him crazy.” In the end, Utah beat Goliath, 46-40.

The PA announcer read voting results for the tournament’s most valuable player. Utah center Vern Gardner BS’49 came first. Angry boos filled the arena until the fourth name was read: Wat Misaka. “New York was more cosmopolitan,” Misaka says. “They saw me for what I was: a basketball player.”

That summer, the Knicks picked Misaka to play for them in the new Basketball Association of America. While Jackie Robinson was breaking baseball’s color barrier, Knicks owner Ned Irish handed Misaka a $4,000 guaranteed contract. That was two years before the BAA and National Basketball League merged, and three before the NBA’s first African Americans arrived. Misaka endured his own hazing to make the regular season roster. “The team was set,” he says. “I figured I was in.”

After two home wins, the Knicks traveled to Rhode Island and beat the Providence Steam Rollers. Through three games, Misaka had seven points—respectable for a rookie off the bench. But Irish called Misaka into his office the day after the third game. He gave no explanation. He just said the coach was going in a different direction. On November 19, 1947, basketball’s Japanese Jackie Robinson was cut. He never played basketball again.

Misaka went on to become a successful electrical engineer. Now retired, he still consults for a friend’s circuit-board business in South Salt Lake. He and his wife, Katie BS’51 MA’61, have two grown children and recently celebrated their 57th anniversary. Wat, now 86, is still an active bowler and golfer today.

In 1999, Misaka was inducted into the Utah Sports Hall of Fame, and at the 2009 NBA all-star game, he was welcomed as an NBA Legend and rubbed shoulders with some of the NBA’s best players. His picture and brief history have been placed in the Naismith Basketball Hall of Fame in Springfield, Mass.

Although he has spent much of his life shying away from the limelight, Misaka participated in a documentary film due for release this year, called Transcending: The Wat Misaka Story. He has recently spoken to several reporters, and someone in Japan has written a biography. Yet he still prefers the quiet, unassuming life he has built, and is generally uncomfortable with all of the accolades and attention. He never tried to make history—he just wanted to play basketball.
Sometimes, history doesn’t give you a choice.

5 thoughts on “That’s Just How It Was”