Chris Hill speaks at the press conference announcing the U’s decision to join the Pac-10. Photos by Christopher Evans, Utefans.net

The University of Utah’s long-awaited dream of joining the Pac-10 finally comes true.

Until the end, it was never a fait accompli. When it came down to it, news that the University of Utah had been invited to join the prestigious Pacific-10 Conference (Pac-10)—rumored, buzzed about, mulled over, discussed for months—really came down to a frenetic final few days, in what turned out to be a perfect storm of opportunity, preparation, and circumstance.

Both University of Utah President Michael Young and Athletics Director Chris Hill MEd’74 PhD’82 admitted as much following the Pac-10 invitation and subsequent announcement in mid-June.

“I was up and down like a yo-yo [in the final few days],” notes Hill. “We had been having conversations off and on for the past several months. But until the very end, everything was really still up in the air.”

The U’s athletics director since 1987, Hill had been fielding questions about the Pac-10 possibility for months and basically had to demur such conjecture, wanting to avoid putting the school in a vulnerable position.

“It came together suddenly, but it’s something we’ve been working on for a very long time,” says Hill, who was quick to acknowledge the U’s reputation as a top-flight academic and research institution for opening as many Pac-10 doors as its athletics accomplishments. “Our faculty response, our alumni response, and the response of the community overall has been much more than I could have ever anticipated.” 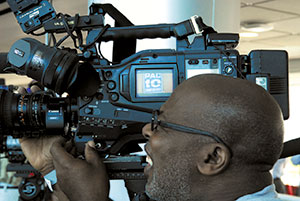 Local and national media captured every moment of the announcement.

Indeed, the news thrilled both Utah fans in the immediate Salt Lake City area as well as alumni throughout the Western United States, where the Utes will soon be competing regularly against Pac-10 brand-name foes like Cal (UC Berkeley) and Stanford (more than 6,700 U alumni live in the Bay Area) and USC and UCLA (more than 9,000 alumni live within a 100-mile radius of Los Angeles).

“Having the Utes regularly competing in our area will be a huge boost for alumni participation,” says Bob Livsey BS ’62 JD ’65, a devoted Utah fan and former U of U Alumni Association Bay Area Chapter president. “Athletic events have always been a good draw for our chapter.”

In Arizona, where some 5,500 U of U alumni live within a hundred miles of either Phoenix or Tucson, chapter representatives were equally excited.

“It gives the University immediate name recognition and credibility in the community,” says Denver Chapter President Doug Bruhnke BS’80. “We can imagine it will help recruiting athletes from Arizona and the region. It’s a huge positive all the way around.” 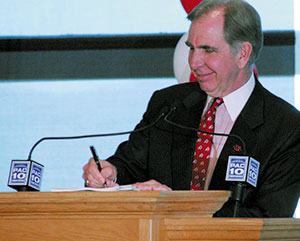 President Young seals the deal with his signature.

A huge positive, yes, but one that took a little doing. For it wasn’t until Pac-10 Commissioner Larry Scott’s long-shot overtures to bring Texas to the existing Pac-10 (and create a dream league that would also include Texas A&M, Texas Tech, Oklahoma, and Oklahoma State) were rebuffed by Texas (which decided to stay in the Big 12) that the door opened up for the Utes.

“There had been long-standing interest in the University [of Utah], particularly since the beginning of June,” said Scott at the press conference announcing the new alliance on June 17, playing down his flirtation with Texas when the Longhorns decided to stay put. “I had authority from the [Pac-10] presidents and chancellors for several scenarios and got approval for this. These conversations have been going on for a few months.”

For Hill, the final few days were hectic, but welcome.

“We spent several hours with [Pac-10 representatives] discussing the details for a contract of agreement,” Hill says of the negotiations. “We talked a lot about the University, how it fits into the Pac-10, future scheduling, and the financial situation.” 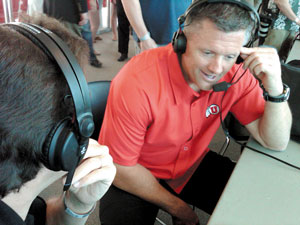 Coach Kyle Whittingham fields questions regarding the U’s move to the Pac-10.

In the end, Young and Hill heard what they wanted—and put the final pieces in motion.

“This is a tremendous thing for the University of Utah,” Young said at the press conference, at Rice-Eccles Stadium. “Looking at this from an athletic perspective… [there is] the opportunity to compete with the great schools of the Pac-10 and the athletic tradition that those schools bring. We also look forward to the academic side of the enterprise. This is a conference of imagination, of innovation. And it now captures all the major innovation centers in the West.”

Though Scott announced that the Utes will begin competing in the Pac-10 (which will be renamed the Pac-12 ; Colorado joined the Pac-10 just days before the Utes) in the 2011-12 academic year, a number of other details were still being worked out over the course of the summer, including how the 12 total schools will be aligned and compete, and how all of Utah’s teams will be impacted.

“There are a lot of things we need to do,” Hill says, citing a new football sports medicine facility, a new soccer stadium, and new outdoor tennis courts among other wish list items for the Utes. “It’s a challenge, but it’s going to be exciting. Challenges are fun.”

The Utes were equally gracious when it came to talking about a departure from their longtime home, the Mountain West Conference, and their longtime rival, BYU.

For his part, Hill says that he had reached out to his counterparts at BYU before any announcement was made and that Utah is committed to continuing the rivalry with the Cougars, even if there is a bump or two along the way.

“We’re trying to see what we can do, but [continuing] the rivalry is going to be harder for everyone,” says Hill. “If we go to nine games in a Pac-10 football schedule, it’s going to take some maneuvering. We know what we’re doing in the long term; it’s mainly a logistical challenge in the short term.”

Beyond that, the Utes were already more focused on the many positives that come with moving to the Pac-10. For example, Utah football coach Kyle Whittingham (who went 10-3 overall and ended up with a 37-27 win over California in the Poinsettia Bowl last season) publicly commented on the surge of interest among recruits for the now-Pac-10 Utes. (Football fans, in particular, were thrilled at the prospect of appearing in the Rose Bowl without having to break the Bowl Championship Series barrier.)

Other U of U coaches were equally as excited, Hill says, although he acknowledges challenges for each.

“Coaches are competitive people by nature,” he observes. “But they have to be realistic about who they are and where we want to be. Our coaches know [competing in the Pac-10] is going to be a challenge, but it’s a challenge we welcome.”

And, when it comes to the bottom line, the Pac-10 is in the process of negotiating a new television contract that will include both Utah and Colorado, a move that media analysts have predicted could be worth as much as $150-$160 million annually for the newly expanded conference (averaging about $13 million per school per year).

But that’s business for another day, says Hill. There are details aplenty (“It’s sunk in,” he said, as the summer moved along). But there were also some times to savor.

“In athletics, and especially at Utah, we need to be dreamers with no limits and no rearview mirror,” Hill said that whirlwind afternoon at Rice-Eccles. “Some of the dreams have exceeded expectations. It’s been pretty special.”