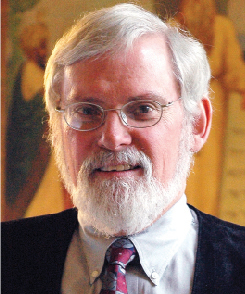 Game On Some 21 students are now enrolled in the first year of a new interdisciplinary graduate program to design and build computer games—with additional students expressing interest in enrolling next year. The three professors who run the Master Games Studio are ecstatic. “The student response has been phenomenal,” says Craig Caldwell, a USTAR Professor […]

Honey, I Shrunk the U Logo! Engineer Etches a Utah Medallion the Width of a Blonde Hair In an example of how a technology wonk displays school spirit, an engineer has created a golden University of Utah logo that is smaller than the width of an average human hair. The gold etching is only 70 […]

Prizewinning Professor Christopher R. Johnson MS’84 PhD’90, Distinguished Professor of computer science, was honored at last May’s Commencement with the Rosenblatt Prize for Excellence, the U’s most prestigious award. The $40,000 gift is presented annually to a faculty member who displays excellence in teaching, research, and administrative efforts. As director of the Scientific Computing and […]

News of the University Tightening Our Belts The 2010 legislative session proved difficult for higher education—but it could’ve been worse. Like most legislative sessions, the 2010 assembly offered a few surprises. Fortunately, there were no bombshells for higher education in general or the University of Utah in particular. But like the rest of the nation, […]

News of the University Together We Reach: An Update on the U’s Capital Campaign Since July 2005, the University has been engaged in a comprehensive capital campaign—“Together We Reach”—to raise funds for scholarships, research, facilities, and many other areas. The goal is to reach $1.2 billion by October 2013, when the campaign will come to […]

News of the University Good Chemistry The U’s chemistry facility will be expanding, thanks to the NIH and private grants An architect’s illustration of the new Department of Chemistry building. Image courtesy Prescott Muir Architects. In June 2009, the Department of Chemistry received a grant of $8 million from the National Institutes of Health (NIH) […]