Honey, I Shrunk the U Logo!

Engineer Etches a Utah Medallion the Width of a Blonde Hair

In an example of how a technology wonk displays school spirit, an engineer has created a golden University of Utah logo that is smaller than the width of an average human hair.

The gold etching is only 70 microns across—that’s 70 millionths of a meter, or less than three one-thousandths of an inch, which is about the diameter of a blonde hair, among the thinnest types of human hair.

The etching was done on a silicon base using a thin beam of electrons from one of two electron microscopes bought by the University in 2008. While the technique of electron-beam lithography is not new, the medallion symbol is more complex than the patterns commonly made.

“People usually do things like lines and rectangles,” says Randy Polson MS’99 PhD’02, a senior optical engineer for the University’s Department of Physics and Astronomy, who made the tiny medallion. “The software that came with the microscope included some stick-figure demos. I thought, ‘Hey, I can do better than a stick figure.’ ”

The medallion is engraved on a chip of silicon two-fifths of an inch square. To the naked eye it is a barely discernible speck. Under a conventional light microscope, it looks like a fuzzy circle. Its full detail is revealed only by a scanning electron microscope—the same device that was used to create it.

In addition to maintaining the microscope, Polson assists University and private researchers who want to use it for a fee. People seek his help with the lithography feature for tasks such as fabricating nanowires and other components for nanoelectronics. The imaging capabilities are used in industries as diverse as pharmaceuticals and metallurgical engineering.

If politicians had to pass an exam before they were allowed to serve in public office, what question would you add to the test?

James Graves, dean, College of Health: How much sin can a politician get away with and still go to heaven? Be specific.

Robert Goldberg, director, Tanner Humanities Center: Have you ever experienced the life of those less privileged than you?

Thanks to modern supercomputing, a University of Utah researcher is at the new frontier of lunar research—using data that’s five decades old.

Michael Thorne, an assistant professor in the Department of Geology & Geophysics, is reexamining ground motion data recorded by four seismometers, placed on the moon during the Apollo missions, that monitored “moonquakes” from 1969 to 1977. That era’s computers suffered information overload whenever researchers tried to extract anything of value from the data. Today, parallel computing, which uses hundreds of computer processors at once, enables data to be mined to previously inaccessible depths.

Thorne, known for software he has written to model earthquake behavior, was tapped by researchers wanting him to do the same for moonquakes. He says NASA has unofficially promised to fund the three-year project, which Thorne kicked off in August.

There is one key difference between the moon and the earth that adds to Thorne’s task. “The earth has a lot of fluid that tends to dampen the ground motion,” he says. “The moon has no fluid, so there’s nothing at all that really dampens this motion. One of the challenges with the lunar data is to figure out how to simulate this same sort of behavior where the energy gets scattered all over.”

The “big picture” questions that Thorne hopes his work will help answer include what the moon’s interior looks like and how the moon was formed. On a more practical level, understanding moonquake behavior is important to those wanting to build lunar bases or install telescopes on the moon’s surface. “We need to know what kind of shaking is going to go on there so we know how to build these things so they don’t fall down,” Thorne says.

Nick Schmerr, a NASA postdoctoral fellow at the Goddard Space Flight Center in Greenbelt, Md., is assisting Thorne with his dataset. “I am interested in expanding our knowledge of how the solar system formed and evolved,” he says. “Dr. Thorne’s modeling efforts will allow us to better understand this process and plan for future missions to the moon, asteroids, Mars, and beyond.”

Thorne’s moon work is already coming back down to earth. He is working on a separate project that applies what he learns to existing earthquake models. 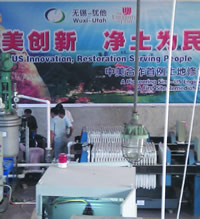 The microbubble project on the shore of Lake Taihu in eastern China.

Microbubble technology developed at the University of Utah has the potential to boost environmental cleanup efforts worldwide, including removing oil and gas byproducts from water, organics and heavy metals from contaminated soil, and harmful algae from lakes. Andy Hong, professor of civil and environmental engineering, developed the new process, called heightened ozonation treatment, or HOT.

A demonstration project on the shore of Lake Taihu in eastern China began in September and was expected to last three months. The focus there is removing heavy metals and other contaminants from an industrial site.

To begin the process, the HOT reactor is placed on the site to be cleaned. In land efforts like the Taihu project, contaminated soil is excavated and placed into the device. Organic contaminants (hydrocarbons) are removed first by repeatedly pressurizing and depressurizing the reactor with ozone gas, creating microbubbles that degrade the hydrocarbons. Metal contaminants then are removed by adding a chelating agent to extract them, then adding lime to precipitate the contaminants so they can be filtered out and then disposed of. “The clean soil will be used for tree planting on public lands, and the water is recycled and reused in subsequent batches of soil cleanup,” Hong says. 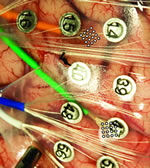 Microelectrodes implanted atop the brain.

In an early step toward letting severely paralyzed individuals speak with their thoughts, University of Utah researchers have translated brain signals into words using two grids of 16 microelectrodes implanted beneath the skull but atop the brain.

“We have been able to decode spoken words using only signals from the brain with a device that has promise for long-term use in paralyzed patients who cannot now speak,” says Bradley Greger, an assistant professor of bioengineering.

Because the method needs much more improvement and involves placing electrodes on the brain, he expects it will be a few years before clinical trials can be conducted on paralyzed people who cannot speak due to so-called “locked-in syndrome.”

People who eventually could benefit from a wireless device that converts thoughts into words “spoken” by a computer include those paralyzed by stroke, ALS (Lou Gehrig’s disease), and trauma, Greger says. People who are now “locked in” often communicate with any movement they can make—blinking an eye or moving a hand slightly—to arduously pick letters or words from a list.

The latest issue of U.S. News & World Report/America’s Best Colleges ranks the University of Utah among the best national universities. The U came in 129th, tying with two other schools. The magazine lists the University as having a student/faculty ratio of 15 to 1—the best in the state—as well as a very high freshman retention rate of 81.2 percent.

The University of Utah’s 2008 Campus Master Plan has been honored by the Society for College and University Planning with the group’s 2010 Excellence in Planning Merit Award for Planning for a District or Campus Component. The master plan was a result of President Michael K. Young’s vision of engagement, preparation, and partnership for the University community. Planners developed underlying principles and created a powerful action program that drew on relationships between campus buildings, infrastructure, transportation, housing, ecology, and spatial requirements.

U of U Secures Grant to Commercialize Clean Energy The U.S. Department of Energy (DOE) recently awarded the University $1.05 million to launch a new Energy Innovation Commercialization Center. The U was one of only five institutions in the country to get a piece of the $5.3 million awarded by the DOE to build and strengthen the nation’s “innovation ecosystems.” Each institution received $1.05 million for projects ranging from business plan competitions to regional networking. The U will use its award to bolster its efforts to commercialize promising clean-energy technologies. The University of Utah’s Technology Commercialization Office (TCO) already supports this effort, but the grant money will substantially increase resources available for driving clean-energy innovations and commercialization for the state and the region.

An artist’s rendering of the expanded UNI.

University Neuropsychiatric Institute to Expand University of Utah Health Care and the School of Medicine’s Department of Psychiatry have begun construction on a new 80-bed, 120,000-square-foot expansion to the University Neuropsychiatric Institute (UNI). Along with the much-needed addition of private inpatient beds, the expansion will greatly increase the capacity for intensive outpatient, aftercare, and substance-abuse services, as well as provide a new home for training and research by relocating the University’s Department of Psychiatry to the facility.

Funding Turns Asia Center into National Resource Center The University of Utah College of Humanities’ Asia Center, in collaboration with the Asian Studies Program at Brigham Young University, has been selected to receive a prestigious Department of Education Title VI National Resource Center Consortium grant of more than $4.5 million over the next four years. The grant will support faculty, students, research, and community outreach activities on both campuses, which are partnering to create the Intermountain Consortium for Asian and Pacific Studies (IMCAPS).

Peter Heilbrun, 73, a leading brain surgeon and former chair of the University of Utah’s Department of Neurosurgery, who is credited with building the department