University of Utah Featured in The Chronicle of Higher Education 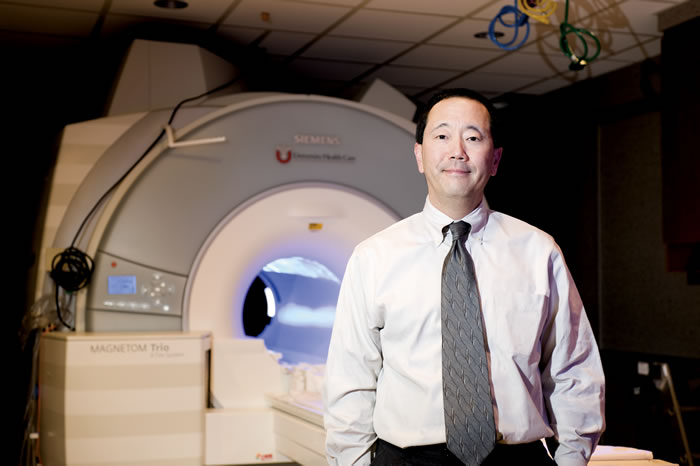 Doug Kondo, M.D., a clinical assistant professor of psychiatry, left Duke University to come to the U in 2007 and is a part of the USTAR initiative.

Recently, The Chronicle of Higher Education has taken notice of the U’s ability to attract talented researchers.

A May 1 story, “Utah Lures Research Stars With Money and Support” (visit here for the full story) notes that the Utah Science Technology and Research initiative (USTAR), launched in conjunction with the state of Utah and Utah State University in 2006, has been responsible for attracting (or “poaching”) some 30 researchers from other institutions in the past five years. These faculty members are offered generous start-up packages to further their research, and access to business professionals who can help shepherd research innovations to the marketplace. The Chronicle notes that USTAR’s success, in part, hinges on the program’s long-term vision, which is “based on a business plan that calls for continued and increasing state spending on new faculty hires for 30 years, a time span that runs longer than most political careers and just about any university presidency.”

Although the U has demonstrated a marked ability to transform federal and state dollars into successful research projects, another Chronicle story (“The Research Drain,” May 8, available here) points out that while many institutions—including the University of Utah—have increased their own spending on research in the past decade, their federal rankings according to the National Science Foundation over that period have slipped. 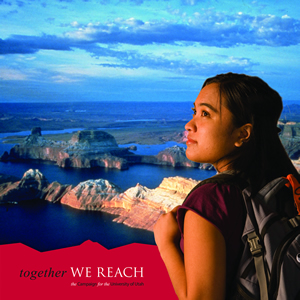 The University of Utah has been engaged in a vigorous capital campaign—dubbed “Together We Reach: The Campaign for the University of Utah”—since 2005. Thanks to the overwhelming generosity of many U of U alumni and friends during the last six years, the campaign has been extraordinarily successful and is edging closer to its $1.2 billion goal, with two years remaining.

The campaign comes at an important crossroads for the U, highlighted by an aggressive building boom on campus, a Nobel Prize in Physiology and Medicine, record student enrollment, multiple football bowl appearances, entry into the Pac-12, and national awards in technology transfer and start-ups, among many academic, research, and other accomplishments.

And it’s not just the dollars raised that are cause for celebration, but also the energetic participation of new donors who have given since the start of the campaign. Since the campaign began, 51,929 new donors have made gifts to the U.

Congratulations to Distinguished Professor of Mathematics Christopher Hacon, who was awarded Italy’s prestigious Antonio Feltrinelli Prize for Mathematics, Mechanics and Applications. The award will be presented at the Accademia Nazionale dei Lincei, or National Lincean Academy, in November. The Antonio Feltrinelli Prizes are considered Italy’s highest scientific and cultural honors.

Kudos to biology assistant professor Çağan Hakkı Şekercioğlu, who was named one of National Geographic’s Emerging Explorers for 2011. The award “recognizes and supports uniquely gifted and inspiring adventurers, scientists, and storytellers making a significant contribution to world knowledge through exploration while still early in their careers.” Şekercioğlu is noted for his work studying the causes and consequences of vanishing bird populations.

And finally, a tip of the hat to Distinguished Professor of Mechanical Engineering K.L. “Larry” DeVries BS’59 PhD’62, who recently marked 50 years of teaching at the University. 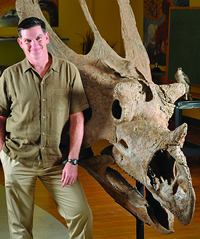 Scott Sampson with Utahceratops, a dinosaur he discovered in Grand Staircase-Escalante National Monument.

Who: Scott D. Sampson, Research Curator for the Natural History Museum of Utah and host of the PBS program Dinosaur Train

With the rise of global homogenization and a steep decline in time spent outdoors over the past few decades, are we as humans losing our love of place? If so, how does this loss affect our chance—and even desire—to conserve and protect the world’s natural resources? Scott D. Sampson, research curator at the Natural History Museum of Utah and adjunct professor of geology and geophysics at the U, will address how we might broker a new human-nature relationship in this globally interconnected digital age. The lecture is free and open to the public. To RSVP, call (801) 585-0911, or visit their Web site here.

An academic physician-scientist and administrator from New York University, Vivian S. Lee, has been hired as the University of Utah’s new senior vice president for health sciences. In addition, Lee is also serving as dean of the School of Medicine and chief executive officer of University of Utah Health Care. A prolific researcher and radiologist, she has served as the vice dean for science and chief scientific officer at NYU Langone, among a number of other important leadership positions. Lee succeeds the retiring Lorris Betz, who is currently serving as interim University president.

Eric Denna is the University’s new chief information officer. Denna is a leader in computing and information technology, with extensive experience in higher education and business. He served as CIO for the Times Mirror Higher Education Group in Chicago; CIO for Brigham Young University; and the managing director for The Church of Jesus Christ of Latter-day Saints. He also has served as adviser to several other universities and more than a dozen private corporations. Denna replaces Steve Hess, who retired after more than 35 years as a teacher and administrator at the U of U.

Clark Ivory BA’88 has been elected chair of the University of Utah’s Board of Trustees. Ivory is CEO of Ivory Homes, one of the largest homebuilders in Utah. He succeeds Randy Dryer BS’73 JD’76, who was the longest-serving member in board history (17 years of noncongruent service, beginning in the 1970s as student body president). Utah Gov. Gary Herbert also appointed Michele Mattsson HBA’85 JD’88 and David Huntsman ex’92 to the board. At press time, there remained one position to fill to replace Dryer. The University’s Board of Trustees is composed of 10 members, and is charged with the responsibility of providing stewardship and guidance to the University administration.

William Warren has joined the University of Utah as its first chief marketing and communications officer. The new cabinet-level position is responsible for marketing as well as public and community relations for the institution. Warren will also serve as the publisher of Continuum. Prior to coming to the U, Warren served as vice president of communications at CA Technologies, one of the largest independent software corporations in the world. Previously, he was vice president of marketing communications for the Coca-Cola Company and served in senior communications roles at MCI, ARCO, PricewaterhouseCoopers, and as chief speechwriter to then New York Mayor Rudolph Giuliani. Warren has worked as a consultant on political campaigns and published articles in The New York Times on national education issues.

Martha Bradley BFA’74 PhD’87, previously dean of the U’s Honors College, has been appointed associate vice president for academic affairs and dean of undergraduate studies. Bradley is a historian who specializes in the history of Utah, as well as gender and community studies. She is past president of the Mormon History Association and has been honored for her teaching with the University of Utah Distinguished Teaching Award. She succeeds John Francis, who is stepping down after serving in the position for 16 years.

Sabine C. Klahr Selected to be Director of the International Center

James E. Gardner Appointed Director for the U of U’s School of Music

James E. Gardner has been selected as the new director for the School of Music. His administrative background includes roles as associate director of the Moores School of Music at the University of Houston and chair of the Department of Music at George Mason University in Virginia, where he was also director of graduate studies. Gardner has also served as concertmaster for the Wilmington Symphony in North Carolina, performed with several other symphony orchestras, and taught music history.

Peter Armentrout, Distinguished Professor of chemistry and Cannon Fellow at the U, was awarded the Rosenblatt Prize for Excellence, the University’s most prestigious award. The $40,000 gift is presented annually to a faculty member who displays excellence in teaching, research, and administrative efforts. One of the world’s foremost researchers and leaders in physical chemistry, Armentrout is noted for his rigor in studying the mechanisms by which chemicals bond. He is also lauded for championing diversity in the sciences and helping to launch the careers of a number of high-profile female scientists. In 2009, his research garnered him the highest honor in his field, the American Chemical Society’s Field and Franklin Award for Outstanding Achievements in Mass Spectrometry.

Rob Butters BS’96 MSW’00 PhD’10 has been selected as the Utah Criminal Justice Center’s new director. As a licensed clinical social worker, Butters has more than 20 years of experience working with children, adolescents, and families involved in the court system. He is currently an assistant professor and chair of forensic social work at the U’s College of Social Work. Established in 2006, the Utah Criminal Justice Center is a collaborative partnership between the University and the Utah Commission on Criminal and Juvenile Justice that supports interdisciplinary research, teaching, and training.

Construction on New Arts and Education Complex Under Way

The U broke ground on the Beverley Taylor Sorenson Arts & Education Complex on June 14. The estimated $24 million complex will be located at the southern entrance of the campus, adjacent to Milton Bennion Hall and east of the David Eccles School of Business. A principal goal of the center is to research and facilitate teaching methods for integrating arts education into traditional core subjects such as math, science, history, and language arts in K-12 schools. The groundbreaking comes three years after the Sorenson Legacy Foundation provided the lead donation of $12 million. The interdisciplinary arts and education complex is named for Beverley Taylor Sorenson, a lifelong advocate for arts education. The complex will house a newly created national Center for Integrated Arts into Academic Learning, guided jointly by the U’s colleges of Education and Fine Arts.

For more on this and other memoria, click here.