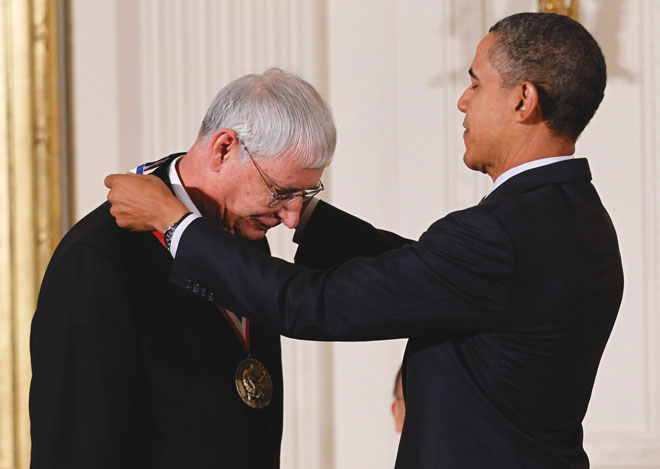 President Barack Obama presents the National Medal of Science to University of Utah chemist Peter J. Stang on October 21, during a ceremony at the White House. / AP Photo/Pablo Martinez Monsivais

University of Utah organic chemist Peter J. Stang has won a National Medal of Science–the highest U.S. honor for a scientist or engineer–and was honored by President Barack Obama during a ceremony at the White House on October 21.

“I am very humbled, honored, and pleased,” says Stang, a Distinguished Professor of chemistry and former dean of the University of Utah College of Science. “To date, I have had approximately 100 postdoctoral students and Ph.D. students whom I mentored, and this recognizes their work, too.”

Stang was among seven scientists honored with the Medal of Science and five inventors honored with a National Medal in Technology and Innovation. He was cited by the White House “for his creative contributions to the development of organic supramolecular chemistry and for his outstanding and unique record of public service.”

Stang has pioneered new methods in a field called supramolecular chemistry for the self-assembly of molecules–large molecules that mimic nature and build themselves from a mixture of pre-designed chemical building blocks.

“It’s like a Lego set with individual building units,” Stang says. “You can make complicated structures and systems.”

These molecules, created through what chemists call rational design, have many uses, from new drug-delivery vehicles against cancer to substances with promise as modern catalysts to speed chemical reactions in petroleum refining.

Stang received his undergraduate degree from DePaul University in 1963 and his doctorate from the University of California, Berkeley, in 1966. He joined the University of Utah faculty in 1969 and became Distinguished Professor in 1992. He chaired the Department of Chemistry from 1989 to 1995, and served as dean of the College of Science from 1997 to 2007.

Watch a video of Peter Stang accepting the National Medal of Science at the White House,

U Community Weighs In On Presidential Search 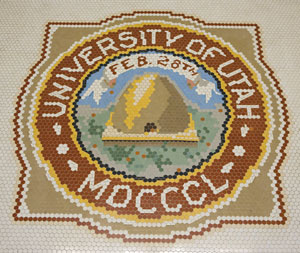 Meetings with University of Utah constituent groups were held in late summer and early fall to help define the criteria most important to consider in selecting the next University president. Search committee members (20 total) spoke with faculty, staff, students, alumni, and business-community representatives in meetings from Salt Lake City to St. George (where the U has a satellite campus for certain advanced programs).

Many people who attended the meetings talked about the need for a leader who is a good communicator. Keven Rowe BS’83 JD’86, president of the U’s Alumni Association and a search committee member, said during a meeting with alumni, “They want someone who can have a strong academic and community presence, someone who can reach out to the Legislature and the community and still be an academic leader.”

Dinesh Patel, chair of the USTAR Governing Authority and also a search committee member, told the alumni the U community’s expectations are high. “They want a superhuman,” he said. “Someone has to be academically stellar,” he added. “For me, personally, it’s an out-of-the-box thinker.”

A recurring theme was the importance of a new president’s ability to woo legislators without sacrificing the U’s integrity. Many urged the committee to select a president capable of communicating the University’s academic and economic impact while ensuring that the Legislature contributes appropriate funding for the U.

Numerous comments from the community suggested the new president should favor allowing guns on campus—and not surprisingly, a raft of comments recommended the opposite.

Comments from faculty and students in the Academic Senate ranged from wanting someone who would strongly support the U’s commitment to becoming carbon neutral by 2050 to seeking a fearless champion of the importance of the humanities in a university education. One faculty member stated, “The new president should be a ‘renaissance’ person in spirit who values all sides of the academic world—teaching and research, sciences and humanities; a diplomat who is firm in dealing with legislators.”

Finalists for the position are expected to be identified in early 2012.

New Life For an Old Building 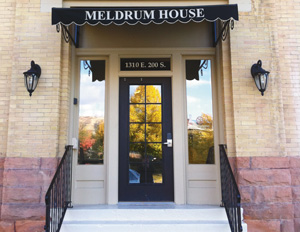 Meldrum House, on the southeast corner of 1300 East and 200 South in Salt Lake City, will house actors and other artists visiting the University of Utah.

The historic but run-down building on the southeast corner of 1300 East and 200 South in Salt Lake City has been transformed during the past year from a neglected boarding house to “Meldrum House,” an attractive apartment building that visiting artists to the University of Utah campus will call home. Pioneer Theatre Company (PTC) and Cowboy Partners, which did the renovation work, purchased the building and spent the past year gutting the inside to create compact apartments from the original common-area spaces. Cowboy Partners retains ownership of the ground floor and will lease it as restaurant space. PTC owns the upper floors and has created one-bedroom living spaces for the professional actors, directors, designers, and musicians who come to Salt Lake City to participate in performances on campus. The rooms have high ceilings and big windows, and all have stovetops, refrigerators, and their own heating and air conditioning systems. The second floor has a laundry room and a gathering space for meetings and social events. During the academic year, the apartments will be used 80 percent of the time by PTC, with the remaining 20 percent for use by other campus entities. During the summer, that proportion will reverse.

Support Center Aims to Help Veterans at the U 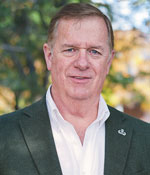 The University of Utah recently established a Veterans Support Center to help veterans transition into the sometimes unnerving world of civilian life. The center, located on the first floor of the Olpin Union Building, is under the direction of Roger L. Perkins.

Perkins notes that the center is set up to help with the myriad needs of any student navigating a large university system for the first time, in addition to the specific needs that may arise in the veteran population. “The center and our staff can help with anything from finding a tutor for that pesky organic chemistry class to helping find part-time employment, to arranging counseling for post-traumatic stress disorder,” Perkins says.

The center’s team is also working to help veterans with their educational benefits. Perkins and the staff advise students about how to apply for veterans benefits and where to go on campus for various services. They also act as advocates for student veterans should the need arise.

The Veterans Support Center falls under the auspices of Student Affairs at the University. Associate Vice President for Student Development Kari Ellingson says that the office’s creation was spurred by newly collected data on student veterans’ issues, coupled with establishing the National Center for Veterans Studies on campus and support from the Office of Budget and Planning.

David Rudd, dean of the College of Social and Behavioral Science and co-director of the veterans-studies center, explains there is a great need to provide support for this portion of the population at large. “After 10 years of war in Iraq and Afghanistan, large numbers of veterans will be making their way to college and university campuses around the country. In addition to navigating a somewhat complex Veterans Affairs benefit process, a student veteran service center will allow us to target additional needs across the full academic and social spectrum.”

The center’s opening comes at a critical time for U.S. veterans. A recent study by Rudd indicates that up to half of student veterans have contemplated suicide. Rudd’s study garnered national press coverage, including an article in The Chronicle of Higher Education (available at http://chronicle.com/article/Half-of-Student-Veterans-Have/128524).

The University of Utah has selected Bryan Ritchie to be the next director of the Technology Commercialization Office. The office manages the University’s intellectual property, which includes collecting invention disclosures, filing patents, licensing technologies, and fostering startup companies. Ritchie joins the U from James Madison College, a residential college that is part of Michigan State University, where he served as a professor of political economy with a focus on international relations. He also was director of the Michigan State Entrepreneur Network and co-director of the Michigan Center for Innovation and Economic Prosperity. He holds a doctorate in political economy from Emory University, a master of business administration from Brigham Young University, and a bachelor’s degree from the University of Nevada at Las Vegas.

Former University political scientist and head of the Middle East Center Bahman Bakhtiari was fired from the U in late June. Bakhtiari had been accused of failing to correctly cite passages used in materials submitted to the U when he applied for a tenured position, as well as plagiarizing other published materials. A faculty panel recommended suspension and a public reprimand, but that decision was overruled by Lorris Betz, the University’s interim president, who noted in his decision, “The only appropriate sanction in this case is dismissal, which is necessary to preserve the academic integrity of the institution and to restore public confidence in the University.” Bakhtiari responded by filing suit against Professor Peter Sluglett, the Middle East Center’s former director. The lawsuit alleges that senior faculty in the program—including Sluglett—conducted a smear campaign against Bakhtiari that resulted in his dismissal from the U. The case is pending in Third District Court.

Thanks to a grant from the Lawrence T. and Janet T. Dee Foundation, the J. Willard Marriott Library will be digitizing issues of The Daily Utah Chronicle from 1940 to 1994, making them freely accessible via the Web. The library’s Utah Digital Newspapers program is recognized as one of the leaders in newspaper digitization in the United States. Digitizing the Chronicle issues will make the history contained within them more accessible to students, faculty, staff, alumni, and other researchers. Visit http://digitalnewspapers.org to view the Utah Digital Newspapers archive. 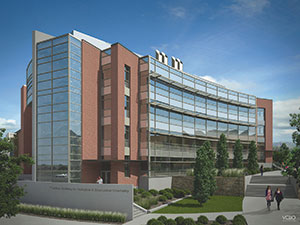 An artist’s rendering shows the Thatcher Building for Biological and Biophysical Chemistry.

Ground breaking for the new $22 million Thatcher Building for Biological and Biophysical Chemistry was held September 22. Located adjacent to the southwest corner of the Henry Eyring Chemistry Building, the five-story, 41,000-square-foot structure will provide space for a complex of mass spectrometers to analyze chemicals, one floor for advanced undergraduate teaching laboratories, organic and biochemical synthesis labs, world-class imaging and spectroscopy equipment, and a new campus home for theoretical chemistry. The building is scheduled to open by spring 2013. The facility is named in honor of the Lawrence E. and Helen F. Thatcher family of Salt Lake City in recognition of their support in providing a lead gift to the project. The National Institutes of Health contributed $8 million toward the building’s construction.

In September, the Genetic Science Learning Center in the Department of Human Genetics was awarded $1.33 million by the National Institutes of Health to create a neuroscience curriculum for middle and high school students designed for fast-growing classroom technologies such as interactive white boards and touch pads (e.g., the iPad and Xoom). The Neuroscience of Our Senses will employ multimedia
and touch interface to engage students in the anatomy, physiology, and function of the five senses. The lessons will incorporate research being conducted at the U’s Brain Institute, conveying the subject’s immediacy and relevance to human health. To be completed in 2016, the project will be presented in workshops to 850 secondary school teachers nationwide and will be available to the public as freely downloadable apps.

Esther Fujimoto ex’91, 49, a University of Utah scientist who was on a team that helped discover a breast cancer gene