Michael K. Young Named President of the University of Washington 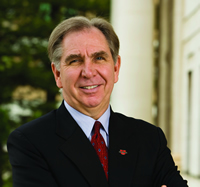 “It has been an honor and a privilege to serve this great university,” said Young after the announcement. “The University is on a remarkable trajectory, and I am certain that it will continue to grow in service, stature, and accomplishments. I acknowledge with the utmost humility and respect the support I received throughout my administration from the U’s extraordinary leadership team and faculty, as well as the unstinting commitment of our alumni and friends.”

According to Randy L. Dryer BS’73 JD’76, chair of the University of Utah Board of Trustees, “The University of Utah has truly flourished under President Young’s leadership. His vision and courage are reflected in the remarkable accomplishments of the past seven years.”

During Young’s tenure, the number of spin-off companies from U of U research has grown dramatically, and private giving to the U has increased from $130 million annually to more than $165 million. Most recently, the U has joined the national stage as the newest member of the Pac-12 athletic conference.

Lorris Betz, senior vice president for Health Sciences, executive dean of the School of Medicine, and CEO of the University of Utah Health System, has been appointed interim president of the University. Betz joined the U in 1999 and previously served as interim president in 2003-04. Commissioner of Higher Education William A. Sederburg notes, “Dr. Betz has clearly demonstrated his ability to step in and lead the U while we concentrate our efforts on finding a replacement for Mike Young.”

Regent Nolan Karras, former speaker of the Utah House of Representatives, is leading the search for Young’s replacement, which is expected to be complete within a year.

Since the U.S. economic downturn began some three years ago, budgets for higher education have been slashed at institutions across the country. In 2009-10, the U’s budget was cut a whopping 17 percent. But a brightening financial picture for 2012 could mean that the worst of the financial belt-tightening is behind us. Although higher education was initially warned to prepare for a 7 percent budget cut, the decrease was ultimately reduced to 2 percent, thanks to the efforts of President Michael K. Young and many University advocates.

The impact of those cuts will vary across campus. Yet the combined effect of the legislative cuts, enrollment increases, and tuition increases will mean that 2011-12 budgets will differ only slightly from those of 2010-11 for most areas.

The State Board of Regents approved a 5 percent increase in tier one tuition for all Utah System of Higher Education institutions. Combined with a requested 2.8 percent tier-two increase, the cost of attending the University will grow by 7.8 percent in 2011-12. Revenue from the tier-one increase will be used primarily to cover the rise in health insurance premiums for U of U employees and to provide some funds for selective salary upgrades. Revenue from the tier-two increase will be used to address a variety of needs in academic, service, and administrative areas. Tuition increases ranged from 5 to12 percent in schools throughout the state.

No funding was appropriated for overall increases in staff compensation, either for salaries or benefits. Moreover, the cost of health insurance premiums will go up significantly next year. The increase, 18 percent, will be borne proportionately by employees and the University.

Although the University was denied a request of $50 million to address serious infrastructure concerns, a one-time funding grant of $1.3 million was approved for the Huntsman Cancer Institute expansion, as well as $85,000 to KUER for the station’s upcoming translator move.

In April, Utah philanthropists Jon and Karen Huntsman gave $41 million to the Huntsman Cancer Institute (HCI) for cancer research. The Huntsman family has generously given more than $300 million to HCI since its founding in 1995. HCI is a National Cancer Institute-designated cancer center, which means that it meets the highest national standards for cancer care and research, and receives federal support for its scientific endeavors.

Linda Wells has joined the David Eccles School of Business leadership team. She serves in the dual role of director of the full-time MBA program and of the Sorenson Center for Discovery and Innovation. Wells served more than 10 years as executive director of the Stanford Graduate Business School’s Center for Entrepreneurial Studies, a program that provides opportunities for students, faculty, and practitioners to collaborate in supporting the development of hands-on entrepreneurship-related education courses. Under her leadership, the center developed from infancy to its current stature as a mature, highly respected program.

Amy J. Wildermuth, a professor in the S.J. Quinney College of Law, has been appointed associate vice president for faculty. She succeeds Susan Olson, who stepped down in the spring. Wildermuth has degrees in engineering, law, and the humanities—and experience as a law professor and practicing lawyer. The position of  associate VP calls for someone who can interpret University policies such as those governing retention, promotion, and tenure; sabbaticals and leaves; and auxiliary faculty reviews. The  associate VP represents the administration on the Academic Senate Executive Committee and also facilitates resolutions when parties disagree. At the U, Wildermuth teaches and writes on civil procedure, as well as administrative, environmental, and property law. She also is involved with the college’s Wallace Stegner Center and is a member of the executive committee for the new Global Change and Ecosystem Center.

An artist's rendering of the new Honors housing

The groundbreaking for the Donna Garff Marriott Honors Residential Scholars Community was held on March 30. The first phase of the 161,000-square-foot structure—to be located at the corner of Mario Capecchi and South Campus drives—will provide apartment-style living for 310 students and resident advisors, a common gathering space, and meeting areas. The centerpiece of the building’s design is based on the honors “hallmark philosophy of engaged learning,” which promotes education outside of the traditional classroom and encourages students to work alongside faculty scholars, with community partners, and even to design their own research projects to affect society as a whole. The current phase of construction is expected to be completed in June 2012. Eventually, the residence will hold 1,800 beds.

Bike Repair Stands Installed on Campus to Encourage Bike Use

As part of its ongoing effort to encourage green transportation, the University’s Commuter Services has installed two bicycle repair stands on campus, located by the bicycle collective in the business loop and at the southwest corner of the Olpin Student Union. These repair stations are the first of their kind on campus, and other locations are being studied for additional stands, which provide tools for the maintenance of bicycles, including air pumps and other basic equipment. For the past few years, Commuter Services has promoted cycling to campus as a convenient, healthy, and “green” alternative to driving.

Stephen Goldsmith, an associate professor in the College of Architecture + Planning’s Department of City & Metropolitan Planning, teaches a broad range of students including those in the Honors College. He also serves as chair of the Environmental Science curriculum in the Professional Master’s of Science and Technology program and was recently named the University Professor for Campus Sustainability in the U’s Graduate School of City & Metropolitan Planning.

What do you enjoy most about teaching?

Working with students who are engaged in finding ways to repair and transform our places is among the most meaningful work I’ve ever done. I just returned from Mobridge, South Dakota, where several of my students presented a plan [for a 30-acre site where Main Street meets the Missouri River, right across from Sitting Bull’s gravesite] to the town’s officials and citizens. It was received with great enthusiasm, and the mayor hopes to begin implementation this summer. To see students actively, creatively engaged in community change as part of their studies is an extraordinary gift, one that keeps me hopeful for the future.

My interest grew out of my work creating affordable housing and workspace for artists in downtown Salt Lake City [running the nonprofit Artspace]. The complexities of zoning got in the way of what is now a widely accepted practice of creating mixed-use residential areas in our city, but it was our early pioneering projects near Pioneer Park that set the stage and changed the city’s zoning ordinances. Through this work and my work as an environmental artist, including daylighting creeks [bringing underground creeks back to the surface]—acts of “restorative urbanism,” we now call them—my interest in planning merged with hands-on project development.

What’s the best advice you ever received?

An uncle once told me, ‘There’s more than one way to skin a cat.’ Whenever I’ve had to overcome an obstacle to get something accomplished—designing a tool to do the right job, finding an alternative material to build something I need in the middle of the night, or inventing a new zoning ordinance—that advice meows in my head. Similarly, the Buddhist phrase ‘Walk on’ and Rilke’s advice to ‘Live the questions’ have done extra duty in my life.

The University of Utah recently celebrated the 5,000th invention developed on the U of U campus since it started keeping records in 1965. Engineering Dean Richard Brown filed invention disclosure No. 5,000 (for a “smart food tray” that would help diabetic patients monitor their carbohydrate intake) some 45 years after former dean Wayne Brown (no relation) filed the first, for a “continuous electroplating process and apparatus” used to purify metals. “The University of Utah is very efficient at commercializing its technology,” says Richard Brown, who has served as dean since 2004. Brown developed the food tray in collaboration with Intermountain Healthcare endocrinologist Joel Ehrenkranz. It measures carbohydrate, fat, protein, and calorie consumption in real time, and could also be used to help track calories for dieters, sodium and cholesterol for those with heart problems, or potassium for people with kidney failure. An initial trial is now being planned.

Congratulations to student Brandon Peart, who has been named a Truman Scholar, becoming the fifth U student in as many years to receive the award. The prestigious scholarship provides $30,000 for graduate study as well as priority admission and supplemental financial aid at some premier graduate institutions, career and graduate school counseling, leadership training, and special fellowship opportunities within the federal government.

Hays Gorey BA’42, 89, a noted journalist, U of U Distinguished Alumnus honoree, and former member of the U’s National Advisory Council

Anne Riordan BS’56, 76, a dance instructor and professor emerita at the U who pioneered dance and creative movement for individuals with physical and mental disabilities