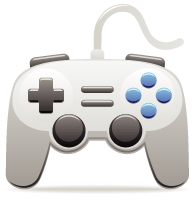 Some 21 students are now enrolled in the first year of a new interdisciplinary graduate program to design and build computer games—with additional students expressing interest in enrolling next year.

The three professors who run the Master Games Studio are ecstatic. “The student response has been phenomenal,” says Craig Caldwell, a USTAR Professor in the College of Fine Arts who teaches the creative side of the program. In addition to Caldwell, Mark Van Langeveld PhD’09 from the College of Engineering covers programming technology, and Roger Altizer MS’06, an associate instructor in the College of Fine Arts, gives guidance on process, outlining the steps that go into designing and building computer games. Together, the three teachers help students learn not only the technical aspects of game design, but also how to work together as a team and see a project through to completion.

“Digital media—whether it be games, visual effects, or animation—is directly tied to a narrative that must be integrated into the experience,” says Caldwell. “We work with students to come up with solutions to get their ideas linked together and out the door.”

Although most major universities now offer computer games programs, the U of U has the added bonus of having major game studios—Disney and EA (Electronic Arts)—located in Salt Lake City. Industry professionals from these companies have taken an active interest in the program. They regularly present guest lectures and, in January, several judged the selection of games concepts the students will work on next year. “The Master Games Studio was created not only to support the students,” says Caldwell, “but also to support the video game companies in town as we all work to expand employment opportunities in Utah.” 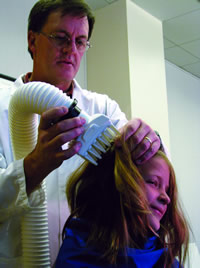 Prof. Clayton demonstrates the LouseBuster's use.

Four years after the LouseBuster prototype made headlines when research showed that the chemical-free, warm-air device wiped out head lice on children, a new study reveals that a revamped, government-cleared model is much more effective.

“For a louse, it’s like sticking your head out a window at 100 miles an hour; they’re going to get dried out,” says University Professor of Biology Dale Clayton, senior author of the study and a founder of Larada Sciences, a University spinoff company that sells or leases the LouseBuster to schools, camps, medical clinics, and delousing businesses.

The new study of 56 louse-infested children and adults found 94.8 percent of lice and their eggs, known as nits, were dead after treatment with the LouseBuster.

The original LouseBuster prototype proved effective in a study published in November 2006 in the journal Pediatrics. But it was noisy, wouldn’t plug into home electrical outlets, and got tangled in curly hair. After the first study, thousands of people with louse-infested children contacted Clayton and the University of Utah seeking the device, even though it was only a research prototype and was meant for eventual use by school nurses and other delousing professionals, not private individuals. It took three more years for the revamped LouseBuster to hit the market after gaining U.S. Food and Drug Administration clearance as a medical device. It was patented in September 2010.

Just seven months after University of Utah geneticists took part in a landmark study that sequenced for the first time the genome of an entire Utah family, U of U researchers have taken part in another historic study that is the first large-scale genome sequencing project—sequencing the whole genome of 179 people and the protein-coding genes of 697 others.

The study demonstrates how quickly the science of genome sequencing is expanding—first from individuals, then to families, and now to large groups of people representing distinct geographic and ethnic populations (so far, those with ancestral origins on three continents). 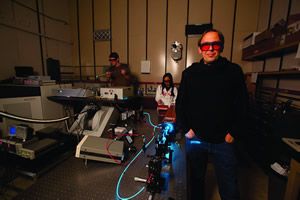 University of Utah physicists stored information for 112 seconds in what may become the world’s tiniest computer memory: magnetic “spins” in the centers, or nuclei, of atoms. Then the physicists retrieved and read the data electronically—a big step toward using the new kind of memory for both faster conventional and superfast “quantum” computers.

“The length of spin memory we observed is more than adequate to create memories for computers,” says Christoph Boehme, an associate professor of physics and senior author of the new study. “It’s a completely new way of storing and reading information.”

However, some big technical hurdles remain: The nuclear spin storage-and-read-out apparatus works only at 3.2 degrees Kelvin, or slightly above absolute zero—the temperature at which atoms almost freeze to a standstill—and can jiggle only a little bit. And the apparatus must be surrounded by powerful magnetic fields roughly 200,000 times stronger than Earth’s.

“Yes, you could immediately build a memory chip this way, but do you want a computer that has to be operated at 454 degrees below zero Fahrenheit and in a big national magnetic laboratory environment?” Boehme asks. “First we want to learn how to do it at higher temperatures, which are more practical for a device, and without these strong magnetic fields to align the spins.”

As for obtaining an electrical readout of data held within atomic nuclei, “nobody has done this before,” he adds.

Quantum computers—a yet-unrealized goal—would run on the odd principles of quantum mechanics, in which the smallest particles of light and matter can be in different places at the same time. That means quantum computers theoretically could be billions of times faster than conventional computers.

Jason Perry JD’99, formerly Utah Gov. Gary Herbert’s chief of staff, is the U’s new vice president for government relations. A graduate of the S.J. Quinney College of Law, Perry will be responsible for managing the U’s state and federal relations. He previously served as executive director of the Governor’s Office of Economic Development, as well as deputy director of the Utah Department of Commerce, an assistant Utah attorney general, and a special assistant United States attorney. 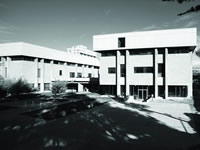 The federal government has given a big boost to the University of Utah’s College of Architecture + Planning as it prepares to renovate its 1970 building into a net zero energy facility—a building that, through renewable power-generating systems located onsite, generates as much energy as it consumes. The Department of Energy (DOE) has selected the project to participate in its highly competitive Commercial Building Partnership program, which seeks to improve the energy efficiency of buildings across the United States. The partnership recognizes the college’s renovation as one of the most significant of its kind, designating it an “exemplary retrofit” that will serve as a model for aging institutional facilities across the country. The DOE will provide the resources of its national laboratories as well as private sector technical experts for a period of up to three years, all at no cost to the U—an estimated value of at least $1 million.

The University of Utah College of Humanities’ Asia Center, in collaboration with the Asian Studies Program at Brigham Young University, has been selected to receive a prestigious Department of Education Title VI National Resource Center Consortium grant of more than $4.5 million over the next four years. The grant will support faculty, students, research, and community outreach activities on both campuses, which are partnering to create the Intermountain Consortium for Asian and Pacific Studies (IMCAPS).

Matthew Van Alstine Makomenaw has joined the Office for Equity and Diversity as the new director of the American Indian Resource Center (AIRC). Makomenaw, a member of the Odawa tribe, from the Grand Traverse Bay Band of Ottawa and Chippewa Indians and Little Traverse Bay of Odawa Indians, has extensive experience working with American Indian students in higher education. He was the director of Native American Programs at Central Michigan University, an adjunct faculty member at the Saginaw Chippewa Tribal College, and served on the Board of Regents for the Saginaw Chippewa Tribal College. The AIRC supports American Indian students in an academically competitive environment as they strive to reach their full potential.

Cathy Anderson has been hired as associate vice president for Budget and Planning. She will replace Paul Brinkman, who is retiring in June, and will assume oversight of two campus offices: budget and institutional analysis. Anderson will interact with deans and directors of academic units and play a central role in the setting of tuition and fees; student financial aid budgets; the management of various discretionary funds; and the supervision of selected student, faculty, and financial data elements. She will also be responsible for reporting budgetary figures to state and federal agencies. Since May 2003, Anderson has held the position of associate dean of finance for the University’s School of Medicine.

Mitch Albom, author of Tuesdays with Morrie and The Five People You Meet in Heaven, will deliver the University’s general commencement address in May. Albom received his bachelor’s degree in sociology at Brandeis University and holds master’s degrees in journalism and business administration from Columbia University in New York City. In addition to publishing books and appearing at speaking engagements, Albom provides regular commentary on ESPN television and radio. A Detroit Free Press columnist, he was named best sports columnist in the nation a record 13 times by the Associated Press Sports Editors.

August L. Jung MD’61, 75, U of U professor of pediatrics, and founder and first director of the Newborn Intensive Care Unit at the U of U Hospital