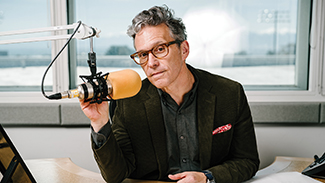 Others may disagree, but I consider Mr. Fabrizio to be one of the best interviewers anywhere. (“Still Riding the Waves,” Summer 2017). He is always superbly prepared—reads the books from cover to cover—and I’ve heard him complimented by his subjects more than once on his excellent preparation. As an interviewer, he is on par with the ever-excellent Terry Gross, and I like his style much better than Charlie Rose (whom my dad idolized)….

Doug’s show grabs my interest virtually every episode. Incredibly prepared and willing to ask difficult questions without being offensive. His interviews bring out the thoughts and questions that come up in my mind. I listen to his podcast every night as I go to sleep and finish on my way to work in the morning, re-listening to older shows when I run out of fresh.

I love listening to RadioWest! The interviews are so interesting, and as Doug interviews, I’m captivated, and often, Doug asks the very questions that I myself am curious about. This program is my most favorite of all of the programs. And yes, I’m a podcast listener as well. Doug is a jewel here in SLC!

I would say that Doug Fabrizio’s low point in his broadcasting career was his September 5, 2006, interview of Dr. Steven Jones of BYU, which was supposed to go over the physical evidence Jones was uncovering that called into question the official story of the collapse of the three WTC buildings on 9/11 (Bldgs 1, 2 and 7). Instead the interview turned into a process of entrapment trying to implicate Jones in a “conspiracy theory” as to who did it. This lasted 20 minutes and was followed for the rest of the hour by an even more egregious interview featuring two professors….

We don’t have to spin antiquity into political climate change (“The Cave that Holds a Million Bones,” Summer 2017), because the climate changes almost every day and has been changing since the beginning of time. If we’d keep to the facts in academia and media, the world would be a better place.

This is great! (“A Long Line of Alumnae,” Summer 2017). My son is starting at the U this fall, and when he graduates, he will also be a fifth-generation alum. Love it!

*Comments made in response to articles online at continuum.utah.edu. Visit articles to read more.