Life at the University of Utah in 1898 was in transition. Students overflowed the classroom buildings that served as campus near 200 West and North Temple, President James Talmage had just resigned, and Joseph T. Kingsbury had been newly appointed as president. Just four years earlier, Congress had granted 60 acres of undeveloped land from the Fort Douglas Military Reservation to the university for its new—and permanent—campus. Leaders were busy raising money and designing the new school. In June of 1898, Sabina J. Larson graduated from the U. Flash forward nearly 120 years to 2017 and meet Sabina’s great-great-granddaughter Hannah, who graduated in May. Sabina and Hannah are the bookends to five generations of women in their family who have graduated from the U. Here is their story. 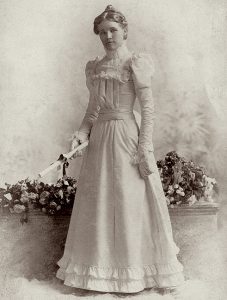 Sabina, first in the lineage line, received a “Certificate of Graduation” from the U on June 15, 1898, signed by President Kingsbury. She sewed her own dress, pictured in this photo, and styled her hair in a high bun with corkscrew curls. At her graduation, Sabina received a silver pin noting her as a member of the class of 1898— a pin that would later become a treasured family heirloom. Sabina fought for the right to vote as a suffragette and became the first licensed female mortician in the West. She worked side by side with her mortician husband, founding Goff Mortuary in Midvale, Utah. (Click on photo to see a larger image). 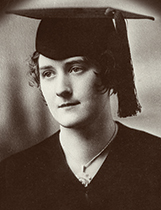 Melba graduated from LDS High School and later was the librarian at Cyprus High in Magna, including when future governor Norm Bangerter ex'60 was a student. Both Bangerter and Utah Governor Cal Rampton JD’39, one a Democrat and one a Republican, would later attend her 90th birthday party. Melba received a bachelor’s degree from the U in health and physical education, along with a teaching certificate. She also ran track and was a member of the U’s modern dance group Orchesis (featured in the large image at top here). One of her best memories about her time at the U, according to her granddaughter Jill, was dancing on the stage at Kingsbury Hall for its grand opening in May 1930. Her daughter Connie Jo and great-granddaughter Hannah also have performed on that stage. 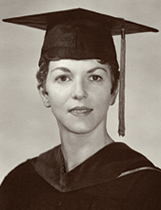 Holding down the middle spot in the line of five generations, Connie Jo received a bachelor’s degree from the U in dance education with a minor in physical education, and later, a master’s degree in modern dance with a minor in radio and television studies. She says the U offered her the finest dance education available in the country. In addition to graduating with “high honors,” she served as vice president of her junior class, was a member of many service organizations, and was named U Days Queen, head cheerleader, and president of her sorority.

“When I first realized my family had five generations of women U graduates, it took my breath away. With seven degrees between the five of us, our combined history took place in three different centuries.”
—Connie Jo 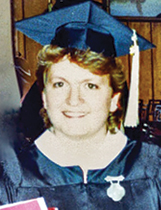 Jill entered the U on a Presidential Scholarship earned from her scholastic excellence and leadership skills. At the U, she not only received undergraduate degrees in psychology and physical therapy (PT) but also held elected office in her sorority each year and was elected president of her PT class. One of her favorite courses was—no surprise—a dance class taught by the legendary Anne Riordan BS’56. Jill’s mother Connie Jo spoke at her graduation, and her grandmother Melba was there, too. One of Jill’s prized possessions is the silver pin her great-grandmother Sabina wore the day she graduated from the U. Jill’s grandmother Melba gave it to her to wear the day of her graduation, and this year, Jill gave it to Hannah. “It was such a pleasure to pin it on my daughter’s gown when she graduated in May,” she says.

“It’s humbling to realize the trails these women before me had to blaze to attain their education.”
—Jill 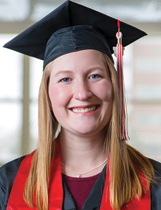 Hannah, fifth in line, graduated in May with a bachelor’s degree in emergency medical services from the College of Health and a minor in disability studies from the College of Humanities. Her favorite class was her emergency medical technician (EMT) course her freshman year. The class provided her an incentive to study hard, and when she finished, to certify as an EMT. At Commencement, as she went through the ceremony and moved the tassel on her mortarboard from one side to the other, she proudly wore her great-great-grandmother’s silver class pin with full awareness that she was the fifth link in her family’s chain of U graduates. “I loved having a piece of my family with me as I received my diploma,” she says.

“I come from a line of extraordinary women. I’m grateful to call them family and am proud to be a Ute.”
—Hannah

2 thoughts on “A Long Line of Alumnae”