Imagine you’re in a cave about the size of a long garage on the side of a lake. It’s cool, dry, and so remote that no humans have made it their home. Owls are the only inhabitants, and they spit up undigested bones, fur, teeth, and insect shells in the form of owl pellets on the cave floor. Week after week, year after year, century after century—indeed, millennium after millennium—owls do this mundane task, a part of their biology, in a remote cave no one knows exists. In so doing, they leave an unspoiled record of the creatures they ate: a compact time capsule of an ecosystem.

In the mid-1990s, archaeologists Dave Madsen and Don Grayson found and excavated a cubic meter of bones from such a cavern—now called Homestead Cave— west of the Great Salt Lake. Somehow, prehistoric humans never made it their permanent home, and its location within the Utah Test and Training Range has kept modern humans out.

This one cubic meter of bones represents 18 distinct strata dating back 13,000 years, and hundreds of thousands of carefully packed tiny bones have made their way to the permanent collections at the U’s Natural History Museum of Utah (NHMU). 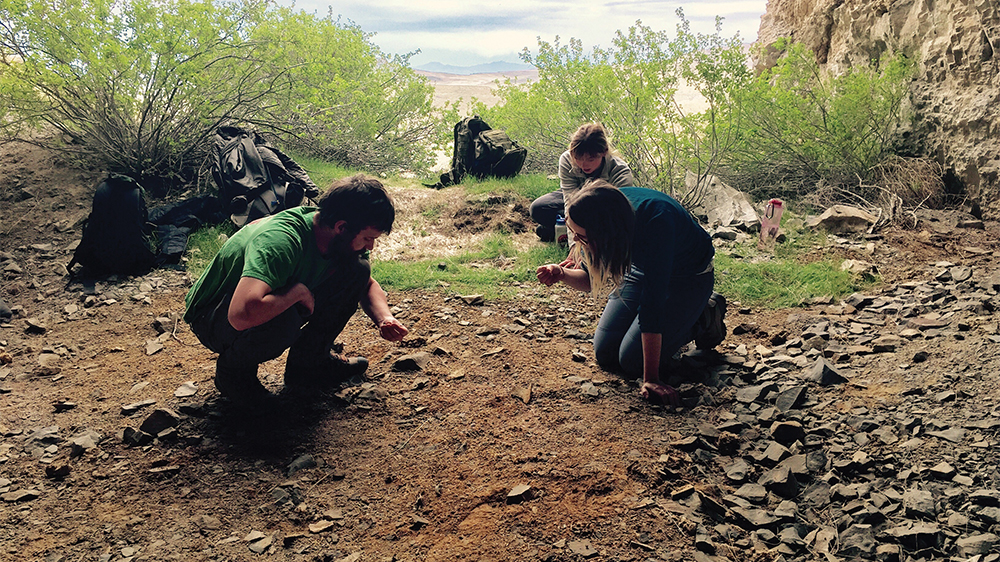 BREAKING DOWN THE BONES

Before finding his way to the museum perched just above campus, Grayson spent five years in a lab, sorting hundreds of thousands of tiny bones and classifying the age of the layers. Owls eat everything from rodents to fish, lizards, and other birds, and Grayson’s team sorted the bones into these categories. Next, researchers took a first crack at identifying the small mammals and the fish.

Both sets of bones have yielded significant and somewhat surprising insights into how these communities changed as climate changed. Homestead Cave was initially under the waterline of huge Lake Bonneville. But around 13,000 years ago, as the lake’s water level was declining, Homestead Cave was revealed. The layers of bones can now tell us what happened to the diversity and relative abundance of the owls’ prey as the lake continued to dry up.

Jack Broughton, a faculty member in the U’s anthropology department, dove into the trove of fish bones. Of the 14,866 fish bone specimens representing 11 freshwater species, he found that most came from the first stratum of the cave. Broughton explains that dramatic increases in fish remains mark periods when the lake level fell, causing increases in water temperature and salinity and ultimately the fish populations to die off. “There are two such apparent die-off events, one at 13,000 and one near 10,400 BP [Before Present],” he says. This helps paleoclimatologists get a much more precise look at climate in the Great Basin.

Broughton writes that “since there is perhaps no more sensitive measure of regional climate than the size of closed-basin lakes, paleofish faunas can potentially provide one of the more direct proxies of climate change.” According to Broughton, things heated up significantly around 10,400 years ago, as shown by a massive fish die-off.

Rebecca Terry and Rebecca Rowe, collaborators with NHMU’s Vertebrate Zoology Department, examined the Homestead Cave rodents to gain even more insights into Utah’s ecological history. Rodent diversity and abundance took a nosedive not 10,000-some years ago, but in the 1800s. Terry and Rowe attribute this decline to the change in food source, specifically the rampant proliferation of non-native switch grass that was introduced by modern human migration. Rodents adapted to the conditions that spelled the demise of fish in the lake, but were greatly affected by an unforeseen consequence of human settlement.

With small terrestrial mammals and fish now counted, classified, and analyzed, there remain several other treasures from that square meter of Homestead Cave yet to examine: reptiles and amphibians, pollen samples, and birds. Allison Wolfe MS’16, a doctoral student in zooarchaeology and awardee of an NHMU Summer Internship, is hard at work tackling the tens of thousands of avian bones found at the site. 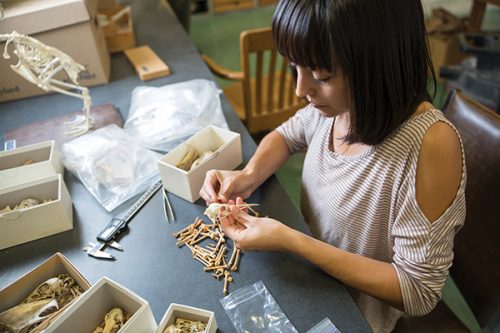 Allison Wolfe sifts through some of the oldest bones from Homestead Cave. She's catalogued nearly 4,000 bones, from up to 50 different species.

Wolfe has been sifting through many plastic bags filled with bones from just the first two strata (the oldest ones), and learning much along the way. “We know there were some big owls, like Great Horned Owls, because we’re seeing some big bones, like duck,” she explains.

In the bottom 10 cm (stratum 1) of the excavation, Wolfe has catalogued almost 4,000 different bird bones, representing potentially 50 different species. The original sifting through the bones and rough cataloguing was hampered by the lack of comparative skeletons to help identify them. Thus, some could only be identified to the genus or even family level. Thanks to the resources at NHMU and the Anthropology Department at the U, Wolfe can be much more specific with her identifications. While the work is mind-numbingly voluminous, it does have its moments of excitement: at times she has had to develop her own criteria to differentiate between species in a way that has not yet been formally described in scientific literature.

Broughton is enthusiastic about Wolfe’s work. “Distinguishing different species of closely related birds from fragmented bones is extremely difficult, and developing this skill can take many years of detailed study. I was truly shocked at how fast Allison picked this up—she has a rare gift,” he says.

Wolfe is excited to see what larger narrative might emerge. For instance, she has identified a lot of greater sage grouse bones, and there has been some discussion recently of putting that bird on the endangered species list, so she wonders if this contiguous record of the bird might reveal when its abundance changed. What’s more, now that we know humans are affecting climate, we can look at how birds responded to climate change in the past and forecast from there.

Two families of creatures—terrestrial and aquatic—have changed in different ways and at different times within our interconnected ecosystems in Northwestern Utah. And with Wolfe’s examination of airborne animals, there appears to be one more tale yet to unfold.

—Michael Mozdy is a science writer for the Natural History Museum of Utah.

An exhibit on NHMU’s third floor gives visitors a chance to read more about Homestead Cave and even imagine what this bone-combing work entails. Between the Basin and Range geology ramp and the Past Worlds dinosaur gallery is a table dedicated to Homestead Cave, complete with owl pellets and a clear tube of tiny bones researchers found on the site. It’s well worth a visit.

One thought on “The Cave that holds a Million Bones”