Esther Fujimoto ex’91, a University of Utah scientist who was on the team that helped discover a breast cancer gene, died August 21 after being hit by a power boat while swimming in Pineview Reservoir near Ogden. She was 49.

Sakae Esther Fujimoto was born October 31, 1961, in Rexburg, Idaho, to Masayoshi Fujimoto and Kiyoko Homma Fujimoto. She was the youngest of five children and was baptized a member of The Church of Jesus Christ of Latter-day Saints. Esther was reared and educated in the Rexburg area, graduating from Madison High School in Rexburg as salutatorian in 1980. She also graduated with high honors from Idaho State University in Pocatello with a bachelor’s of science degree in biochemistry in 1984. She then attended medical school at Northwestern University in Chicago and later at the U, but she found her real passion was biological research. A senior laboratory specialist in the U’s Department of Neurobiology and Anatomy who had worked at the U Hospital since 2003, Fujimoto was researching nervous system development and cerebral palsy at the time her death, and her professional work was published in a number of noted scientific journals. Her work on the breast cancer gene was especially significant, as she’d had her own brush with the disease several years ago. Plagued with hip problems from birth, Esther eventually underwent a double hip replacement. But she loved to swim and swam daily, in part to manage the pain.  She also enjoyed healthy eating, cooking, shopping for clothes, following ice hockey and other sports, stock market trading, and gardening. Having grown up on a farm, she cultivated a gift with animals and learned a strong work ethic.

Esther is survived by two sisters, Cynthia Seiersen of Hilo, Hawaii, and Denice Fujimoto of Ogden; two brothers, Bryan Fujimoto of San Jose, Calif., and Andy Fujimoto of Boise; and her cats. She was preceded in death by her parents, and interment is in Burton Cemetery, Rexburg, next to her parents. In lieu of flowers, the family requests that contributions be made to the University of Utah Health Sciences Development, 540 Arapeen Drive, Suite 120, Salt Lake City, UT 84108-1251 for the research of Josh Bonkowsky in memory of Esther Fujimoto. Condolences may be sent to the family at www.myers-mortuary.com.

Edited from news reports, the public notice published 8/21/11 by the Ogden Standard-Examiner, and the 8/27/11 notice in the Rexburg Standard Journal. 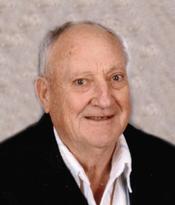 Billings Witbeck BS’57, a longtime University of Utah manager in education administration, died August 20 at his home outside of Rexburg, Idaho. He was 82.

Billings Witbeck was born June 23, 1929, in Roosevelt, Utah, to Dee and Margaret Billings Witbeck, The eighth of 11 children, Billings grew up in Roosevelt. After graduating from high school, he served in the United States Army. After returning to Utah, Billings attended the University of Utah, where he met the love of his life, Mary Louise Wilson. On August 15, 1955, the two married in the Salt Lake Temple. Billings graduated in business from the U, and the school immediately hired him. A loyal employee, he worked for 40 years before retiring and moving from “The Homestead” in Salt Lake City to Syracuse, Utah. Three years later, in 1996, he built Mary Louise a home on the Teton River in Rexburg, Idaho, where the whole family continued a love for outdoor activities including boating, skiing, camping, hunting and fishing. An active member of The Church of Jesus Christ of Latter-day Saints, Billings loved and focused on family history. Recently, he and Mary Louise had published The Will to Make It, The Wit to Survive, a comprehensive history of their ancestors, themselves, and their posterity.

Edited from the notice published by the Flamm Funeral Home. <http://www.flammfh.com/fh/obituaries/obituary.cfm?o_id=1242687&fh_id=11942>