The Natural History Museum of Utah, tucked into the craggy face of the Wasatch Mountains, has opened as the University of Utah’s newest window to the past. Festooned with a glimmering façade representing rock formations and seismic fault lines, the angular exterior both blends in with and stands out from the surrounding hillside.

The exterior is just one example of how planners capitalized on the rare opportunity to wow visitors not just with the museum’s contents but also its container. The new facility—from the unique façade to the spacious, canyon-shaped lobby to the serpentine gallery layout—teems with opportunities for learning and understanding.

“We wanted the building and the exhibits to be reflective of each other,” says Sarah B. George, the museum’s executive director.

Located in upper Research Park near Red Butte Garden and nudging the Bonneville Shoreline Trail, the building represents a new chapter in the museum’s own history, starting with a name change. The George Thomas Building on Presidents Circle served as the base for the Utah Museum of Natural History for 42 years. With the move, the name became the Natural History Museum of Utah, emphasizing the focus on the natural world.

The new structure, says George, is both beautiful and functional. “It’s so much better than I ever thought it would be,” she says. “We spent a huge amount of time thinking about how the building should be organized before they even designed it. Now, seeing it coming all together, I think there are a few things I’d change, but not much.”

Nearly everything about this museum is new. “Objects are not new, obviously, but the context, all the exhibits, are new,” George says. “There are things to do, things to experience, things to read, things to hold and manipulate. It’s very, very interactive.” 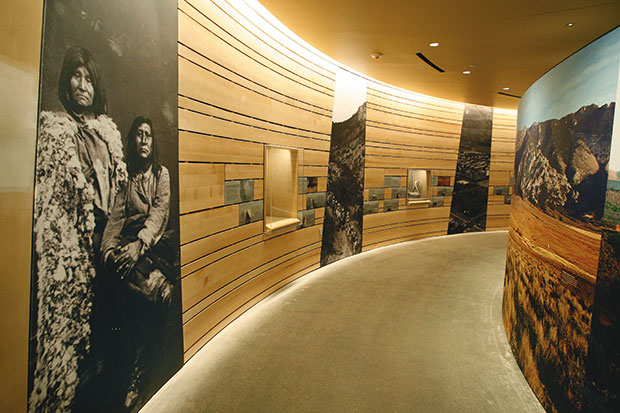 “There are things to do, things to experience, things to read, things to hold and manipulate,”  says Sarah B. George, the museum’s executive director.

Todd Schliemann, a design partner at Ennead Architects of New York, the museum’s architects along with GSBS Architects of Salt Lake City, says designers initially had no preconceptions about what the museum should look like but spent a lot of time trying to understand the region.

“Pretty quickly, after touring the state and talking with many people, [we discovered] the region is about the land and how people interacted with it and interact now with it after tens of thousands of years,” he says.

At a site “on the edge of culture and nature,” as Schliemann describes it, the building rests in the chiseled hillside and features an exterior made of horizontally ribbed copper, concrete, and painted aluminum, suggesting the look of striated rock. The visual effect is broken up by vertical lines representing seismic faults.

“It’s very much a metaphor for Utah geology,” George says. And that’s just one of the metaphors at the new museum. Inside, the most conspicuous is the main lobby, where an uneven triangular network on opposite walls “evokes that massive feeling” experienced deep inside a granite- or limestone-lined canyon of northern Utah, according to George.

Schliemann says the lobby is intended to give visitors “an emotionally charged moment” akin to those people experience when entering a Gothic cathedral.

“Many museums are boxes, and they’re very clinical and sophisticated, but they don’t bring out that sense of awe and of the child in you when you see something that touches you personally,” he says.

The lobby also includes a tease. From the museum’s collection of about 1.2 million objects, about 800 are included in a three-story-tall display representative of what awaits in the exhibits: fossils, shells, insects, skulls, Native American artifacts, and other archeological material.

From the lobby, most visitors will descend through the galleries occupying the building’s south end. Many will start with the Native Voices section, which is above-ground, circular, and facing east, according to the wishes of an advisory committee representing Utah’s five Native American nations—the Goshute, Navajo, Paiute, Shoshone, and Ute. “It’s different because it doesn’t have the curator’s voice,” George says. “This is, in many ways, a cultural museum, whereas the rest of the museum is about science.”

The science portion includes the Sky Gallery and its outdoor terrace. Inside are weather and climate information, sky charts, and a heliostat that projects a real-time image of the sun, complete with sunspots, solar flares, and solar storms. 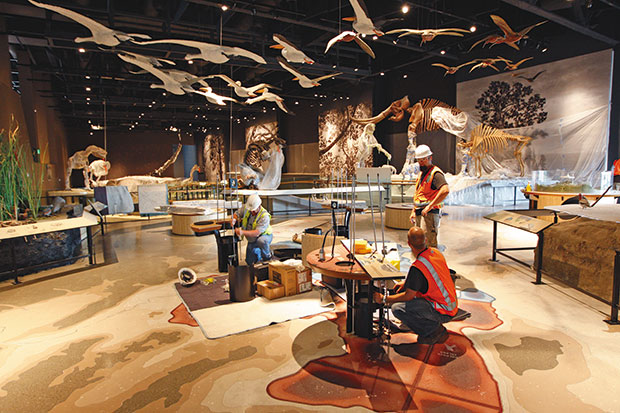 “[We discovered] the region is about the land and how people interacted with it and interact now with it after tens of thousands of years.” —Todd Schliemann, design partner at Ennead Architects of New York

Among other galleries are those focused on life, from the basics of DNA to five vast ecosystems, as well as exhibits on land and past worlds, complete with iconic fossils and reconstructed dinosaur skeletons.

But the museum’s exhibits offer more than just bones. The galleries are chock full of habitat dioramas and murals, a “digital globe” displaying information about various worlds, water tables for hands-on demonstrations of erosion, and rocks that visitors can touch. The building also has learning labs, classrooms that can be closed for special programs or open for viewing artifacts, and a “dinosaur dig” for youngsters. Folks can even watch staffers working inside a fossil preparation lab. And an area called “Our Back Yard” features a crawl-through habitat, water table, live animals, and a kitchen primed for experiments, all designed for children ages 2 to 5.

Freedom and flexibility infuse the galleries. “A lot of museums in the ’80s and ’90s had a mediated pathway—‘you enter here and follow this path’—and we didn’t want that,” George says. “We wanted people to be able to build their own experience, so they can walk through in different ways.”

The building’s north side comprises the “back of house” operations, which George acknowledged as vital to the university but “not all that romantic.” They include loading docks, five research collection storage rooms, an exhibit preparation area, staff offices and conference rooms, areas for students’ research, and a changing-exhibits gallery with climate controls allowing the museum to bring in exhibits it previously could not. The museum also contains about a dozen research labs. The former site had no labs, no room for students, and no more room for faculty offices. “Here,” George says, “we have room to grow our research contributions.”

The old site had only about 67,000 square feet, but the new building, called the Rio Tinto Center, contains 163,000 square feet. Much of it is open to the public—an outdoor terrace, community rooms, and the lobby—for either milling around or renting for events. And visitor amenities abound. A café is just one example. “At the old building, you couldn’t get a Coke, and we had one bathroom. We’re trying to be very welcoming to the general public,” George says.

The wheels began rolling for a new building with a 1980s study about the museum’s future, and the University designated the property in the late 1990s. Fundraising followed. Ultimately, the $102.5 million price tag was met with a combination of $25 million in state funds, $17 million from the federal government, $15 million approved by Salt Lake County voters, and about $45 million in private money. Donations ranged from $5 to a $15 million gift from international mining company Rio Tinto.

Moving began in February 2011, although the transfer of collections won’t finish until June 2012. A formal dedication took place Nov. 17. After more than three years of construction, George expects the move to spark growth in several ways. The number of collections and staff members should rise. Memberships likely will expand by six to seven times the 750 members the museum had last winter when it closed for the move. The number of volunteers, which George describes as “our lifeblood” and an ongoing need, is expected to climb from the current 350 to meet the museum’s goal of 500 in its first year at the new site. And the number of visitors expected the first year is pegged at about 265,000. That’s far above the typical 90,000 annually at the old site, although that latter figure is notable, considering that the former space on Presidents Circle had only 12 parking stalls.

With the new building, the number of objects on display jumps from fewer than 1,000 to more than 3,000. For all of its aesthetic sparkle and multitude of uses, George says, the Rio Tinto Center is “just a great platform.”

At the old facility, she says, the museum wasn’t able to fulfill its mission very well. “The things we can do now, the possibilities are endless,” she says. “Expanding research, new and cutting-edge educational programs, new ways of interpreting science—those things are possible here, where they were not possible in the old building.

“And while we’re interested in being a destination, we want even more to be a trailhead, a starting-off point, for people to explore the rest of the state of Utah.”

— Brice Wallace is a longtime journalist who now works as a freelance writer in Roy, Utah.

2 thoughts on “Reflecting the Land”