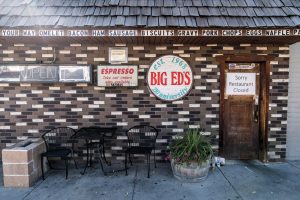 (“One More“, Winter 2017) I went into Big Ed’s one day in summer of 1970-something, and there was jazz piano legend Marian McPartland sitting at one of those little two-seat tables. She dipped her head in permission for me to pull up the vacant chair and join her. I’d seen her play across the street in Kingsbury Hall…. And now, there she was eating a salad at Big Ed’s. Years later, when I heard her talking and playing on NPR, I thought of Big Ed’s.

A friend of mine (Alan Weight) went into Ed’s one day and ordered chili. Alan took a bottle of ketchup and began pouring it (rather liberally) into the chili. From across the room, Ed saw him. Seconds later, he came out with another bowl of chili, went straight to Alan’s table, switched the bowls with a loud ‘clunk,’ and said ‘NOBODY puts ketchup on my chili!’

(“Why Humanities Matter,” Winter 2017) I studied metallurgical engineering, and a class in humanities was required. I thought it was a waste of time and not relevant. However, the U-printed two-inch-thick book of required reading was interesting. I read it all. Over the years I have many times recalled something from the material, and I must agree that the class influenced my thinking in a positive way…. So from an old grad, I highly recommend the topic be included in the required classes.

I agree with [Dianne Harris’s] argument that the integrity of democracy depends on an informed public. Exposure and understanding is important, at the very least because we decide whether to fund the humanities, or the arts, or even public science.

(“Genes and Addiction” Winter 2017) Are there any addictions that if genetically the person is not susceptible but engages in repeated prolonged use, they will become addicted? Your article and numbers seem to suggest less personal accountability and more genetics?

(In response) It is impossible to know if you are genetically susceptible until it’s too late—it is like testing how strong a rope is by pulling on it until it breaks. Genetic susceptibility does not mean that someone who is not susceptible will never be addicted. And genetics is maybe 60 percent of a person’s vulnerability. This will be different from one person to the next, as well….

*Excerpted from longer comments made in response to articles online at continuum.utah.edu. Visit linked articles to read more.