Yes, you can beat Alf Seegert at his own games.

His wife Natasha Seegert does it all the time, especially when playing her husband’s latest creation, the clever, enchanting board game The Road to Canterbury.

Alf Seegert BS’96 MS’98 MA’04 PhD’10 is an assistant professor and lecturer of English at the University of Utah. He’s a recorded musician (he played guitar in a rock band called 23rd Hour in the 1990s), as well as a teacher and published literary critic, and he has been repeatedly recognized for his penchant to pen opening sentences to the worst possible novels in the Bulwer-Lytton Fiction Contest, a tongue-in-cheek annual competition sponsored by San Jose State University that challenges writers to compose deliberately bad lines. (He scored a “Dishonorable Mention” in Purple Prose for: “The Zinfandel poured pinkly from the bottle, like a stream of urine seven hours after eating a bowl of borscht.”)

You might say Natasha Seegert BS’00 MS’04—who is associate director of environmental studies at the U and a doctoral student in communications—pushed the first metaphorical domino in her husband’s path toward game design a decade ago when she nudged him to find games they could play together. At the time, Alf Seegert was content staring into a computer screen while gaming. But he tapped the words “board games” into an Internet search engine, and soon they discovered so-called Eurogames—designer board games that originated in Europe. The artfully done, higher quality Eurogames became the impetus for regular gatherings with friends over the years. “I’d rather be playing with people who are in the same room with me,” Seegert now says.

The designing bug soon gnawed at him. Since his first effort in 2001, he has gone on to publish three games so far and is working on another for possible release in 2012. Five of his prototype designs have been end-round finalists at the annual Hippodice board-game design competition in Bochum, Germany. “Hippodice is pretty much the European Sundance of games, where major publishers find hot new game designs for publication,” Seegert says.

He recently agreed to play his newly minted The Road to Canterbury at his Salt Lake City home—listed on the National Historic Registry—over cups of black and green teas. With the players starting by competing to see who has the best cackle, to determine who goes first, the game begins. (Seegert went second for our play date.)

Greed can work for or against players in The Road to Canterbury. The game’s playing cards and boards are exquisitely made and add an artistic and historical element to the game. Suspense builds near the end of competition as pilgrims are killed off and players amass gold pieces adorned with the image of Geoffrey Chaucer, author of the game’s poetic inspiration, The Canterbury Tales. By the end, if you’re cunning enough (and able to distract Seegert enough with questions about how to play), you, too, can beat the author at his own game.

What kind of board games did you play when you were a child, and what were your favorites and why?

Board games have fascinated me from a very early age. As a youngster in the early 1970s, my neck-hairs would stand on end when playing Which Witch and Mousetrap because of how they combined suspense, strange pieces, and risky (or violent!) consequences. During the horrors of junior high school, fantasy role-playing games like Dungeons & Dragons were a safe haven for me (my friends, thankfully, were fantastic dungeon masters capable of conjuring worlds far preferable to the actual one I found myself in at the time). I loved Milton Bradley’s electronic board game Dark Tower and in ninth grade programmed a version of it into the high school mainframe computer (I used little monochrome ASCII characters to represent each player, the Tombs, the Bazaar, etc.). But except for an occasional session of the fantasy game Talisman, I didn’t play many board games again until I hit 30. I was spending a lot of time by myself playing computer games, and my girlfriend (now my wife) wanted me to play games with her instead. We did some research and stumbled on The Settlers of Catan, which proved a potent gateway drug into the brave new world (well, new to us) of Eurogames. Once we introduced Catan to our friends, Saturday nights quickly became a regular and much-anticipated ‘game night’ event, which has continued now for over 10 years.

When and how did you first know you had a knack for inventing board games?

Playing many different and engaging Eurogames eventually inspired me to start creating board games of my own. In 2001, I gave my first shot at designing some games based on astronomy, permaculture, and geology. None of my first attempts got very far, but with practice, I got better, and in 2004 my game based on the Oracle of Delphi came in second place at the German game design competition Hippodice. This was a big deal for me, because major publishers and jury members of the Spiel Des Jahres (Game of the Year) award were those choosing the winners. Since then, four more of my games became end-round finalists at Hippodice, and before long my designs began to attract the attention of major publishers.

Why Road to Canterbury for a game? 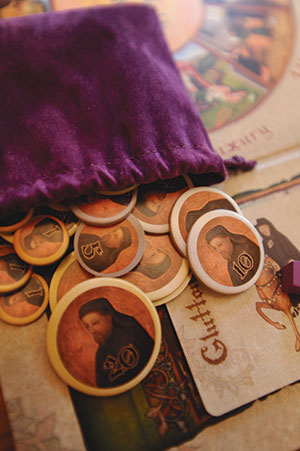 The “gold coin” game pieces in U Professor Alf Seegert’s The Road to Canterbury have an image of poet Geoffrey Chaucer. (Photo by Stephen Speckman)

The Road to Canterbury is my third published board game, and I detect a thematic trend. … It appears I enjoy making games where players get to play the ‘bad guys.’ In my prior two published game designs—Bridge Troll and Trollhalla—the players take on the role of hideous, nasty trolls who either guard bridges waiting to extort (and eat) passersby, or who plunder and pillage helpless islanders and livestock from longships, Viking-style.

The details of this sort of theme are not exactly Chaucerean, but such diabolical main characters come closer than one might guess. As you might already know, in The Canterbury Tales, a company of medieval pilgrims journeys together from the Tabard Inn at the outskirts of London to the shrine of Thomas Becket at Canterbury, entertaining each other with stories along the way. Some of these tales are incredibly bawdy (and very funny). Many challenge existing social hierarchies and expose the hypocrisy of those who supposedly represent God and the church.

Chaucer makes his Pardoner into an especially striking figure of such religious hypocrisy. In the Prologue to The Pardoner’s Tale, the Pardoner’s motto is ‘Radix malorum est cupiditas,’ or ‘Greed is the root of all evil.’ But he is himself the greediest member of the entire company! … So, although—or because—the Pardoner is such a despicable member of the company of pilgrims in The Canterbury Tales, he cries out for role playing, and the premise of my game became this: ‘As you travel together with pilgrims along the road to Canterbury, you sell indulgences delivering pilgrims from the eternal penalties brought on by the Seven Deadly Sins. But to succeed as a pardoner, you will need to do more than just sell forged pardons for quick cash. To keep your services in demand, you will actually need to lead these pilgrims into temptation yourself! Perhaps some phony relics might help? There is one big catch. The Seven Deadly Sins live up to their name: Each sin that a pilgrim commits brings Death one step nearer, and a dead pilgrim pays no pardoners!’ …

I suppose that the motivating allure I find in designing such games is much the same that I find as a film lover, reader, and in teaching film and literature. As I see it, one of the great powers of storytelling—or more generally, of play—is being able to fictively experience the world or perform as someone or something very much unlike oneself in ‘actual life.’ …

In The Road to Canterbury, however, my goal was not so much to actually see things from the Pardoner’s perspective—for he is a despicable hypocrite and victimizer for whom I feel little sympathy—but to instead just have fun in playing somebody so utterly corrupt that few of us could imagine being like that in real life. Or so I hope, anyway.

When did you first read The Canterbury Tales?

In high school. We all giggled at the naughty bits.

How many times have you read it?

Several, including here at the U in a graduate-level Chaucer course taught by Dr. Tom Stillinger, in English. My favorite tale is The Miller’s Tale—I love how it plays with and inverts the relations between carnal and astronomical bodies in hilariously bawdy ways. …

Is the game more escapism and just for fun or is it your intent to teach some sort of life lesson through the game?

Well, I’m with Marshall McLuhan here: The medium is the message. … As for my own specific game, the No. 1 goal was for it to be fun. It’s irony-laced (I certainly don’t advocate the values of the Pardoner, though I do want players to cackle like one), and I do hope that players will feel that much more inclined to read Chaucer after they play. He’s delightful!

The Road to Canterbury has a little logo on the back that reads ‘Knowledge in a Box.’ This refers to a line of games by the publisher FRED/Gryphon Games of true games that enhance learning about a particular subject. … In my own game, the artwork is all 16th-century or earlier. The board is taken from Hieronymus Bosch’s fascinating tabletop The Seven Deadly Sins and the Four Last Things (when I bumped into that piece of art a few years ago, I said to myself: ‘I’ve got to make a game for that tabletop!’). The illustrated pilgrim cards in the game are taken from the early 15th-century Ellesmere manuscript of The Canterbury Tales. It’s quite something to look at. 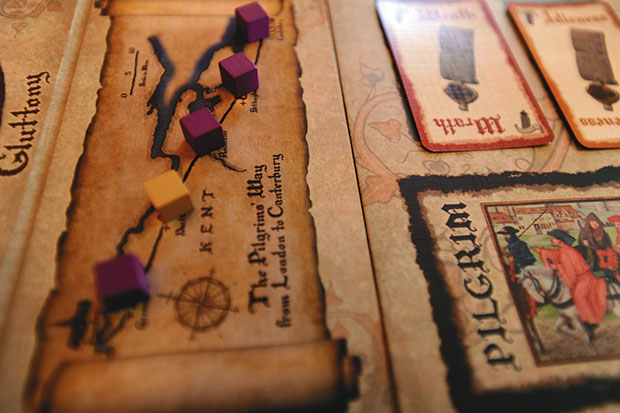 The images on the pilgrim cards in The Road to Canterbury were drawn from the 15th-century Ellesmere manuscript of Chaucer’s poem. (Photos by Stephen Speckman)

What has been the response to the game?

So far, reviews from play testers have been generally pretty positive. And there’s been a tremendous interest in seeing a ‘literary board game’ like this one expressed both in the States and abroad. The Guardian in the U.K. did an entire piece on my game surrounding this topic. My game also received a write-up in The Chronicle of Higher Education, Huffington Post, Onion AV Club, MTV Geek, and a little blurb in The New Yorker’s blog.

To which do you identify the most: board game designer, author, musician, professor, Renaissance man; perhaps something else?

I think it’s a combined package. I teach better because I design, and I design better because I teach. And both depend on regular exploration through scholarly research. In short, there’s a lot of unexpected cross fertilization that happens between these various interests that works really well, I think.

— Stephen Speckman is a freelance writer and photographer based in Salt Lake City.

This sentence won University of Utah professor Alf Seegert a “Dishonorable Mention” in the Historical Fiction category of the annual Bulwer-Lytton Fiction Contest:

“Wet leaves stuck to the spinning wagon wheels like feathers to a freshly tarred heretic, reminding those who watched them of the endless movement of the leafy earth—or so they would have, if only those fifteenth-century onlookers had believed that the earth actually rotated, which they didn’t, which is why it was heretical to say that it did—and which is the reason why the wagon held a freshly tarred heretic in the first place.”

The Road to Canterbury game, published by Gryphon Games, may be purchased online for $59.99 at www.theroadtocanterbury.com or at the Salt Lake City store Game Night Games, located at 2030 S. 900 East (www.gamenightgames.com).

2 thoughts on “The Art of Play”