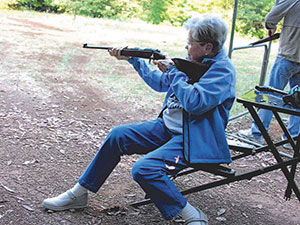 Ruth A. Davis Strampe BS’38 was a member of the University of Utah’s pistol team while a student and to this day remains a crack shot. While target shooting during a recent visit to a guest ranch in California, she hit five out of seven small targets during her first time out. At West High School, she was the first woman to be editor of the yearbook. After enrolling at the U at just 16, she joined the Kappa Kappa Gamma sorority and became freshman editor of the U’s now-defunct Utonian yearbook. She received freshman scholastic honors as a member of Alpha Lambda Delta. She went on to serve as Junior Class Secretary, became the 1938 Homecoming Queen, and was named to the Beehive Honor Society and Mortar Board. After marrying Wisconsin basketball star William Strampe and moving to Southern California, she taught in the Los Angeles Unified School District and Arcadia School District until retiring in 1974. Strampe remains active in her sorority and frequently visits friends who still reside in Salt Lake City. 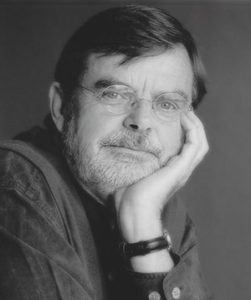 Skip Branch BA’68 was recently awarded the Silver Medal Award for lifetime achievement by the Utah chapter of the American Advertising Federation. Branch’s work in the advertising industry now spans five decades. He began as an advertising salesman at ABC in Los Angeles in 1963. After returning to his native Utah, he transitioned from copywriter to sales manager at a local television station before eventually paying heed to his entrepreneurial inclinations and founding his own agency in the early 1970s. In 1989, he joined Harris and Love Advertising, which eventually became part of RIESTER, a Phoenix-based advertising agency with offices in Los Angeles and Salt Lake City. Branch is now a senior consulting partner for RIESTER. AM

Neal Copeland BS’71 PhD’76 and wife and research partner Nancy Jenkins, Ph.D., have joined The Methodist Hospital Research Institute (TMHRI) in Houston as the first luminary scholars recruited by Texas through the Cancer Prevention and Research Institute of Texas. The internationally acclaimed team now directs basic research for TMHRI and the Methodist Cancer Center, serving as co-directors of cancer biology. The researchers, both members of the prestigious National Academy of Sciences, have identified hundreds of genes associated with cancers including leukemia, lymphoma, melanoma, pancreatic, lung, breast, and prostate. The duo returns to the United States after spending five years at Singapore’s A*STAR (Agency for Science, Technology and Research). Copeland was executive director of the Institute of Molecular and Cell Biology (IMCB), and Jenkins served as deputy director of IMCB’s Genetics and Genomics Division. Since meeting as postdoctoral fellows at Harvard Medical School more than 30 years ago, Copeland and Jenkins have co-authored some 780 papers and been cited more than 30,000 times.

Mary Relling DPH’85 was recently honored by the Pediatric Pharmacy Advocacy Group with the Sumner J. Yaffe Lifetime Award in Pediatric Pharmacology and Therapeutics. Relling is chair of pharmaceutical sciences at St. Jude Children’s Research Hospital, in Memphis, Tenn. One aspect of her research seeks to determine whether certain subgroups of patients would benefit from genetic testing more than others. The award is the latest in a succession of accolades Relling has received for her work over the course of a career that has allowed her to combine her two passions: oncology research and pediatrics.

Bryce C. Bird BA’91 is now the leader of Utah’s Division of Air Quality. Bird has been manager of the division’s planning branch for four years and has worked extensively with groups focused on pollution control plans required under federal law. Bird began his career at the state’s Department of Environmental Quality in 1991 after completing a degree in biology at the U. He has served in the compliance branch and as manager of the hazardous air pollutants section, in addition to leading the planning branch since 2007. Bird also serves in the Utah National Guard, where he has been a member of the 23rd Army Band for 24 years. 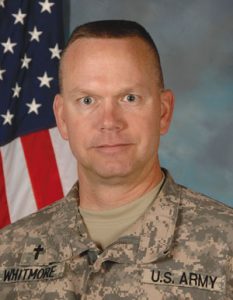 Gene Whitmore BS’90 MPA’93 has been selected as an investment advisor on a three-person committee advising the Department of Defense Investment Board in managing more than $600 billion in retirement trust funds. Whitmore is a captain and chaplain in the Army National Guard and an investment advisor in Utah. Service on the committee is a significant selection, with ramifications that can affect potentially millions of current and prior troops, Whitmore notes. After the board was unable to find the assistance it needed among active military personnel, it consulted several investment houses and was quickly offered the kind of assistance it wanted, but with steep management fees. Finally, Investment Board member Major Gen. Phillip McGhee, the Army Budget Director, suggested that if the active duty forces had no one with the appropriate skills and the investment houses were asking for compensation that could be problematic, the reserve component of the military should be considered a resource. An announcement was posted on Defense Department Web sites, and rank was not a consideration, only skill and experience. The other two committee members selected are reservist investment advisors in Oklahoma and Florida. After a preliminary analysis of cash management practices, the new committee suggested some modest changes to start, with additional recommendations to the board to follow. The return on the trust fund investments, according to the investment manager’s projections, could increase by $1 billion for the year. Whitmore says, “We don’t mind getting a little attention for our project, being investment rock stars (as we audaciously see ourselves), and the fact that despite perceptions, there are some financial success stories in the government.”

Melissa (Loew) Schaefer BS’97 is currently the global retail research leader within IBM’s Institute for Business Value. In her current role, Schaefer researches and analyzes consumer and retail trends to provide retail-business executives with insight and recommendations. Her work also assists IBM in identifying future trends that factor into product development. Schaefer has more than 20 years of leadership experience in the industry and is the author of publications including Capitalizing on the Smarter Consumer (2011) and The Retail CEO: Capitalizing on Complexity (2010). 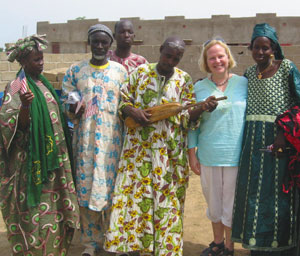 Sarah Buchanan poses in summer 2011 with nyamakala friends in Ségou, Mali, a city of around two million people. The man is playing an instrument called an ngoni, which, among the Fulani, is played primarily by the nyamakala. The American flags some hold were gifts from Buchanan.

Sarah Buchanan MA’95, associate professor of French at the University of Minnesota at Morris, received a 2011 Imagine Fund award, which she used to support a research trip to Mali for a project on the concept of “nyama,” which she says is “loosely defined as the powers of creation and destruction inherent in the spoken word.” In Mali, Buchanan interviewed members of the nyamakala caste of the Fulani ethnicity (and others) to learn more about their conception of nyama. (Nyamakala means “the wielders of nyama.”) Imagine Fund faculty awards support innovative research in the arts, humanities, and design at the University of Minnesota. Buchanan is a francophone specialist who researches and teaches the cinemas, literatures, cultures, and histories of the countries and places where French is spoken, but not usually those of France itself. She specializes in Sub-Saharan African cinema and oral traditions as well as Moroccan oral tradition and immigration in France, with additional research on the French Caribbean. Along with a master’s degree in French literature from the University of Utah and a bachelor of arts in French from St. Olaf College, Buchanan holds a doctorate in 20th-century francophone literature and film from the University of Minnesota. She has also studied at Sorbonne Universités in Paris and Institut de Touraine in Tours, both in France.

Jennifer Talley BS’99 MSW’02, director of research and development at Squatters Pub Brewery in Salt Lake City, recently won the craft-beer industry’s Schehrer Award for innovation in brewing. Born and raised in Chicago, Talley moved to Utah in 1988 to pursue her education at the U and, in tandem, her passion for home-brewing. In 1991, she was hired as a brewer’s apprentice at Squatters. With the opening of the company’s microbrewery in 1994, she became head brewer of Squatters and shortly after won a full scholarship to the Seibel Institute of Brewing Technology in Chicago. Talley has now been recognized time and again for her beers, both nationally and internationally, and has become a well-respected beer judge. 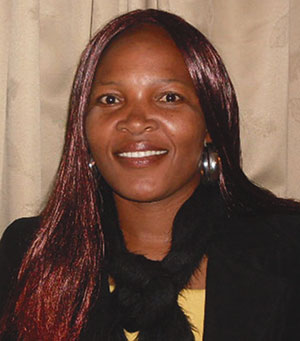 Poloko N. “Naggie” Mmonadibe MSW’04 is currently a lecturer in the Department of Social Work at the University of Botswana, where she received a bachelor’s degree in social work. She is involved in health-related social work programs as well as a research project titled “Strengthening Research Capacity in Africa: Gender, sexuality and politics with a strategic focus on the lives of young women,” which is sponsored by the African Gender Institute in Capetown, South Africa. The project uses the research process to encourage young women on African university campuses to take action to promote their sexual and reproductive health and rights. Mmonadibe hopes to eventually pursue a doctorate.

Felicia Martinez BS’05 is currently a reporter and producer with KSWT news in Yuma, Ariz. Martinez came to Yuma from Los Angeles, where she had worked in entertainment television on shows such as So You Think You Can Dance and Dancing With the Stars. Martinez is a native of Utah and graduated from the U with a major in broadcast journalism. While in college, she interned at KPNZ and 97.1 KZHT and worked part time for KSTU-TV. She also danced for the U’s Crimson Line Dance Team in college, danced professionally for various leagues in Utah, and made it to the finals in competition to select new members of the Denver Broncos Cheerleaders.

Kevin Glen Walthers PhD’06 has been named president of Las Positas College in Livermore, Calif. Walthers had most recently served as the vice chancellor for administration for the West Virginia Community and Technical College System and the West Virginia Higher Education Policy Commission. Prior to his time in West Virginia, he was vice president for finance and administrative services at the College of Eastern Utah. He also held policy roles with the Utah State Legislature and as a senior administrator with Utah’s State Board of Regents.

Kent Phippen BS’07 took over as race director of the Ragnar Relay series’ marquee run, Wasatch Back, after the 2011 race. Phippen was previously race director of the Washington, D.C., Ragnar Relay. A lifelong runner, Phippen has worked as a senior race director for Ragnar for about two years. Born in Idaho but raised in Farmington, Utah, Phippen graduated from the Eccles School of Business at the University of Utah with a degree in entrepreneurship. The father of four children says, “No job I’ve ever had compares to Ragnar and the fulfillment it gives.”

Ross Chambless MA’11 presented his environmental humanities master’s thesis in the form of a radio journalism project titled “Plugging Into Nature: A Radio Journey to Source My Electricity,” segments of which aired on KUER-FM, a public radio station licensed to the University of Utah. In the future, he hopes to develop the work into a one-hour radio documentary. Chambless grew up in Utah before pursuing a degree in journalism at the University of Texas-Austin. He completed the U’s environmental humanities program in two years while working as a communication intern for the U’s Office of Sustainability. Chambless has also been writing about sustainability on the U’s blog, RedThread. Read an entry here.