At 83, a person with big plans may not feel she has the luxury of dilly-dallying around. So when Beverley Taylor Sorenson BS’45 invited a few influential people to her kitchen one morning in 2007, she got right to the point.

Turning to Hardman, Sorenson smiled and said: “Tell me why the U hasn’t focused on arts education.”

So began a conversation and, eventually, an alliance. Now, nearly five years later, the $24 million Beverley Taylor Sorensen Arts and Education Complex is taking shape on the University of Utah campus.

What Sorenson has on her side is money and a fierce determination that every child in every school in Utah should have the chance to both learn the arts and learn through the arts by integrating them into the core academic curriculum. She wants all of Utah’s colleges and universities to help prepare the way. 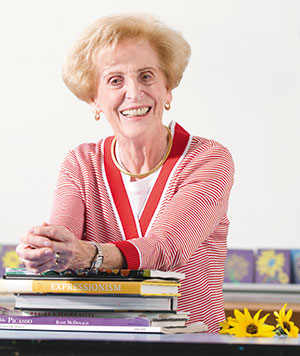 Sorenson is, at first blush, an unlikely crusader. She’s now 87 and in many ways unassuming, and for years she seemed to live in the shadow of her late husband, billionaire biomedical inventor, businessman, and philanthropist James LeVoy Sorenson ex’48.

She was the yin to his blunt, brash yang. “Dad was so bold, and he didn’t care what people thought of him as long as he was doing the right thing,” says their daughter, Gail Sorenson Williamsen BA’06, who notes that her father “took charge of a room by the way he set his jaw.”

On the other hand, says Williamsen, “Mom is refined and delicate,” the great-granddaughter of John Taylor, third president of The Church of Jesus Christ of Latter-day Saints, a man whom Brigham Young called “Prince John.”

Beverley Taylor grew up in Salt Lake City, the shy next-to-youngest of six children. The older girls got piano lessons—sister Helen went on to play for dance legend Martha Graham in New York—but by the time Beverley was 5, at the start of the Great Depression, the car dealership where her father was sales manager had closed its doors. There was no money for piano lessons, so she learned from oldest sister Virginia. At 13, Beverley landed a job playing for a ballet school next door to her junior high.

She was a hard worker but also a daydreamer. In class, she might, for example, be imagining the man she would marry—“he’d have blond, curly hair and be from California,” Sorenson now recalls.

Sometimes when she daydreamed as a young girl, she also made a list of goals: 1) Get a college degree, 2) Save $1,000, 3) Become a kindergarten teacher. She got the degree and a teaching certificate from the University of Utah in 1945 and saved $1,000 from her after-school job sorting mail at the post office.

“There’s a big difference between integrated instruction done well and done at a more simplistic level.” If the Beverley Taylor Sorenson Arts and Education Complex does what it sets out to do, “it will be groundbreaking.” — Michael Sikes of the Arts Education Partnership in Washington, D.C.

Then she moved to New York, into an apartment with her sister, and got a job teaching kindergarten in a Quaker school in Brooklyn. On Sundays she attended an LDS ward in Manhattan, which is where she soon met the man of her daydreams.

Jim Sorenson, curly-haired and blond, was in New York to attend officer’s training school for the U.S. Maritime Service. He’d been born in Rexburg, Idaho, but he had grown up in Yuba City, Calif., so he fit the bill.

She laughs when she recalls her first impression of him: aggressive and outspoken, the kind of young man who spouted strong opinions in Sunday school. When he tried to kiss her on the first date, she said “Absolutely not.” When he asked her to marry him on the third date, she said “No way.”

On the other hand, she could see right away that he was the kind of man who made things happen.

After they married, she says, “we started our own kindergarten” by eventually raising eight little Sorensons. And then Jim Sorenson set about building an entrepreneurial empire—starting with buying up pasture land that eventually became prime real estate along the Wasatch Front.

In 1957, he co-founded Deseret Pharmaceutical, and he later invented the first disposable paper surgical mask, the first modern intravenous catheter, and the first real-time computerized heart monitor. He eventually held more than 40 medical patents and owned Sorenson Companies, a parent company of 32 corporations.

Beverley Sorenson wonders if she was too slow to recognize her husband’s genius. “I kept telling him to stop bragging,” she says.

At the time of his death in 2008, he and Beverley had been married for 60 years, and he was the wealthiest man in Utah, according to Forbes magazine, which estimated his wealth at $4.5 billion. But the big money, says Williamsen, didn’t come till after the children had grown. Before that, there were strict budgets and hand-me-downs.

Beverley Sorenson was the quiet, nurturing parent. But her husband’s strong will rubbed off on her, says her daughter.

Beverley Sorenson’s list of new goals includes starting a program to fight drugs and gangs, and writing a biography of her late husband. But since the mid-1990s, the biggest big thing going on has been her campaign for arts in the schools.

“This needs to be in all the schools, because all children are at risk.”  — Beverley Taylor Sorenson

It’s a passion fueled by two images: her teenage grandson, who had lost interest in school, and the students at Salt Lake’s Lincoln Elementary. At Lincoln, where many of the children come from economically disadvantaged homes and are at risk for poor academic performance, the gutsy principal had wrangled partnerships with Ririe-Woodbury Dance Company and a visual artist-in-residence who helped the students create a 2,000-pound bronze sculpture. Sorenson was impressed that the children were encouraged to be creative and that the halls were lined not with look-alike construction-paper cutouts but with the students’ framed, original art.

“I said, ‘This needs to be in all the schools, because all children are at risk,’ ” says Sorenson.

So she invited a handful of artists to lunch to brainstorm. Soon she was funding a pilot project called Art Works for Kids. In 2002, she convinced the Utah Legislature to fund a five-year, 12-school version. When state coffers dwindled, she paid the bills herself, and she went back to the Legislature in 2008. By then, fewer schools could afford arts specialists, and teachers were bogged down in No Child Left Behind testing.

She took lawmakers on a tour of Salt Lake’s inner-city Jackson Elementary, where every student learns to play the violin, and she and son Jim went to the Legislature with what he now calls their “one-two punch.”

“I delivered the facts, and Mother made an emotional appeal about how important arts are for children,” he says. That year, the Legislature appropriated $15.8 million for arts education for four years in 52 schools, under the new Beverley Taylor Sorenson Arts Learning Program.

When budget shortfalls put arts education funding in jeopardy again, she visited 23 Utah towns to marshal the support of parents and educators. The program is now in 57 Utah elementary schools; Sorenson’s goal is all 562.

Scores of studies nationwide detail the ways in which arts programs positively impact students’ lives: better school attendance and test scores, lowered dropout rates and drug use, increased creativity and critical thinking skills. The newest buzzword is “integration,” the idea that art can perhaps best serve students if it’s woven seamlessly into every aspect of learning.

McIntyre-Martinez is planning and development coordinator of the Center for Integrating Arts Into Academic Learning, guided jointly by the U’s colleges of Education and Fine Arts—one of the interdisciplinary programs that will be housed in the Beverley Taylor Sorenson Arts and Education Complex.

The building will also house the Center for Reading and Literacy, the Utah Education Policy Center, the Center for the Advancement of Technology in Education, the Eunice Kennedy Shriver National Center for Community Caring, and the Center for Science and Math Education. And the complex will be the new home of the Virginia Tanner Creative Dance Program.

“There’s a big difference between integrated instruction done well and done at a more simplistic level,” says Michael Sikes of the Arts Education Partnership in Washington, D.C. If the U’s new arts integration center does what it sets out to do, says Sikes, “it will be groundbreaking.” The center will focus on evidence-based research and teacher training and will be a systems-wide approach, involving public schools, several University departments, and policy makers.

In October, Sorenson flew to New York to receive the Eli and Edythe Broad Award for Philanthropy in the Arts from Americans for the Arts, a national nonprofit that focuses on advancing the arts in the United States. It’s a prestigious honor, but Sorenson isn’t one to brag.

Instead, she might draw your attention to a song her daughter wrote. The tune immortalized a canoe trip many years ago when Beverley and Jim had been invited to view progress being made to clean up watershed areas and restore wildlife habitat along the Jordan River. As the other invited dignitaries successfully paddled the river, the Sorensons got stuck in the reeds and then overturned their canoe. Later, Beverley Sorenson told her daughter Gail: “Well, you know your Dad and I: When he zigs, I zag.”

The chorus of “The Zig Zag Rag” goes like this:

Oh, Jim and Bev, they zig and they zag
Like divine syncopation or a Scott Joplin rag.
They’re different, as different as night is to day,
But each needs the other in the very same way.

Beverley and Jim were sopping wet as they sat at the governor’s Jordan River dinner that evening. It still makes her smile, thinking of it.

— Elaine Jarvik is a freelance writer and playwright based in Salt Lake City.

One thought on “A Quiet Force”