The University of Utah Emeritus Alumni Board selected five exemplary alumni to be honored with its 2011 Merit of Honor Awards. The annual awards recognize U alumni who graduated 40 or more years ago and whose careers have been marked by outstanding service to the University, their professions, and their communities.

Ingham was the owner/operator of American Icon Products Co. and a sales representative for Midwest of Cannon Falls, Arthur Court Designs, and Compendium
for more than 25 years. She was chair of the Health Sciences Educational Resource Development Council and now serves on its board and on the Fine Arts Advisory Board for the Huntsman Cancer Institute, the Pharmacy Ambassadors Advisory Council, and the Kingsbury Hall Board.

Jarman has long promoted quality education and equality and has been active in government service. As a member of the Utah House of Representatives, she served as a member of the Women’s Political Caucus and chair of the Committee to Study Discrimination in Utah’s Laws. She later became chair of the Utah Housing Finance Agency Board of Directors, and she was the first woman executive director of the Utah Department of Community Affairs. She was also director of Arizona’s Department of Commerce. She is currently president and CEO with The Farsight Group, a consulting company that works with executives and boards to create innovations and design organizational change strategies.

King has long been active in national government administration, working with members of Congress since 1984, most recently as director of InterParliamentary Affairs for the U.S. House of Representatives from 2007 to 2010. She then became a principal of The Podesta Group, a Washington, D.C.-based lobbying and public relations firm. She previously served as Democratic Senior Policy Advisor for the House Committee on Foreign Affairs.

Korologos’s career includes 25 years as sports writer, columnist, editor, and newsroom executive for The Salt Lake Tribune; 30 years as a regional correspondent for Skiing magazine; 14 years with Evans Advertising; and 10 with Reuters News Service. He served as communications director for the Bid and Organizing committees of the 2002 Winter Olympics and is now a public-relations consultant for RIESTER. Korologos is immediate past chair of the J. Willard Marriott Library National Advisory Board and is a member of the library’s Ski Archives Advisory Board. He also serves as a member of the president’s cabinet for the U’s “Together We Reach” campaign.

Wilson served as mayor of Salt Lake City from 1976 to 1985. He was the director of the U’s Hinckley Institute of Politics for 18 years and was the founding director of the Tanner Center for Nonviolent Human Rights Advocacy. He founded Exoro Co. and currently serves as director of government affairs for Talisker Corp. A professor emeritus of political science, he continues to teach classes at the U and is a member of the College of Social and Behavioral Science Advisory Board. 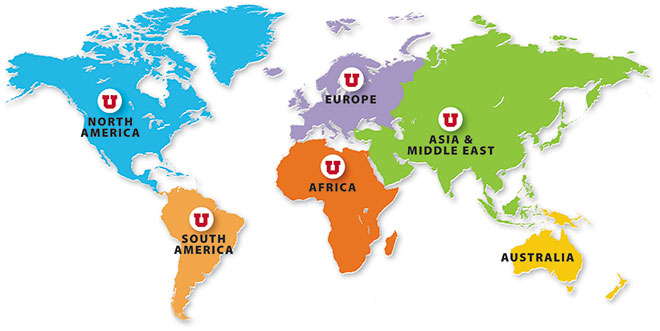 University of Utah alumni now have a network of fellow graduates in many countries around the world. Twenty-one alumni from 18 countries, plus alumni club officers in three more nations, have agreed to serve as international alumni contacts.

In addition, University of Utah graduates who are officers of alumni clubs in China, Europe, India, and Taiwan serve as U liaisons in their home countries.

These international contacts help by:

Most of the new members of the University of Utah Alumni Association’s Board of Directors attended the annual Fall Football Social in September at the Alumni House. They are, from left, Julie Barrett BA’70, Lewis Dickman BS’75, Lindsey Ferrari BA’87, Vicki Mortensen BS’72, and Craig Stagg BSN’83. 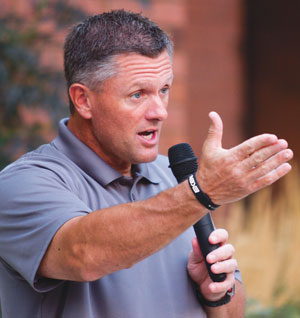 With the University of Utah Marching Band playing, about 200 U alumni, students, and staff members sat down for a casual dinner Sept. 6 at the annual Fall Football Social on the Alumni House patio, waiting for the opportunity to hear U Head Football Coach Kyle Whittingham speak about Utah’s debut season in the Pac-12.

The attendees included many of the new members of the U Alumni Association’s Board of Directors: Julie Barrett BA’70, Lewis Dickman BS’75, Lindsey Ferrari BA’87, Vicki Mortensen BS’72, and Craig Stagg BSN’83. (New directors Jeff Cardon BS’80 and Tom Cloward BA’87 were unable to be there.)

Whittingham, accompanied by quarterback Jordan Wynn and linebacker Chaz Walker, spoke briefly about Utah’s strategies heading into their first Pac-12 game, against the University of Southern California, in Los Angeles. (The Utes went on to lose that one, 23-14, and then trounced BYU the following week, 54-10.)

The coach also noted that the U’s entry into the Pac-12 this year has already started to boost recruiting for the University’s football team. “We felt that spike in recruiting right away,” he said. “Recruiting has gone up, and it’s got to go up, because everyone in the Pac-12 is a little bit bigger, a little bit faster, a little bit stronger than what we’ve been facing in the last years, and so we have to subsequently recruit at a high level to keep pace with that.” 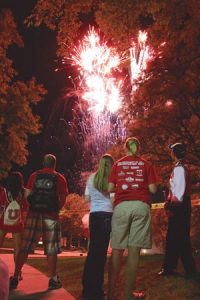 The University of Utah Alumni Association’s fundraising events during Homecoming Week generated nearly $50,000 for U scholarships for deserving students.

Homecoming Week began Saturday, Sept. 24, when scores of volunteers turned out to participate in the Legacy of Lowell Community Service Day. The following Tuesday, campus groups decorated their areas to reflect this year’s Homecoming theme, “Pac to the Future.” The U’s emeritus alumni—those who graduated 40 or more years ago—gathered for their Homecoming reunion Tuesday evening, with a dinner and exhibit tour of “LeConte Stewart: Depression Era Art” at the Utah Museum of Fine Arts.

Fraternity and sorority members competed in song and dance at Songfest on Thursday, and that was followed by a pep rally at the Union Building. Friday began with the U Alumni Association hosting the Homecoming Scholarship Scramble, a golf tournament at Bonneville Golf Course. The golf tournament netted about $20,000 for U scholarships.

Friday night, students gathered for the annual Homecoming dance, held at The Depot at The Gateway shopping center in Salt Lake City.

The Young Alumni 5K and Kids 1K Fun Run on Saturday morning, Oct. 1, raised about $30,000 for U scholarships. The crowds headed in the direction of Rice-Eccles Stadium in the afternoon for the Alumni Association’s pre-game tailgate party on Guardsman Way and then watched the Utes play the Washington Huskies in the U’s first home game in the Pac-12. 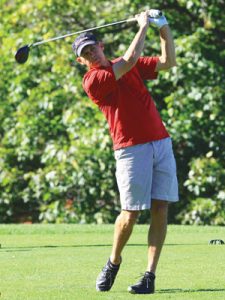 Alumni Board President Keven Rowe competes in the golf tournament. 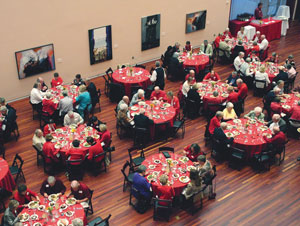 Emeritus alumni eat dinner at their reunion at the Utah Museum of Fine Arts. 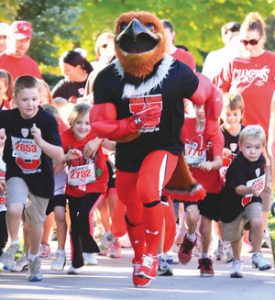 Swoop leads the pack in the Kids 1K Fun Run.