When Teresa Jordan was 6 or 7 years old, friends of her family took her swimming, and she remembers watching the father play with his three kids in the water, helping them climb up onto the side of the pool and then opening his arms so they could jump to him. They were splashing and laughing and having a great time, and she felt a longing so intense, it still takes her breath away.

Her own father didn’t swim and didn’t play. He was a big, stern man, and on the ranch where they lived, he taught Jordan how to shift her weight when training a horse to rein, how to double clutch the stock truck, and how to hog-tie a calf. From as far back as she can remember, he told her she could do anything she put her mind to. But he was not an affectionate father, and in that moment at the pool, she realized how much she wanted one.

Jordan BA’02 uses this memory to introduce an essay on envy in her new book The Year of Living Virtuously (Weekends Off). Author of four other books, she had been away from writing for several years involved in what she calls “a midlife expansion”—studying visual art at the University of Utah. After receiving a bachelor’s degree in fine arts, with an emphasis in painting and drawing, she was looking for a project to get her back to the written word. When she came across Benjamin Franklin’s autobiography and his experiment to write about 13 different virtues as a way to work toward moral perfection, something clicked and she knew she had found the writing project she was looking for. Her book follows a similar thread, but with a twist: taking weekends off to attend to the Seven Deadly Sins. 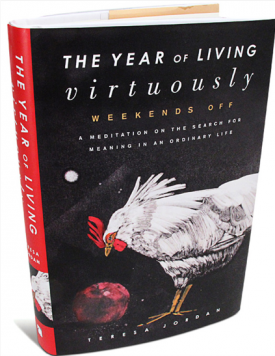 Jordan wondered if Franklin’s centuries-old ideas of virtue could influence a nation today that is struggling with increasingly polarized positions around who’s right. “I wanted to write about extremes—about the angry righteousness that is dividing the country,” Jordan says. “Just look at terrorism. It’s a righteousness taken to the extreme. Anything taken to excess becomes a vice.” Unlike Franklin, she was not using the project to aspire to moral perfection, but rather, “to examine the ordinary strengths and weaknesses that shape the quality of our relationships, to see how virtue and vice play out in ordinary life,” she says. “What interests me is what we talk about over the dinner table.”

The 45 essays in the book go beyond Franklin’s 13 virtues and range from examining courage, listening, and punctuality to pondering grumpiness, procrastination, and stubbornness. She says she realized, only after completing the project, that The Year of Living Virtuously for her was all about the questions: “What was I raised to believe? What do I believe now? To what degree are the decisions I make on a daily basis congruent with my core beliefs? That was the gift of this book.”

The Year of Living Virtuously has drawn praise from national reviewers since its publication in December by Counterpoint Press. In The Wall Street Journal, author Tom Nolan called the book “an engaging and moving collection” and noted, “Teresa Jordan is a writer who aims to stick to resolutions. But like many of us, she has noted more than an occasional disparity between the ideals and values she aspired to in youth and some much less appealing habits of thought and being that have encroached upon her over the years.”

To begin her project, Jordan made a commitment to write one essay on a different virtue or vice each week and post to her blog every Sunday night. Weaving in her own experience with the views of theologians, philosophers, ethicists, evolutionary biologists, and a range of scholars and scientists within the emerging field of consciousness studies, the project involved her skills as a writer, storyteller, researcher—things she already knew how to do and enjoyed.

In doing research for the book, she stayed for a few days at the Trappist monastery in Huntsville, Utah. “I am not Catholic,” she says. “As a child, I did not attend church of any kind, and my adult observance can best be described as Cafeterian, drawing nourishment from many spiritual traditions.” But the abbey provided seclusion for anyone seeking renewal, and during her three days there, as she told KUER’s RadioWest in a recent interview, she realized that “it is a generosity to allow silence.”

In her essay on cleanliness, she writes about her mother, who did not want to be known for her housekeeping. “She was not a slob, but neither was she overly fastidious, a poise that left her time for reading, play, and genuine connection.” Her mother was 5 feet 11 inches tall and often wore four-inch heels, and she taught Jordan to enjoy her height. “My mom wasn’t invested in being a perfect mom, or wife, or friend. She liked her own solitude, and her lack of the need to be perfect gave her space, which made her more fun to be around. She brought balance into what would have been a two-dimensional view of the world,” Jordan writes.

Growing up in the 1950s and ’60s on her great-grandfather’s ranch property in the Iron Mountain country in southeastern Wyoming, Jordan says she “was raised to be Western, which is to say, stoic.” Her parents were devotees of Ayn Rand’s philosophy of objectivism, and she and her brother Blade were surrounded by brandings, roundups, and trail drives. Not surprisingly, many of the book’s essays reflect Jordan’s life on the ranch.

Writing about habit, she recounts how each day “started with the last gesture at night, the thermos of coffee my mother made and took up to her bedside table in preparation for the morning to come. When the alarm rang at 5 a.m. she woke to light a cigarette and drink a cup of coffee in the dark before she dressed quietly and headed downstairs to put the kettle on and let out the dog. When the dog came back in, he bounded upstairs to wake my father, who gave him a biscuit before rising to pull on his jeans, his boots, his snap-fastened shirt… the first motions in the daily habit of my family.” And, Jordan says, the barn was “the heart of it all, the cathedral, the place where the day truly began, a hall you entered with a sacred tone— ‘whoa’—to avoid startling the horses.” 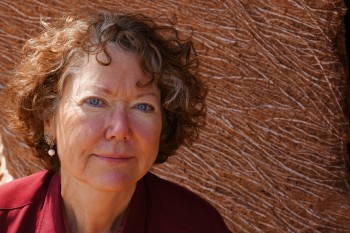 U alum Teresa Jordan is an artist as well as a writer.

In her 1994 memoir, Riding the White Horse Home, Jordan writes that it was perhaps her great-grandmother, Matilda Tait Lannen—Nana—who had the most influence on her as a child. On their long, magical walks together on the land around the ranch, Jordan could count on the two of them discovering fossilized crinoids, snails, clams, and Indian relics—things she didn’t easily find when Nana wasn’t with her. “It is a matter of looking, of learning to see,” writes Jordan, recalling Nana’s words to her. The idea still guides Jordan today. During Jordan’s junior year at Yale University, her mother unexpectedly died of an aneurism and Jordan “felt like the sun had fallen out of the sky.” She returned home and withdrew from school for the rest of the semester. “I couldn’t bear the thought of my father all alone on the ranch 50 miles from town, and the truth is that I was devastated, too,” she says now. She received permission from Yale to do an independent study program from the ranch, and switched from Latin American studies to American history with an emphasis on the American West. Working on her senior thesis—how Wyoming ranchers had responded to the Great Depression—Jordan would drive the pickup every day from the ranch to the archives in Cheyenne, fascinated with the information she found there.

During the 1980s, Jordan continued researching and writing. She wrote the script for the documentary Cowgirls: Portraits of American Ranch Women; conducted several oral history projects; and recorded nearly 100 interviews as background for her first book, Cowgirls: Women of the American West, published in 1992. That same year, she met Hal Cannon.

“Teresa and I met when we were both presenting at a conference in Sun Valley, Idaho,” says Cannon, a musician, folklorist, and public radio producer. “I was married at the time, she was involved with someone, but we recognized each other and kept track.” Years later, when they were both free, they met again at the National Cowboy Poetry Gathering, where Cannon was the founding director. “She gave a keynote address about women and families in the West,” says Cannon. “She convinced me. We fell in love and got married a few months later. That was nearly 25 years ago.” They live near Zion National Park in Virgin, Utah, where they raise a few Navajo- Churro sheep and keep an old pioneer pecan orchard. Among numerous collaborative ventures, Jordan and Cannon created The Open Road, a series of radio features for Public Radio International’s The Savvy Traveler, and continue to partner on many projects. For venues ranging from the National Cowboy Poetry Gathering to the Conference on World Affairs, Jordan has turned many of her Open Road features into stories that she tells live on stage without notes. “Both Teresa and I have a strong inclination to live artistic lives,” says Cannon. “We like to make things happen. Our canvas is the American West: its people, landscape, animals, and music. Wherever we go, we like to bring people together around stories, songs, and imagery.”

In all, Jordan has written or edited seven books about Western rural life and the environment, and she has received numerous literary awards. She has served as writer in residence at the University of Nebraska and the U, and has taught writing throughout the West. Her artwork ranges from notebook sketches, black and white paper cuts, and ink-onpaper portraits to hand-colored monotypes of landscapes and animals, including a surprising number of chickens, one of which graces the cover of the new book. Her work has been exhibited in galleries in Utah, Colorado, and Idaho.

In The Year of Living Virtuously, the theme that emerges most consistently is “the need to create space in which that still, small voice can make itself heard,” she writes. “As I searched for stories with which to understand the various aspects of virtue and vice, I repeatedly encountered the importance of stillness in creating a meaningful life.” She says when she first conceived of the book’s title, she added (Weekends Off) as something of a joke, “to suggest a vacation from the arduous pursuit of decency. Now I realize that weekends off are a more serious concern, for without periodic time for renewal, we forget what we care about.” She notes that the project started as a way to practice writing. “It continues to engage me, long after my self-assignment of weekly reflections has expired, as a way to practice life.”

One thought on “Virtue and Vice”