Jerry Gardner teaches movement at the University of Utah but has an office so tiny he can hardly turn around in it. It’s just half an office, really, and is filled to the brim with masks and books and a pink tank of helium. But sit down and have a conversation with him (you’ll have to wedge a chair between the desk and the room divider), and you’ll soon learn that movement is only part of Gardner’s story.

Across town, at the Tibetan Buddhist Temple he founded with his wife, Jean LaSarre Gardner, Jerry Gardner is also known as Lama Thupten Dorje Gyaltsen. Visit him there, in the spacious yellow room where he teaches Buddhist practice, and you will find a man who can sit still for hours at a time contemplating the nature of awareness.

Movement and stillness: These are the yang and yin of Gardner’s life. 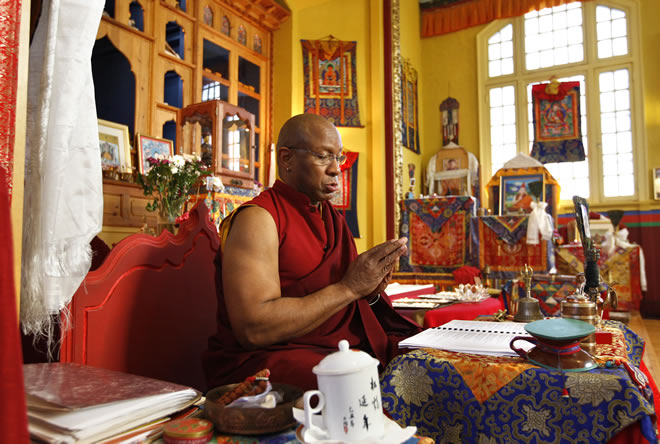 Jerry Gardner leads a group in meditation at the Buddhist temple he founded in Salt Lake City.

Most of his students at the U, where Gardner is an associate professor of theater, are in the Actor Training Program. He teaches them how to do mime, how to work with masks, how to move like ballet dancers, how to perform the stylistic, often disquieting Japanese dance known as butoh. He teaches them how to be at home in their own bodies and the bodies of the characters they portray. At the core of all these lessons is a deeper lesson: “how vital it is to be fully present,” says Jaten McGriff, a senior studying in the program.

“What is the gesture of weariness?” Gardner asks one afternoon as a student practices for an audition. The student has been rehearsing a monologue from William Shakespeare’s Anthony and Cleopatra, in a scene where Domitius Enobarbus has deserted Cleopatra’s army and is near death.

You might think that weariness would be easy to convey, but there is the stereotype of weariness, and there is something subtler. Gardner watches and then offers a suggestion with his own body: He makes a slight movement with his chest, a gentle downward slope of his shoulders, and looks, suddenly, like a man who could convincingly utter the words “O sovereign mistress of melancholy.”

Good actors “learn to see the dishonesty of the body when there is a movement without a justification,” Gardner explains later. “The body has difficulty lying. … To move is to reveal.”

He came to theater from dance, and dance from martial arts, and martial arts from a need to put distance between himself and the ruffians who wanted to beat him up in New York’s Bedford Stuyvesant neighborhood when he was a boy. He is now an imposing, powerful, and confident man. In those days, he was scrawnier but also already had a certain resolve, one that would keep him on a straight, if not a narrow, path. 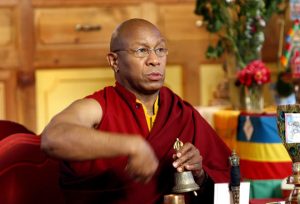 Jerry Gardner rings a bell during a meditation at the Urgyen Samten Ling Gonpa temple.

He was born in Guam, where his father was stationed in the U.S. Army after World War II, but was soon adopted by another couple, Willie and (yes) Willie Gardner of Selma, Alabama. “I came into this world moving,” Gardner says. “I was constantly being moved around.” Eventually, he figured out that “the only constant is yourself.”

Selma in the mid-1960s became famous for its civil rights marches, but when Gardner was a youngster there in the early 1950s, segregation was just a fact of life. He remembers sitting behind the glass barrier that separated blacks and whites at the movies, and hiding under the bed when the Ku Klux Klan burned a cross on his parents’ front lawn. “Willie was my first master,” he says. He is talking about his mother, who taught him how to react to racists. “Your job is to help them understand who you are,” she told him. She also taught him: “Don’t mistake kindness for weakness.”

In the third grade, he was sent to live with an aunt on Long Island, in New York, and in junior high, he moved to Brooklyn. “You either belonged to a gang or you were constantly on the run,” he says of those days. “I figured out if you stayed on the move, they couldn’t pin you down.” He remembers a pivotal moment when he was in junior high school. He was standing at 14th and Canarsie in Manhattan, about to get on a subway, and all of a sudden something said to him, “You can take what’s happened to you in your life and be angry, or you can get on with it.” And then the train doors opened, he says, and he made the decision not to use his life as an excuse.

It was about that same time that he heard about a U.S. Marine Corps sergeant who was teaching martial arts to young boys in Brooklyn. Gardner had already been beaten up a couple of times by then, so he was eager to learn some tricks. He soon discovered that he was good at karate and kung fu, and that he liked leading a disciplined life. He liked learning to move his body precisely, and he liked trying to quiet his mind.

“I walk a straight line not because of you but because of me,” he says now about his former—and present—self. “You can beat my body and sic your dogs on me, but you cannot enslave my mind.”

He studied meditation and martial arts all through high school, in New York and then in Oklahoma, where his parents moved when he was 15, and then in college, first at Cameron University in Oklahoma and then at Staten Island College and Fordham University back in New York. He fought in martial arts tournaments in Madison Square Garden, and once fought blindfolded in a kung fu show on Broadway, a spectacle that also featured a man who ate glass.

To get better at martial arts, Gardner started hanging out with dancers and mimes, studying how they moved their bodies. It was mime that drew him to Salt Lake City in 1980. Greg Goldstein had been a student of Marcel Marceau as well as Nick Johnson, who had studied with the great Polish mime Stefan Niedzialkowski. Gardner came to do a workshop with Goldstein and Johnson. “If you want to be good at something,” Gardner says, “you find a master.”

Gardner has since studied butoh with the co-founder of the form, Kazuo Ohno, in Japan, and with Diego Piñón, who created Butoh Ritual Mexicano, a method that draws from Mexican traditional energetic practices and melds them with Japanese butoh. Gardner has also studied with Tibetan rinpoches and with kung fu masters and qigong masters. He has earned all manner of black belts and sashes. 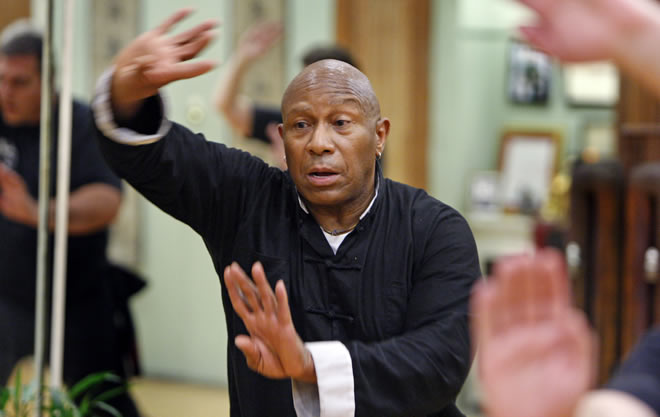 He ended up staying in Salt Lake City to run Goldstein’s mime school, then was hired by the Utah Arts Council to be an artist-in-residence, traveling to schools throughout the state to teach movement. Gardner also spent five years as movement director of Wisconsin’s famed American Players Theatre. In 1996, he was hired by the University of Utah to develop a movement curriculum specifically for actors. “I aspire to learn as much as I can and to be able to transmit teachings in an appropriate way,” says Gardner, his words, as always, measured and deliberate, his voice low and steady.

Those teachings include a recent 12-week qigong class for prostate cancer survivors at the Huntsman Cancer Institute. The randomized clinical trial of 60 men is aimed at determining whether qigong—a Chinese exercise form that looks like t’ai chi in even slower motion—can help improve muscle strength and reduce stress.

Gardner also teaches t’ai chi and wing chun kung fu at Salt Lake’s Red Lotus School of Movement, which he founded with his wife. The school and the Buddhist temple upstairs are housed in a 102-yearold building that originally was built as a Mormon chapel and later was home to an alcohol-free dance club featuring Mormon Goth deejays. The temple, known as Urgyen Samten Ling Gonpa, was established in 1994. Gardner was ordained a lama in 1997, by Khenchen Thupten Ozer and Khenpo Konchok Monlam Rinpoche, after years of rigorous study in Nepal and India.

If you happen to visit the temple on a Monday night—“Advanced Practice and Teaching”—you might meet Sene Noravong, a 60-year-old semiconductor technician who emigrated from Laos to the United States 30 years ago. Noravong studied with other Buddhist teachers before finding the teacher he knows as Lama Thupten. “Other teachers are …,” Noravong begins, and then, not quite sure of the right word, makes a so-so, namby-pamby gesture with his hands. But Lama Thupten is different, he says. “This lama is strong. He inspires me.”

Soon there are a dozen other practitioners gathered at the back of the room, each of them dressed in long maroon wraps. When Gardner enters, his students bow. Gardner does a series of prostrations and then takes his seat at a low table. For the next three hours, the students sit and listen, sit and chant, ask questions, chant some more. Underneath their voices is Gardner’s, as deep as a didgeridoo. As the evening wears on, he talks to them about the dreamlike quality of the unawakened life, the essence of emptiness, the challenge of being a person who can be aware while at the same time not lingering in that awareness.

Gardner’s path in studying those concepts included receiving a doctorate in Buddhist studies, with an emphasis on ritual and meditation, from the Ngagyur Samten Chockhorling Institute in Himachal Pradesh, India. This past summer, he traveled to Nepal, where he met up with some of his advanced meditation students from Utah and then went on to India, where he studied with one of his current teachers, Lama Dawa Rinpoche, at an intense nine-day, one-on-one retreat.

Back at the temple in Salt Lake City, Gardner tells his students as they sit cross-legged in front of him that their practice is not about effort. “Movement,” Gardner sometimes says, “is a tool to arrive at the intrinsic nature of the human being.” But so is sitting. At the front of the room, Gardner’s back is straight. He is hardly moving at all.

After a childhood and adolescence he characterizes as chaotic, it was the ritual and discipline of Tibetan Buddhism that appealed to him when, at age 22, he met Lama Kazi, the teacher who would direct his spiritual path and initiate his formal training.

“Ritual brings about order, and that gives us direction,” Gardner says. “It’s essential for our survival. Otherwise, we live in randomness. But if we create an environment of order, people can be themselves. … And even if you fall down the rabbit hole, you can pull yourself up.”

There is order in qigong, in Japanese butoh and Tibetan Buddhism, and in the guided meditation he teaches his acting students. Actor Training Program senior McGriff explains Gardner’s technique as leading the young actors to angry or joyous or dark places—essences that later on can be tapped into on stage in a controlled way, perhaps as Shakespeare’s Romeo.

“You wouldn’t want to visit your lover’s death on stage every night unless you know you can control your emotions,” McGriff explains. Gardner, he says, “helps us find those places, use them, and then walk away.”

5 thoughts on “The Way of Motion”