JOSHUA SCHIFFMAN IS A LOVER OF ALL THINGS ELEPHANT. As a pediatric oncologist and a professor in the University of Utah’s Department of Pediatrics, he and his exceptional team from Primary Children’s Hospital, Huntsman Cancer Institute, and the University of Utah are working to expand the focus of childhood cancer research to include prevention— and elephants have become important partners in that work. Curious, we sat down with Dr. Schiffman to find out more.

CONTINUUM: Why are you and your research team turning your focus toward cancer risk prevention, and what do elephants have to do with it?

SCHIFFMAN: Cancer researchers have done a great job providing cures for cancer, but it’s still the leading cause of disease-related death in children. Childhood leukemia used to be a death sentence. Now the cure rate is over 90 percent—which is fantastic! But there is much more we need to do.

Medications are toxic, care is extremely expensive, and there seems to be an increase in the incidence of leukemia and brain tumors, and we aren’t quite sure why. Of the 350,000 childhood cancer survivors in the U.S. today, most of them have chronic disease—heart problems, pulmonary problems, hearing problems—all related to the treatment we give them.

While medical research shows that up to one in three childhood cancers may be caused by genetic risk, there has been little action by medical research in cancer prevention. By the time symptoms appear, it’s often too late. If we can find the cancer before symptoms are present, we have a much better shot at a good outcome—100 percent versus 20 percent survival in some situations. Cancer prevention is most important, and we are discovering that the p53 gene in elephants may play a pivotal role in it. 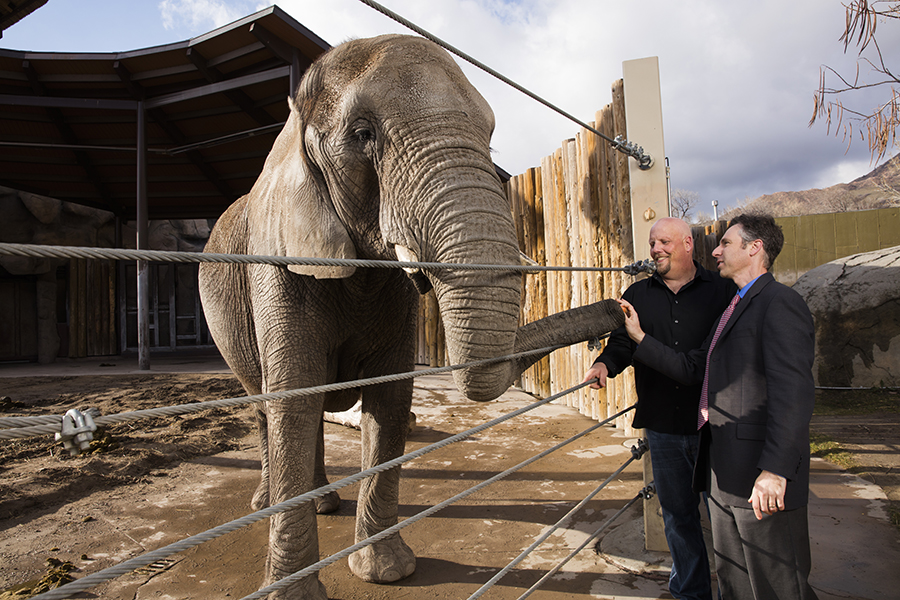 CONTINUUM: What is the p53 gene, and how does it help prevent cancer?

SCHIFFMAN: P53, also known as TP53, regulates the cell cycle and cell death, so it functions as a tumor suppressor. P53 is one of the most important genes to protect people from cancer. It’s called the Guardian of the Genome in the peer-reviewed literature and behaves much like a superhero. If there is DNA damage to a cell, p53 shows up on the scene to stop the cell from dividing and to help coordinate repair, or sometimes even to kill the cell. If p53 doesn’t work because it is missing or mutated, then the cell accumulates massive amounts of DNA mutations, keeps dividing, never dies, and that’s cancer. That’s why p53 is so important.

Most people have two copies of p53—one from mom, one from dad. However, it turns out that people with Li-Fraumeni syndrome, or LFS, have a hereditary genetic condition with just one working p53 gene in all the cells in their body. They also have more than a 90 percent lifetime risk of cancer—along with their affected family members. Over half the time, LFS cancers occur at a very young age, including childhood. The lack of a working p53 gene in patients with LFS is responsible for their extremely high rate of cancer.

But p53 is also very important in people without LFS. In fact, the p53 gene is broken in at least half of all human tumors, leading to initial tumor development. There is also evidence that p53 stops working as we age, an observation that correlates with increased cancer risk in the aging population. Without our p53 superhero, it is difficult to prevent the development of cancer.

CONTINUUM: Was there an “aha” moment when you first realized the potential of elephant genes for the future of cancer research?

SCHIFFMAN: Yes. A few years ago, I attended a medical conference to learn why we develop cancer. Carlo Maley, a biologist and associate professor at the Biodesign Institute in the School of Life Sciences at Arizona State University, gave a presentation, and it changed my life forever. He talked about something called Peto’s Paradox, the observation that cancer occurrence does not correlate with the number of cells or lifespan of an organism.

For instance, the rate of cancer in elephants is much lower than cancer in humans despite the fact that an elephant has 100 times more cells than a human, and elephant cells continue to divide over and over again throughout the 60- to 70-year lifespan of an elephant. Half of all men and a third of all women will develop cancer in their lifetime, but less than 5 percent of elephants appear to develop cancer. And that’s the paradox. With elephants having so many dividing cells for so long, but so little cancer, it’s clear that they must have developed a genetic mechanism for cancer resistance.

CONTINUUM: How did you connect the dots between elephant and human cancer resistance and the number of copies of p53?

SCHIFFMAN: At the conference, Dr. Maley reported that when he looked at the genome of African elephants, his team discovered that elephants have 40 copies of p53. I nearly fell out of my seat when I heard that. Dr. Maley said they couldn’t find any other animals with that many copies of p53, and although he didn’t know for certain, this might be the reason why elephants are so resistant to cancer.

After his presentation, I introduced myself to Dr. Maley and told him about my lab at Huntsman Cancer Institute at the University of Utah and about Primary Children’s Hospital, where we’re taking care of children with LFS, collecting their cells, trying to understand why their cells are more susceptible to cancer. “You just said that elephants have 40 copies of p53 and almost never get cancer. Our patients only have one copy of p53 and always get cancer,” I said. “What if somehow we could get elephant blood and test it next to the blood from our patients with Li-Fraumeni syndrome to try to determine for sure why elephants don’t get cancer?” Dr. Maley was very excited by this idea and asked me how I was ever going to get elephant blood, and I said, “I have no idea.” He said, “Well, give me a call if you find out.”

CONTINUUM: How did you get the elephant blood, and how do you go about studying it?

SCHIFFMAN: A few weeks later, my kids and I were visiting Utah’s Hogle Zoo. We arrived just as the daily elephant show was starting and sat down on the steps to watch. Out stepped Eric Peterson, the elephant keeper. “These are our African elephants,” Eric explained. “You can tell they are African elephants because of their big ears. They have big veins on the back of their ears to circulate the blood. That’s how they stay cool.” And then, and I swear it’s true, he said, “Did you know that once a week here at the Hogle Zoo we draw blood from the elephants to make sure they’re healthy?” That was it! A light bulb went off. 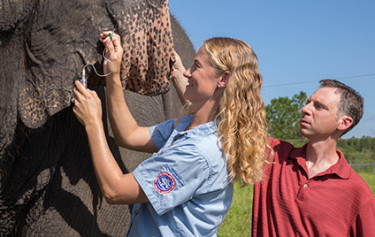 Schiffman watches as veterinarian Ashley Settles takes a blood sample from one of the herd at the Ringling Bros. Center for Elephant Conservation. (Photo courtesy Ringling Bros.)

The show ended, and Eric thanked everyone for coming and then invited anyone with questions to find him upfront. I immediately headed to Eric to ask my question. After introducing myself, I simply asked, “How can I get some elephant blood?” Eric explained the process of submitting an application to the zoo’s scientific review committee. After months of paperwork, we received permission for Eric and his team to collect extra blood for our research while doing their weekly blood draw. Since that day, the fantastic people in my lab take a weekly trip to the Hogle Zoo to pick up the elephant blood— still warm—to bring back to the lab to study.

From there, our team sorts the elephant white blood cells and intentionally treats the cells to cause DNA damage, which you can think of as pre-cancer. We were excited to learn that many of the elephant cells self-destructed with their extra copies of p53, whereas half as many human cells died despite their DNA damage, and hardly any cells from LFS patients died. Based on this and other laboratory experiments, we believe that these extra p53 copies in elephants may help to protect them from cancer.

CONTINUUM: We understand you’ve now partnered with Ringling Bros. to study other species of elephants as well. Could you tell us about that?

SCHIFFMAN: In addition to the African elephants at Utah’s Hogle Zoo, we have been working with the Asian elephants from Ringling Bros. and Barnum & Bailey Circus. It turns out that Ringling Bros. has a Center for Elephant Conservation and owns the largest herd of elephants in the Western Hemisphere. Similar to what we do with the zoo, we study blood that is already being collected for regular care of the elephants.

We have learned that Asian elephants also have multiple copies of the p53 gene that help to promote a very robust cell death when DNA damage is present. This entire project has been an absolutely amazing partnership between Ringling Bros. Center for Elephant Conservation, Utah’s Hogle Zoo, Primary Children’s Hospital, and our lab at Huntsman Cancer Institute.

CONTINUUM: What are your studies showing? Any surprises? And what’s next?

So although the p53 in elephants wasn’t repairing cells quickly, it was killing the cell quickly so it could no longer divide—much more efficient. We thought to ourselves, evolution has done it again! Taking a step back, this makes perfect sense. If you want to prevent cancer, this is the way to do it, kill the cell before it can ever go on to become cancer. We are now working to insert p53 from elephants into human cancer cells to see if there is any effect and to find out if there is a way we can translate these laboratory findings into clinical medicine. With enough research, support, and effort, we hope that the first clinical trials could begin within the next three to five years.

THE RESULTS OF THE RESEARCH by Schiffman and his team were published in the October 2015 issue of the Journal of the American Medical Association (JAMA) and were met with phenomenal interest. The article was ranked as the No.2 most popular story in JAMA for 2015 and was named one of the top 100 science articles around the world for 2015. It also made the cover of Newsweek and has generated more than 20,000 individual news stories to date.

2 thoughts on “Partners to Prevent Cancer”