It was always a good idea. Throw an evening concert in the garden… what’s not to like? Back in 1987, Red Butte Garden was merely a quaint garden in the foothills of the Wasatch Front: a nice green place with a small—well, even calling it an “amphitheater” seems too grand—a small stage and place on the lawn to watch this or that local acoustic group strum through some folksy tunes as the sun set. That’s all it was back then. A blip on your weekly schedule. A pleasant place to wind down the weekend and prepare for the work week ahead.

Still, it was a good idea, right? Nothing to argue with there. But how did that modest idea—a cute little darling teacup of a notion—become the great idea, the huge idea, the idea that made the Red Butte Concert Series an honest to goodness cultural phenomenon, a key thread in the tapestry of living life well here in Salt Lake City? A juggernaut of a fundraising effort that supports a thriving horticultural paradise offering education and family fun, and preserving critical green space as the city grows? How’d that all come to be?

It started, quietly and unremarkably, with what would turn out to be a remarkably prophetic statement from the garden’s founder, Zeke Dumke, Jr. 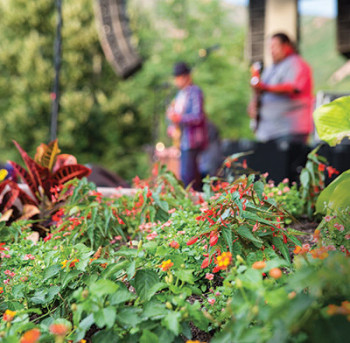 It was in 1986, to be precise, that we discover the earliest whispers. Buried deep down in the mundane minutes of an otherwise routine meeting of the garden’s development committee, is one very special remark, one line of dutifully recorded text captured from the mouth of Dumke, who said he thought an amphitheater for concerts would be important for the garden’s future financial stability.

Prophecy, it turns out, isn’t always a big showy thing, with burning bushes and whatnot.

And lo, the concert series in the garden began the following year, with four Sunday shows called the “Second Sunday Concerts,” featuring local acts—Jerry Floor and Bill Crismon’s Big Band, the Jarman/Kingston Quartet, the Jensen-Woodbury duo, and the Rick Martinez Band. Tickets were $3, or you could buy the season for $10.

The shows just kind of hummed along quietly awhile under the guidance of Red Butte’s Development Director Susan Kropf, who came on in 1989. But in 1997 she hired Chris Mautz as a helper—well, technically a “Development Specialist at a dynamic cultural organization,” which is how the want ad read.

“I was just this young guy coming up,” says Mautz, now Red Butte Garden’s booking manager. “Susan shared Zeke’s vision and recognized that the concerts could be a good way to introduce the garden to people who weren’t necessarily into botanical gardens or gardening and maybe drive up membership sales. And me, I didn’t know any better, so we went that way.”

It was at this point that Mautz and Kropf began what can be called the “proto-Red Butte Concert Series.” In this form, the characteristics remained the same from the earliest, “ur” shows. They were still relatively small, and only on Sunday nights, but the formula was altered to include bigger, nationally known names “of a certain folksy, culturally valid heritage style,” Mautz says.

They continued to fill the bills with a lot of folk, bluegrass, some jazz and blues, but nothing that seemed jarring to the original low-key vision—a nice night, in a garden, with pleasant music. Lineups included the likes of John Prine (1997), B.B. King (1998), and Mary Chapin Carpenter (1999), and in 2000, the show count jumped to nine.

“We were selling out, and we proved that we could do it, that people would come out for nationally known acts,” says Mautz, who still books Red Butte’s season and is also co-owner of two other venues, Salt Lake’s State Room and Park City’s O.P. Rockwell. (Kropf recently retired as director of development at KUER.)

In 2001, Derrek Hanson BS’99 MPA’07—who would eventually become the Butch Cassidy to Mautz’s Sundance Kid—started working at Red Butte as a temporary employee helping out with customer service. “I had a job I didn’t like at a company that was moving to San Diego, and I didn’t want to go,” Hanson says. “I started looking around. I’m a music fan, so I figured this was a good direction.”

In 2003, the garden featured 11 artists and, famously, an appearance by the then-relatively unknown singer Norah Jones, whose eponymous album that year became one of the all-time best-selling records ever. Mautz, who had departed in 2001 to work out of state, was rehired to book and produce the garden’s concerts in 2007, by which time Hanson had become the garden’s events director. Today, the two work closely deciding the annual lineup and booking the acts. They have helped steer the shows during a period of massive growth over the last decade. And they far surpassed the hope that the concerts would provide the financial backbone for the garden that Zeke Dumke presciently voiced in 1986.

“Every single year since 2008, when we opened the new amphitheater, we have sold more tickets per show, on average, than the previous year,” says Red Butte Garden Executive Director Greg Lee, who came onboard in 2003. “It’s how we pay the bills. It has enabled us to expand our children’s and family programming, and the hours we are open to the public, and to build and maintain new gardens and facilities.” 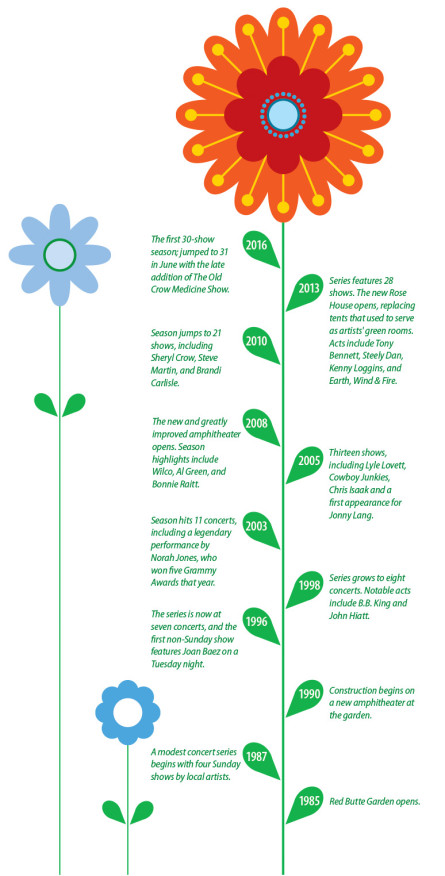 A lot has changed in the 10 years since Hanson started doing shows. “It was so different back then,” he says. “We were still working on a temporary stage that we’d set up and take down every year. We didn’t have a real backstage area for the bands. We just had a nook in the bushes that we’d run a curtain in front of where the bands would wait to go on.”

Indeed, in the early 2000s, Red Butte’s setup was pretty much ad hoc—tents and portable facilities— but in 2006, the popularity of the concerts enabled the garden to convince the University and the Bureau of Land Management to move a portion of Red Butte Canyon Road to create space for a larger and better concert venue. That prompted a capital fundraising campaign, led by a Dumke family gift, for the expansion and upgrading of the amphitheater, including a standardized stage, dressing rooms, state-of-the-art sound and lighting gear, and permanent restrooms. The amphitheater was completely regraded and the stage relocated to improve sightlines and make sure that there wasn’t a bad seat in the house. The new and improved venue debuted in 2008 with 12 concerts.

But while the production and the facilities were evolving and changing, the ticket systems were back in the Stone Age. Longtime Red Butte concert fans will remember the byzantine mailing and faxing of forms.

“We had this old Grateful Dead mail-order model that we used for our members to buy tickets,” Hanson chuckles. “They would request their tickets by mail or fax, and we would sit there manually typing in credit card numbers and processing tickets. It was painful.”

These days, the much-improved system is automated, and the box office and will-call areas are permanent buildings instead of tables and tents. “You know little things like that make a big difference for the audiences, and our staff and volunteers,” Hanson says. 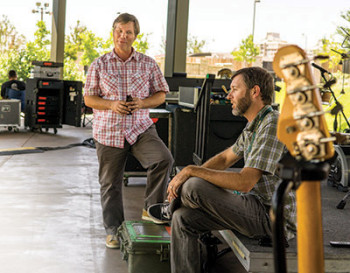 For the 2016 summer season, there were 31 shows on the Red Butte lineup, half of which sold out within days of tickets going on sale. The series is a bona fide part of life in Salt Lake City, the show announcements are events in themselves, and, because garden members get first crack at tickets as a benefit, membership sales are through the roof. Summer in Salt Lake simply must include one or two evenings at Red Butte.

However, making this many shows happen over the summer means, as Lee puts it, “Our summers are frenetic, and staff can get run ragged. But it has enabled the garden to grow our programs and facilities. We couldn’t, for example, afford to maintain our new Rose and Water Conservation gardens without the additional concerts. And we get to spend the summer throwing 31 parties for 3,000 of our friends.”

A show day starts when the band’s advance crew shows up—which could be any time the morning of the show, sometimes perhaps even the night before—and ends when they load up the last of their gear and drive on to the next show, usually well after midnight. “We start by handing them [advance crews] a cup of coffee and showing them around,” Hanson says. “We end by waving at the back of their bus. It’s a long day, sure, but there are worse things to be doing.” 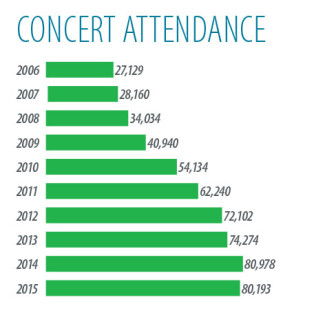 Meanwhile, the Red Butte crew—a suite of professional technicians and volunteers—are scurrying around, working with the band’s team, setting lights, sound and, well, everything. The concert crew and volunteers are getting the venue ready, sorting tickets, preparing for the onslaught. About the only time anyone relaxes, Mautz and Hanson add, is during the show. “There’s a point when it’s finally on the band and we can relax for a second or two,” Hanson says.

And even after a full season of 14-hour days, the show keeps chugging. The new season’s planning begins as the last band’s bus pulls out of the garden. “When the season ends, we look at our hit list,” Hanson says. “We have a list of bands Chris and I have dreamed of having play here, fan favorites, and just bands we think would be a good fit. There’s no science to it. We will start to put out feelers, talk to agents, and start getting a few dates tossed around.” This process, Mautz says, runs all the way up until the season announcements in April.

“We are constantly refining the lineup, but so often it just comes together: something will fall through, or something we are missing will show up,” he says. “We try to be cool and just let things unfold.” As the series has expanded, Mautz says they’ve been able to take more risks and just ask, “Would that be a cool show at the garden?”

And gone are the days when they felt like they had to go begging for the lineup. Hanson says bands often call them, and this, in a way, is how the series has grown and added concerts over the years.

“Well, it was a little bit of an accident,” Hanson says. “Before the amphitheater remodel, we’d put out 17 offers and think we’d get back maybe 12, but after word got out about our new venue they started to all come back and say ‘Yes.’ Suddenly we had 17 concerts confirmed and we said, ‘Uh-oh. Can we do 17 shows? Can we sell enough tickets?’ ”

At 31 shows and counting, the answer is clearly “yes,” and 30 years after Zeke Dumke first brought it up, there is no sign that concerts in the garden are any less of a good idea.

—Jeremy Pugh is a local freelance writer and the author of 100 Things to Do in Salt Lake City Before You Die, which includes the advice to catch a Red Butte Garden concert.

One thought on “Music in the Mountains”