It goes without saying that David L. Strayer never uses a cell phone while driving. Not even a hands-free one. And you won’t find him talking to Siri or a newer car’s voice-command center to navigate the best route, not even at stop lights.

As a cognitive neuroscientist, he’s been researching distracted driving for nearly two decades at the University of Utah’s Applied Cognition Lab. During that time, study participants have driven enough miles in a simulator and on Salt Lake City streets to go around the world 15 times while researchers have tracked their eye movements, response times, and brain activity. The takeaway: “Humans are really bad at multitasking,” Strayer told Continuum. “We think that we’re good at it, but in fact we’re not. It’s causing injuries and fatalities on the roadway all the time.”

National estimates suggest roughly 20,000 people die each year in distracted-driving crashes. That’s equivalent, Strayer noted, to the U’s undergraduate class. “We’re killing people because we’re not taking driving as seriously as we should.”

When Strayer talks, we should listen. He’s widely seen as the country’s leading authority on distracted driving. His work has been named one of the top 100 science stories for two years, and he’s given countless interviews and presentations around the world. More importantly, his work is motivating safer driving policies. Nearly all states ban texting while driving, and most have outlawed all cell phone use by new drivers.

Since the late 1990s, Strayer and his colleagues have built a case against talking and driving, texting and driving, and, most recently, against the ways vehicles have become extensions of our smartphones. New cars are built with software that connects to smartphones, along with built-in infotainment systems that enable calling, texting, and using apps.

Since 2011, Strayer’s team has worked with the AAA Foundation for Traffic Safety to create a framework to measure the mental workload drivers are under while interacting with technology. It’s led to rating new cars’ infotainment systems, presenting to the U.S. Congress and key transportation agencies such as the National Highway Traffic Safety Administration, and consulting with car manufacturers to make vehicles safer.

“I don’t think any of this impact would have happened if not for the work that we’ve done with Dave Strayer and the University of Utah,” says Jake Nelson, AAA director of Traffic Safety and Research. “We have fundamentally changed the national debate on driver distraction and vehicle technology to where mental distraction is considered as industry has built its product.”

Much of what you know about the dangers of driving distracted comes from the U’s lab. Here are the top takeaways:

One of Strayer’s first cell phone studies, in 2001, sought to clarify if cell use interferes with driving and if so, how? He found it was the phone conversation itself that was the issue—not the distraction that might arise by fumbling with the phone.

Participants used a joystick to maneuver a cursor on a computer display to keep it aligned to a moving target. The ones who used cell phones had to discuss one of two timely topics of the day: President Bill Clinton’s impeachment or the Salt Lake City Olympic Committee bribery scandal.

Whether they used handheld or hands-free phones, they missed twice as many simulated traffic signals and took longer to react to those signals than the control group, which listened to the radio or a book on tape. That suggested that the slowed response wasn’t from listening to verbal material but was due to actively participating in a phone conversation. 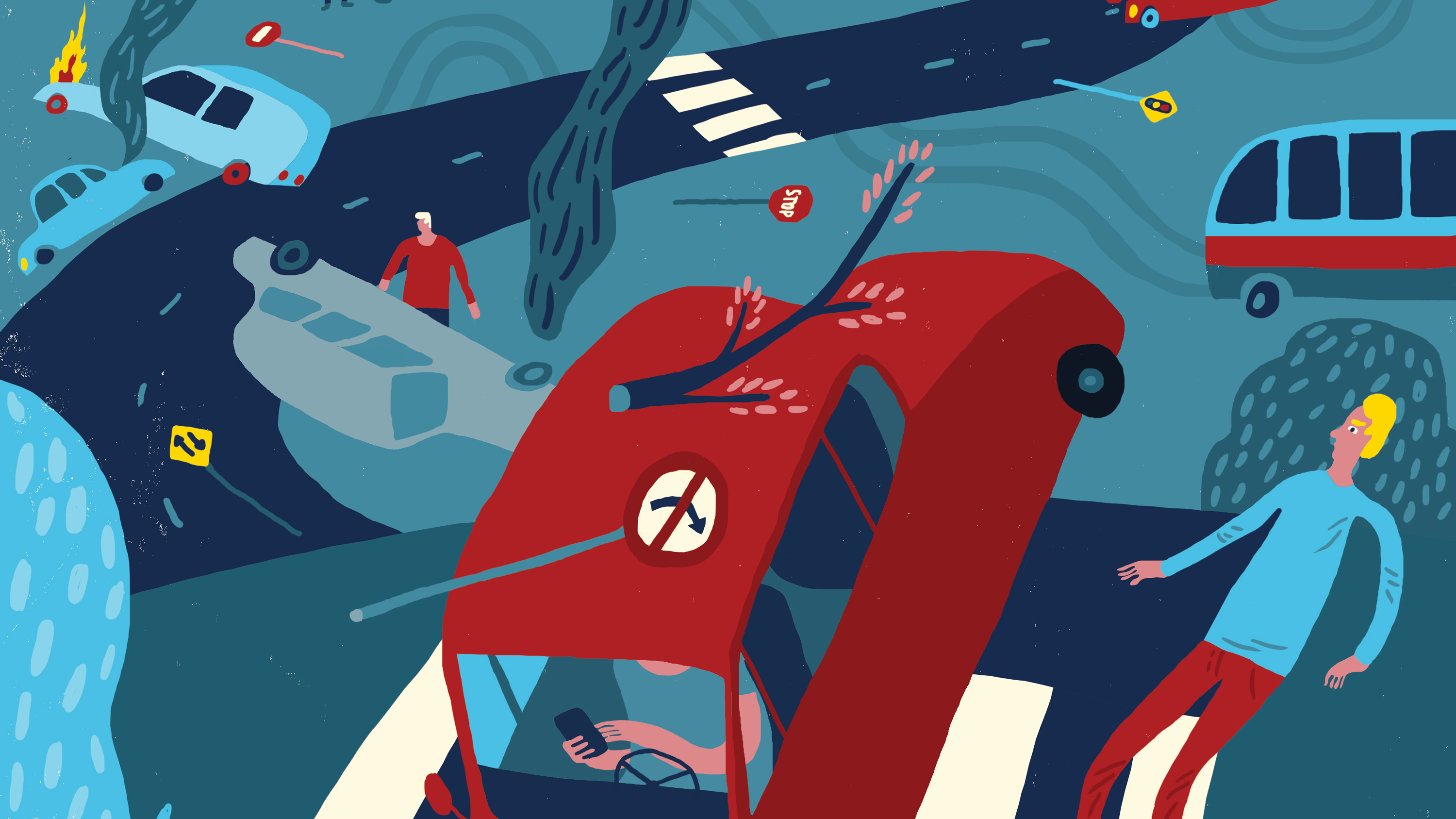 WHAT IT TAKES TO DRIVE SAFELY

Experienced drivers are so used to taking the wheel that they may take for granted just how mentally demanding driving can be. U Professor David Strayer and Donald Fisher, a professor of mechanical and industrial engineering at the University of Massachusetts at Amherst, developed a model that explains the key mental processes that are impaired when drivers are distracted. It’s called SPIDER:

By the early 2000s, study participants were driving in a simulator modeled like a Ford Crown Victoria sedan, surrounded by three screens showing freeway scenes and traffic. Strayer rocketed to fame at that time after one of his simulator studies found that motorists using cell phones are more impaired than drunk drivers. “Literally, my phone didn’t stop ringing for 24 hours,” he says, referring to the media frenzy that ensued.

Using the driving simulator, participants were told to follow a pace car on a freeway. They first simply drove to establish a baseline. Then they drove while on a cell phone and later after drinking enough vodka and orange juice to reach a blood alcohol concentration of 0.08, or the common legal limit for a DUI.

Performance was worse when drivers were on the phone than when the same drivers were drunk. They were involved in more rear-end collisions and took longer to recover the speed they had lost while braking.

WHY YOU CAN’T TALK AND DRIVE

A 2003 Strayer study showed that just because drivers look at road conditions doesn’t mean they see them. Using the driving simulator, participants were asked to follow rules of the road and make right- and left-hand turns when directed. Billboards were interspersed in the scene, and the participants were later tested to see what they recalled. Data from eye-tracking devices showed that the drivers had looked at the signs. But the drivers talking on phones registered up to 50 percent less of the signs. Another study found that the brain activity needed to safely drive a car is suppressed while talking on a phone.

“The brain’s being hijacked by the phone conversation,” Strayer says. “When we’re speaking, our brain is doing a lot of work to organize our thoughts and make sure the words come out in the right order. That brain power that we take for granted interferes with a lot of different things.”

With 68 percent of 2016 survey respondents telling the AAA Foundation for Traffic Safety that they talked on their cell phones while driving, motorists are in denial, Strayer says. “They may think, ‘I was fine, I didn’t have any problems.’ They don’t realize they almost ran through a red light or almost hit somebody. Until an accident happens, they’re kind of clueless, like [the nearsighted cartoon character] Mr. Magoo, driving around and causing all kinds of mayhem.”

TEXTING IS NO BETTER

By 2009, there was little doubt that talking on a cell phone worsens driving. But what about texting?

Driving simulator participants, who were experienced texters and admitted to texting while driving, were told to follow a pace car that intermittently braked as faster cars drove past in a neighboring lane. They used their own cell phones and made plans for the evening via text.

The study suggested that drivers who text didn’t divide their attention between texting and driving, but switched from one to the other. While texting, they more often inadvertently drifted in their lanes, and they reacted a median 30 percent more slowly to the braking pace car. Most alarmingly, the study found that the risk of crashes increased sixfold while texting compared to simply driving.

FIGHT THE URGE TO MULTITASK

You’d think that the drivers most likely to text, talk, or send an email while driving would be the best at it. In fact, they are the worst, according to a 2013 study. Participants ranked their perceived ability to multitask compared to others, how much they used various forms of media at the same time (surfing the web while watching TV, for example), and how often they drove while on their phones. Finally, their actual ability to multitask was taxed via a test in which they had to memorize a series of letters interspersed with math problems.

Most of them thought they were better at multitasking than they actually were. And the ones who were most likely to use their phones while driving were empirically worse at multitasking. “It is great to have research like this to back us up and say, ‘You cannot multitask,’ ” says Brent Wilhite, a representative of the Zero Fatalities campaign in Utah.

Yet short of hiding your cell phone, it can seem almost impossible to resist the lure of the ringing and pinging. Those noises release a burst of the neurotransmitter dopamine, which causes pleasure. “The very primitive parts of the reward circuit of the brain are activated. They take over the decision-making centers that say, ‘I shouldn’t do this,’ ” Strayer says.

He tells of a father he met through his work who lost his 10-year-old son in a distracted driving accident. Even he still wanted to pick up his phone when it rang while he drove. He finally had to eliminate the temptation by locking his phone in the trunk. 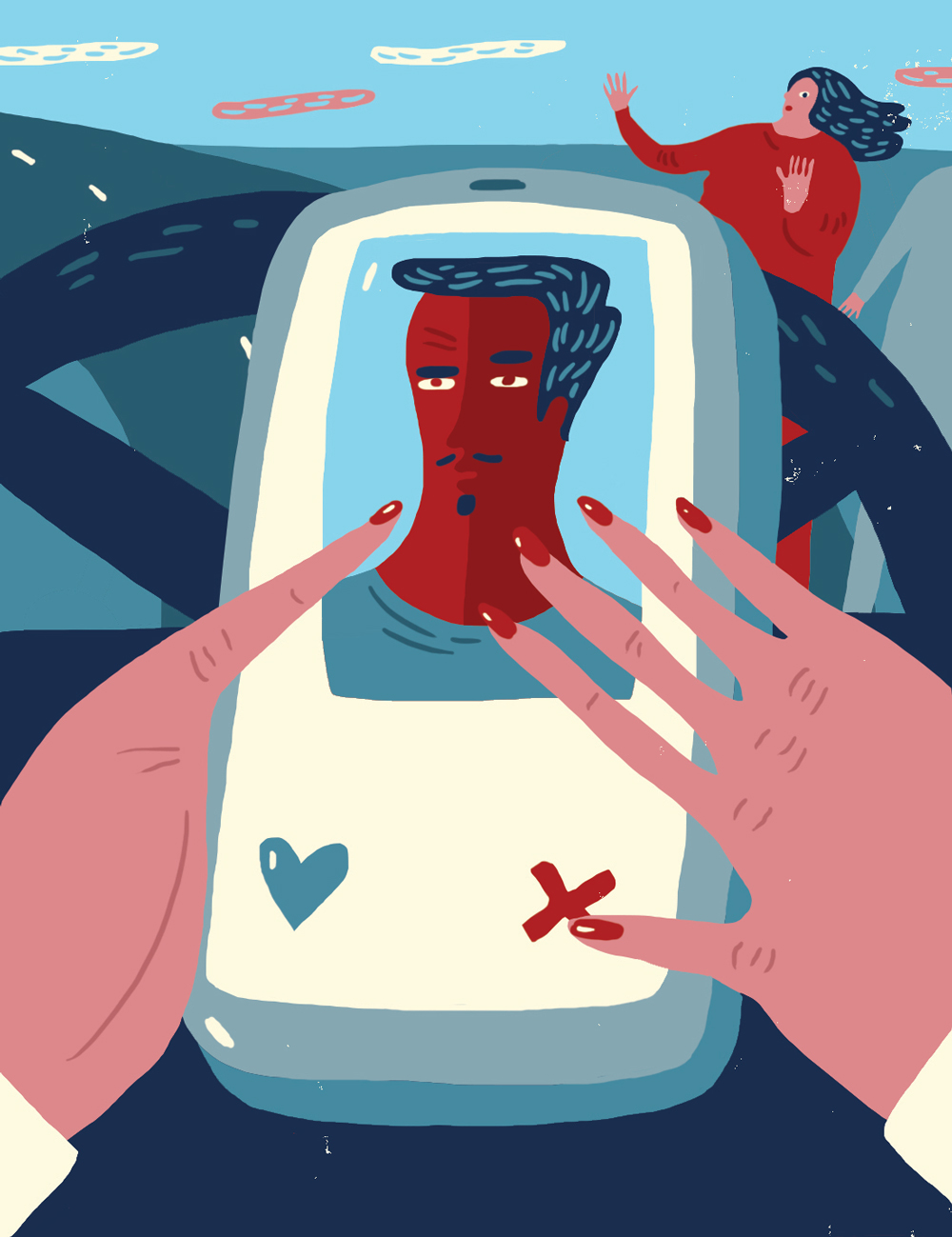 WHAT THE LAW SAYS

No state bans all cell phone use for all drivers, but:

SAY ‘NO’ TO VOICE COMMANDS

You’ve bought a new car meant to keep your eyes on the road and hands on the wheel by giving voice commands to change the radio station, make phone calls, send texts, etc. It must be safe, right? Wrong. Strayer’s most recent research with AAA found that voice-based and touch-screen infotainment systems in new cars are so dangerous (in some cases allowing Facebook posts and web surfing) or unusable (calling Home Depot when you want them to call home), they shouldn’t be used while the car is in motion.

It might take two seconds to change the radio in older cars. In the new ones: 15 seconds. Texting took an average of 30 seconds. Entering a destination in navigation systems took the longest, an average of 40 seconds and sometimes up to several minutes. Other research has shown that it takes just two seconds of visual distraction to double the risk of a crash.

The infotainment systems are most mentally taxing for older drivers, who are more likely to purchase new cars, according to a different Strayer study, which also found that practicing didn’t seem to reduce the difficulty. And Siri and other smartphone assistants aren’t much better. Strayer’s prior research rated Siri as a “very high distraction” when it was asked by drivers to send texts, update Facebook, or modify calendar appointments.

And even waiting until a stop light to use the voice commands isn’t safe: A Strayer study found that it takes up to 27 seconds to regain full attention after issuing voice commands. A driver traveling 25 mph would cover the length of three football fields during that time. “Just because technology allows you to do xyz doesn’t mean you should,” says AAA’s Nelson. “You should focus on the drive, with your hands on the wheel and eyes on the road.”

Still, he knows industry won’t return to providing buttons and knobs, so AAA is using the U research to help car makers build safer and easier-to-use systems. For now, there are no regulations, just voluntary guidelines. AAA recommends that manufacturers lock out navigational programming, text messaging, and social media while the car is moving.

Strayer’s ultimate goal: that regulations will return some “sanity” to the dashboard. For now, the laws are “letting people decide what is safe. People don’t make good judgments about that,” he says.

One thought on “Hang Up and Drive”