In his speech at the Salt Lake Tabernacle, Kennedy used the words “black and white,” but he was not referring to the 200,000 strong March on Washington a month earlier or to the killing of four African American girls attending Sunday school 10 days earlier. Black and white referred to positions on foreign policy. Communism was the threat.

With the Salt Lake metro area only 1.4 percent non-white (Latinos were counted as white), it was easy for many residents to ignore the tumult occurring across the nation. Not so on college campuses. The Daily Utah Chronicle reported regularly on student civil rights activism around the country. One article stated that U student Stephen Holbrook, “active in the Republican Party and the NAACP, ” had participated in the Freedom March on Washington.

Two months after Kennedy’s visit to Utah, he was assassinated. For many, it was the end of innocence.

University of Utah Professor Mark Matheson MA’85, who grew up in Salt Lake City, remembers “watching the aftermath of sorrow on black and white TV. By elementary school, we were writing essays on integration, which sparked a developing interest in the civil rights movement.”

Since Matheson began teaching, after receiving his master’s degree in English from the U and his doctorate from the University of Oxford, he has included Dr. King’s “Letter from Birmingham Jail” in his curriculum.

Matheson now heads up the U’s MUSE Project (My U Signature Experience), which aims to provide undergraduate students with transformative educational opportunities. Each year, the MUSE staff chooses a theme for campuswide discussion, with the centerpiece being a text by a distinguished national guest. MUSE then organizes events including lunchtime lectures, book groups, and student dinners with professors and community leaders. 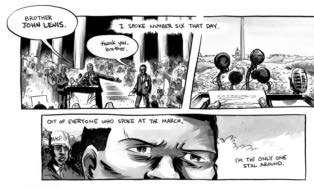 The 2014-15 theme was justice; its book was My Beloved World, by U.S. Supreme Court Justice Sonia Sotomayor. Her visit to campus drew more than 7,000 people from the campus and well beyond. How do you follow that? Matheson learned that an icon in the civil rights movement, U.S. Congressman John Lewis from Georgia, had written a book—a graphic novel inspired by a 1956 comic book telling Martin Luther King, Jr.’s story. Congressman Lewis created March—which became a trilogy of books— with co-author Andrew Aydin and illustrator Nate Powell. Matheson, a humanities professor, saw the graphic novel style as “a fresh genre that students are drawn to and excited about and find accessible.”

The theme was perfect: Community. “At the heart of all Lewis’s activism is the concept of the ‘Beloved Community,’ which implies growth and development and change in every person who works toward that goal,” says Matheson.

Eight U professors incorporated March into their classes for 2015-16, and more than 1,000 students received copies of March: Book One (and in some cases, Book Two) donated by the O.C. Tanner Company. (Book Three comes out this August.)

March provided Matheson the opportunity to teach the role of texts in the civil rights movement. “Dr. King invoked Western cultural traditions—including the Bible, the Declaration of Independence, and the U.S. Constitution—i n the service of a profound message of justice for African Americans,” he says.

Matheson’s prediction that students would connect with March was correct.

“There are some books that just touch you right in the heart…. For me this was that book,” says Said Abdirahman Samatar, a chemical engineering/pre-law major. “It put a spotlight on some topics that I was unaware of.” 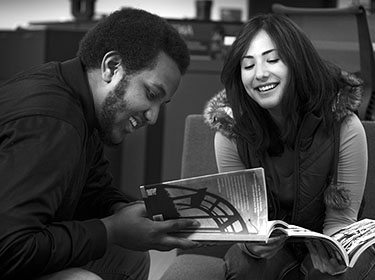 Finance major Jessica Ramirez, who had learned little about civil rights in school, said the book was very informative, yet not intimidating. “It was the perfect way to tell a story of the civil rights movement,” she says. “This book is a good way to get people’s interest, and now those who have read the graphic novel can go and read more about the movement.”

Tyrell Pack, who studies chemical engineering, already had a deep knowledge of the civil rights movement. Still, he found March “very powerful.” Its graphic format “helped make stories and situations relatable and easy to visualize,” he says. Pack had written an essay on John Lewis in elementary school. He was excited for this “once in a lifetime” opportunity to hear him speak in person.

On November 11, 2015, to a capacity crowd of more than 800 at the U, Lewis shared his story of growing up one of 10 children of sharecroppers in highly segregated rural Alabama. As a child, he saw “whites only” signs and asked why. When he had to sit in the balcony of movie theaters, he asked why. Lewis was told, “That’s the way it is. Don’t get in the way, don’t get in trouble.”

At age 15, he heard a radio show about Rosa Parks, who refused to sit in the “colored” section of a bus, and about Dr. Martin Luther King, Jr. “The actions of Rosa Parks and the words of [Dr.] King inspired me to find a way to get in the way, to get in trouble,” he told the crowd. “And that’s what I did, I got in trouble. Good trouble, necessary trouble.”

Lewis’s first act of civil disobedience, at age 16, was to request a library card.

Inspired by Dr. King, Lewis began “studying the way of peace, the way of love, the way of nonviolence. ” Lewis joined students and adults of all ages who bravely challenged the segregation laws of the South. 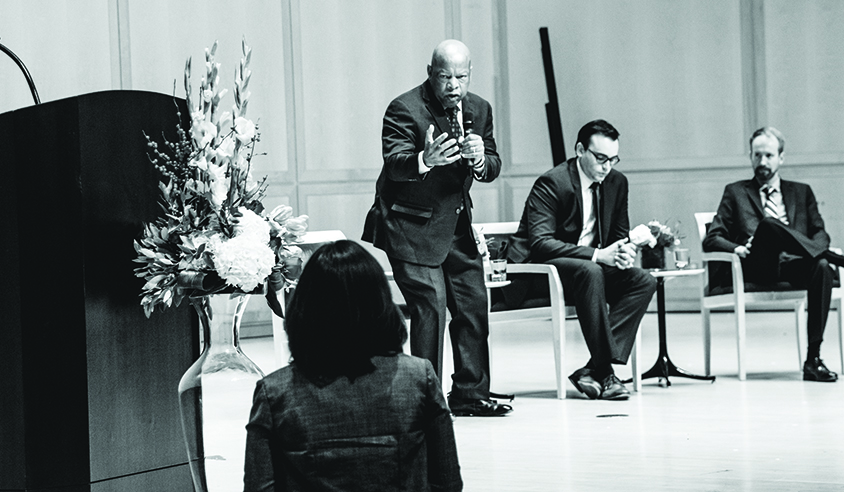 U.S. Congressman John Lewis speaking passionately about civil rights to a capacity crowd at the U last November.

Sitting at “whites only” lunch counters in Nashville, they suffered attacks. People “spit on us. Put a lit cigarette out in our hair or down our backs,” he said. As soon as one group of students was knocked unconscious or thrown in jail, another group arrived to request to be served. Then came the Freedom Rides, in which blacks and whites rode together on segregated buses. In town after town, they suffered assaults, firebombs, and beatings.

Lewis was one of six people who organized the August 28, 1963, march on Washington. He spoke just prior to Dr. King’s “I Have a Dream” speech. It was one of the actions that spurred the passage of the 1964 Civil Rights Act. The following year, Lewis led a march from Selma to Montgomery, Alabama, to demand voting rights. The bloody attack on the marchers, broadcast nationwide, hastened the passage of the Voting Rights Act of 1965.

In 1986, after more than 40 arrests, Lewis entered political life. “If you would have told me that some day I would be a U.S. Congressman and that an African American would be the president of the United States…,”

Lewis said to an impassioned round of applause near the end of his speech. Lewis urged students to become involved in the political process. “There are forces in America today that are trying to take us back to the time when it was impossible or difficult for students, young people, people of color, and seniors to participate in the democratic process,” he said. “In the final analysis, it doesn’t matter if we are black or white or Latino or Asian American. We’re one family. We live in the same house.”

Pack was impressed by Lewis’s message that “if there is a problem within our society, the best way to fix it is to organize a method of altering the obstruction.” As citizens, he says, “we have the ability to elect officials who can implement change on a government level.”

However, Pack is skeptical that activists today will tolerate the violent attacks that characterized the civil rights era. He sees protests, fueled by social media, as a more viable way of drawing attention to the need for social change. “Social media can introduce younger generations to ideas about injustices around the world, which is powerful enough to lead to change if enough people follow the movement,” he says.

A finance major and MUSE intern, Ramirez already knew the power of MUSE speakers. She had first learned about the MUSE program when she heard that Sonia Sotomayor was coming to campus in 2014. She immediately wanted to invite Latino students from her high school, Cyprus High, in Magna. “I thought it would be a great opportunity for them to be inspired by a successful Latina woman,” she says. The program gave her the green light and copies of Sotomayor’s books (Ramirez led a book discussion). She anticipated 30–40 students attending the speech, but more than 100 came. 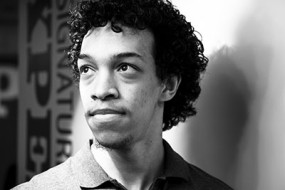 “Race relations will remain stagnant if no action is taken and people do not speak about injustices,” says student Tyrell Pack.

Ramirez found the timing of Lewis’s talk propitious. “His speech was inspiring,” she says, “especially with everything going on in the country today. It definitely made me think more about how to approach things with peace, not violence or hate. I already believed we still have a long way to go regarding civil rights and equality, and meeting the congressman only made me want to be more involved and informed.”

Samatar’s first experience with MUSE and the U was when he was “lucky enough to miss school for a day,” at West High School, to hear 2013 MUSE keynote speaker Wes Moore, a black combat veteran and author. While on campus, Samatar learned more about MUSE. And later when he was trying to decide which university he wanted to attend, he came back to campus to help run the MUSE table at Red, White, and U day. “That night, I applied to be a MUSE Scholar and was accepted,” he says. “The MUSE program is one of the reasons I am at the University of Utah.”

Prior to Lewis’s speech, Samatar had been deeply concerned about racial injustices happening on campuses such as the University of Missouri. “A student went on a hunger strike and was willing to risk his life for justice,” Samatar explains. “This really made me question if I am doing enough to educate myself.” He says he learned from MUSE keynote speakers Wes Moore and Congressman John Lewis that he has to take responsibility to educate himself. “You can’t do something if you know nothing,” he adds.

Ramirez, Samatar, and Pack share a common experience with MUSE. They all grew up in Utah. None has lived anywhere else except as small children. For them, the MUSE experience, especially the speakers, has opened their eyes and minds to the broader world and encouraged them to explore new possibilities. In Utah, says Samatar, it’s frightening to see “how comfortable” you can become. “You know there are injustices, but they don’t always affect you as much as they should.” Through his experience with MUSE, the Black Student Union, and Diversity Scholars, he is becoming more aware.

Pack agrees that “race relations will remain stagnant if no action is taken and people do not speak about injustices.” He says, “Both March and Lewis’s presentation helped me realize that I can get involved with programs focused on topics I am passionate about.”

Ramirez notes that in Utah, young people may not learn about all of the educational opportunities available to them, or may be discouraged from pursuing them. “At my high school,” she says “a speaker came to our class and told us ‘college isn’t for everyone.’ ” It was an AP class.

She sees the MUSE program as “helping students meet people in positions of power and see that these positions and the ability they offer to make change in the world are accessible to them.” Hearing the speakers, she says, “helps you realize they are very similar to you in a lot of ways and that you have the same opportunities.” Personally, she learned from Sotomayor and Lewis that “If I want something, I can fight for it. I can make a difference.”

Following Lewis’s lead, Ramirez is looking for a way to “get into ‘good trouble.’ ” She will apply to law school this fall.

—Susan Vogel is a freelance writer, publisher, and attorney based in Salt Lake City.

To learn more about the U’s MUSE program, see the 2011 Continuum feature here.

One thought on “Good Trouble”