Most days, the sun hadn’t risen yet. But that didn’t stop Connor Yakaitis BS’16 from starting legislative business at the Utah State Capitol at a time when many of his fellow University of Utah classmates were still hitting the snooze buttons on their alarms.

During the 45-day legislative session last year, Yakaitis, then a senior at the U, arrived at 6 a.m. for work as an intern with Sen. Jim Dabakis. Days spent watching the legislative process from a front-row seat fascinated Yakaitis, and often, he stayed at the capitol until nearly 10 p.m., soaking up the experience of life as a policy maker. Each day brought a new challenge, but also many rewards.

“I would constantly go back and forth between the floor of the Senate and the office to discuss current bills and votes with Senator Dabakis, often running full speed through the halls of the capitol,” recalls Yakaitis, whose internship placement came with help from the University of Utah’s Hinckley Institute of Politics. “I became well connected with many political figureheads and even got to sit in on weekly briefings with Governor Gary Herbert.”

Yakaitis’ political internship, like those of hundreds of other U students, is just one example of several initiatives—both formal and informal, and inside and outside the classroom—facilitated by the U to educate students on the political process and help them become a part of it.

A TOP INSTITUTE IN THE WEST

A young Perry interned with Sen. Orrin Hatch in Washington, D.C., an experience that inspired him to later attend law school at the U’s S.J. Quinney College of Law and go on to work in the public sphere. He served as chief of staff to Utah Gov. Gary R. Herbert, where he helped the governor with a landslide victory in the November 2010 election. He joined the U as vice president for government relations in 2011.

Now, he also oversees the Hinckley Institute, the U’s flagship center for immersing students in the political process. Established in 1965 through funding from the Noble Foundation and Robert H. Hinckley (one of the founders of television network ABC), the institute dedicates itself to teaching students respect for practical politics and the principle of citizen involvement in government. During 2014-15, the institute observed its 50th anniversary by hosting a record-setting 116 political forums. And earlier this year, the institute made international headlines when Mitt Romney visited Gardner Hall for a discussion on the state of the 2016 presidential race.

The Romney event, although particularly high-profile, is emblematic of the institute’s well-known series of political forums, designed to enhance students’ learning opportunities and foster discussion and critical thinking about political issues in the world, says Perry. “All of our programs at the Hinckley Institute—from the forums to the voting initiatives to the internships themselves— are aimed at getting students exposure to the political process, and hopefully a respect for it and a desire to stay committed to it for their entire lives.”

The Hinckley Institute has coordinated more than 5,500 internships since its inception. Current U students Hunter Howe and Tanner Holcomb recently interned at the White House and with the campaign of Democrat presidential nominee Hillary Clinton, respectively. Any student at the U can work with the institute’s internship program, regardless of major, and former interns have gone on to work in government agencies, pursue impactful careers in the private sector, and, of course, hold public office.

Dozens of other local government leaders served internships through the institute, and a host of up-and-coming leaders cite Hinckley as a starting block for their political aspirations. Over the summer, Don Willie BS’11 MPA’14 ran for a city council seat in the newly established city of Millcreek in Salt Lake County. Although he didn’t advance out of the June primary his first time around, he will likely be back for a future election.

“While my education gave me the academic knowledge to excel in the public sector, it was amplified by practical experiences through my involvement at the University of Utah,” says Willie. 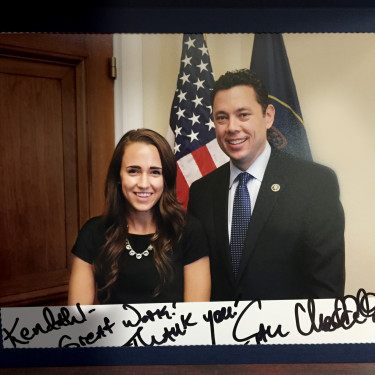 Kendahl Melvin BA’15 with Congressman Jason Chaffetz, whose office hired her as a legislative assistant after her 2015 internship with the House Oversight Committee.

This year, the Hinckley Institute is partnering with the newly established Kem C. Gardner Policy Institute, an arm of the David Eccles School of Business, to produce a series of election products that will help Utah voters make educated choices.

Called “Informed Decisions 2016,” the collaboration aims to identify the most important issues on voters’ minds and host engaging and informative candidate conversations. The project includes creating election briefs that explain why an issue is important, what was learned from focus groups convened to gauge public opinion on issues, what the data teach us about the issue, and the policy options voters should consider. Initial snapshots explore infrastructure, taxation, and education. Candidate debates through November offer the public a chance to see candidates square off on differing viewpoints.

Elsewhere at the U, the master of public policy (MPP) and master of public administration (MPA) programs are also offering unique opportunities to learn how to shape public policy and opinions, and the programs have earned a reputation for producing students who earn top honors at the national Policy Solutions Challenge competition.

For three years in a row, U students have won the national championship at the competition’s final round in Washington, D.C. Earlier this year, Fatema Ahad MPP’16 and Annette Harris, both then students in the MPP program, were challenged to propose policy solutions for the lagging rate of college completion in the U.S. Harris continues in the MPP as well as master of public health program. Ahad, who graduated over the summer and aspires to a career in social policy as an analyst, praised the relevance of the knowledge and skills she gained in the MPP program.

“For instance, I learned about policy analysis, research design, best practices of research, and cost-effectiveness analysis exercises from the core classes of the program,” says Ahad. “Every class I took, my professors were there to inspire me. Every time I felt the pressure of grad school, they got me going.”

Beth Henke, program manager for the MPP program, says the U has established itself as a top institution of public policy through a strong and innovative academic program. “Most traditional public policy programs teach all of their courses out of one department. Our students pick electives from all over campus, providing them with the best experts the area has to offer,” Henke says. “I think this is what has allowed us to take top prize in the past three years on such diverse topics as employment for younger workers, drinking water supply, and increasing the national rate of college completion.”

“The three-peat is such an unprecedented achievement because it requires one program to be able to create innovative solutions to vastly different social problems,” she adds. “It requires a creativity and fluidity in problem solving that will allow our graduates to serve our country well as they tackle finding public policy solutions to issues facing our nation.”

EVOLVING WITH THE TIMES 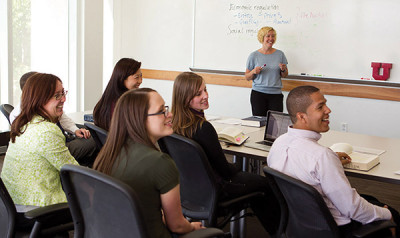 Associate Professor Lina Svedin and MPA students share a lighthearted moment in their Governance and the Economy class—one of the core classes in the program’s innovative curriculum.

At the heart of the U’s efforts to inspire students to participate in the political process is its Department of Political Science, which collaborates closely with the Hinckley Institute. Along with classic coursework in comparative politics, political theory, and government, the department has introduced a new area of emphasis called community involvement and nonprofit leadership. Now, besides the fundamental poli sci courses, students may enroll in classes such as “Neighborhood Democracy” and “Democratic Activism and Social Change.” The emphasis fits with the U’s mission of fostering student engagement with the community and preparing students for careers in the nonprofit and public service sectors, says Mark Button, chair of the department.

“What we’re doing is trying to rethink the way political science curriculum can address the kind of changes we can face locally as well as nationally,” says Button. “A lot of universities see the educational benefits of designing what we call transformative learning experiences. Students who get excited about their learning retain more and achieve more.” He adds, “We want to bring students into the classroom and develop their skills as civic advocates.”

The department has also added new courses to keep pace with current news and the changing political landscape. For example, Assistant Professor Jim Curry is teaching a course on political polarization this fall, exploring a topic that is highly visible in the presidential sparring on the campaign trail. Professor Ella Myers introduced a course on the politics of inequality.

And the learning opportunities aren’t only for full-time enrolled students. For 23 years, U political science instructor Tim Chambless has led a weeklong class titled “Capital Encounter” in Washington, D.C., which has been open to nontraditional students and others unable to pursue a traditional Hinckley internship in the District. This year, the course was offered through the U’s Osher Lifelong Learning Institute, for learners age 50 and older. Twenty community member students went with Chambless to the nation’s capital, where they toured the National Mall, U. S. Holocaust Memorial Museum, National Archives, and C-SPAN, and visited the Supreme Court Building.

By the time Yakaitis, the former Hinckley intern for Sen. Dabakis, graduated from the U last spring, he’d landed his current job as communications director for Charlene Albarran’s campaign for Congress in Utah’s 2nd Congressional District.

He’s been campaigning with his boss across the district, using skills he sharpened through both his senate internship and studying political science (with a minor in campaign management) at the U—opportunities for which he’ll always be grateful, he says.

“I have a full-time job in my major. I cannot thank the Hinckley Institute enough for getting me in the fast lane to a successful future,” says Yakaitis. “The whole internship experience was transformative.”

Web Extra: Two alumni competing in the same race share how the U has helped them and offer advice for others aspiring to political office in the short feature here.

One thought on “Cultivating Political Passion”