On Guardsman Way, just east of Rice-Eccles Stadium and across the street, construction workers have been laying brick and hanging drywall on a new Football and Sports Medicine Center at the University of Utah. Take a tour through virtual video renderings that the U’s Athletics Department has created to show what the facility will look like, and you’ll see the grain and warm hues of smooth wood accents and floor-to-ceiling windows that let sunlight flood some of the building’s glittering gathering spaces. Stay a little longer, and you’ll see giant flat-screen TVs inside slick meeting rooms and offices, inviting hydrotherapy pools in another room, and a seemingly endless array of training equipment in a 21,000-square-foot weight room. 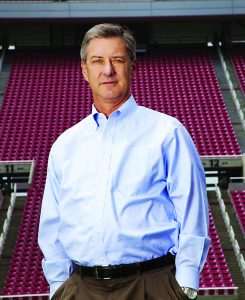 Athletics Director Chris Hill says the new facilities will help the U stay competitive in the Pac-12. (Photo by August Miller)

When the $30 million facility opens this summer, it’s expected to serve more than 400 student athletes, including 100 or so football players, who make up 18 varsity teams from various sports at the U. And it’s just one step in a larger, five-year plan to improve the quality of the U’s practice facilities and playing fields.

In the real world of the Pac-12, which the University of Utah joined in 2011, the Utes are playing in the first period of a game of catch-up in a league where the U’s comparatively meager athletics operating budget of $36.8 million for 2010-2011 was the lowest in the conference. In comparison, the average athletics operating budget in the Pac-12 during 2010-2011, the most recent year for which figures are available, was $63.5 million. Given those numbers, it’s no surprise that athletics facilities at the University also lag behind those of many of its Pac-12 peers.

The U aims to even the score with or surpass competing Pac-12 schools through a $150-million, five-year athletics resource and facilities plan that, by 2016, will usher in new training, practice, and playing areas on the U campus for basketball, softball, tennis, swimming, and football. By building the new facilities, the University intends to ensure a level playing field when it comes to recruiting top athletes, who in theory will help the U stay competitive in one of the nation’s most talent-rich athletics leagues. 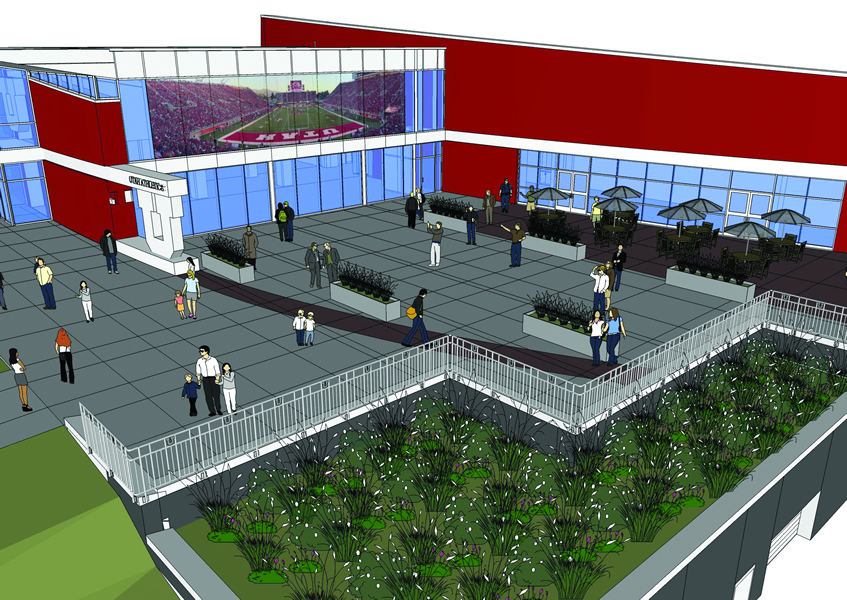 The floor plan for the street level of this cornerstone effort to improve athletics facilities at the U starts with a 10,200-square-foot outdoor patio and a 6,614-square-foot Hall of Fame area. Athlete-specific nutrition services will be dispensed in an 11,457-square-foot cafeteria.

The building, slated to open in summer of 2013, also features a 15,164-square-foot training room on the lower level, along with hydrotherapy pools to aid in rehabilitating injured athletes, more than 15,000 square feet of meeting rooms, a 160-seat auditorium, a locker room, a player lounge, and an impressive 21,000-square-foot weight room.

In early 2011, U Athletics Director Chris Hill and a few staffers visited a handful of cities around the country to view football facilities at other universities before they began plans for the U’s center. The new building, Hill says, will be “excellent.”

As part of the design, architects included energy-efficient equipment, windows, and insulation with the hope of achieving a coveted LEED (Leadership in Energy and Environmental Design) Gold building certification from the U.S. Green Building Council. Funding to cover the $30 million price tag is split about evenly between money from the athletics budget (mainly TV revenue) and donations.

For U Athletics Director Chris Hill MEd’74 PhD’82, the reality of needing an ambitious five-year plan crystallized upon hearing that the Utes would be in the Pac-12. “It quickly became apparent that we need to support our student athletes and our coaches with operating expenses and facilities that put us in the game with the rest of the league,” Hill now says.

The strategy behind the U’s building plan is to create facilities that will dazzle, delight, and, of course, serve student athletes for decades. In addition to the football center, plans are under way to build a softball complex, outdoor tennis courts, a Basketball Training and Sport Performance Center, and a swimming and diving complex. The Athletics Department also intends to improve its soccer field and expand the Burbidge Academic Center for providing academic support to student athletes.

Indeed, the U is currently the only Pac-12 school without a 50-meter pool or outdoor tennis courts. Hill says all of the facilities upgrades are needed—and soon—to compete. “We’re moving this as fast as we can,” he says. 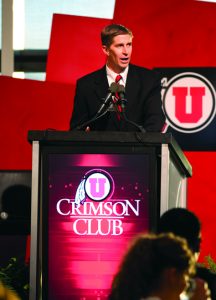 In other sports, the University of Arizona has a new $20 million gymnastics practice facility. The University of Oregon put down $227 million for a new basketball arena. And Oregon State University is spending more than $18 million to improve its basketball facilities.

Hill says that eventually he’d like to see the U’s sports facilities and budget land somewhere in the middle of the Pac-12. Achieving that goal, he says, will require the $150 million. One-third of that amount, $50 million, will come from Pac-12 television revenues. The Athletics Department launched a capital campaign last spring with the aim of raising the remaining $100 million from private donors. So far, the U has received $7 million from the Pac-12 television revenues and raised $22 million from private donors.

As part of the Pac-12 revenues, the U will see its annual share of the Pac-12 television 12-year contract go from $8 million this year to $12 million next year and, upon being fully vested, about $16 million a year by 2015. Brisk ticket sales, which generated nearly $10.4 million last year, have planners talking about how to squeeze more seats into the south end of Rice-Eccles Stadium. Corporate sponsorships, expansion of merchandise sales, and licensing revenues also are expected to help the U generate more money to stay in the game.

North of the McCarthey Family Track and Field on Wasatch Drive
$4.5 million

In the spring of 2013, the U will begin hosting home softball games at its new 500-seat stadium, day or night, with the addition of a lighted field. The entire complex includes a press box, athletic training room, outdoor batting cages, and an indoor hitting and pitching facility.

While football, basketball, and gymnastics may attract the most attention of Ute sports, softball is one area that is no less competitive in a league where the Pac-12 is consistently one of the top conferences in the nation. U Athletics Director Chris Hill anticipates that the new digs will begin to turn the recruiting tables and eventually make the women’s softball team a Pac-12 powerhouse.

Welch Suggs, a former associate director and now a consultant for the Knight Foundation Commission on Intercollegiate Athletics, says the U’s plans are all “doable.” But it won’t be easy, he says: “How much wealth is there, and how much competition does Utah face in its home territory?”

Suggs now studies college sports issues as an associate professor of journalism at the University of Georgia, which is among only a handful of schools in the country that year after year are able to cover their athletics expenses with the revenue brought in by sports programs. The universities of Alabama, Florida, and Iowa, as well as Ohio State University, are a few others.

The norm is that athletics departments end up relying on their universities’ institutional support to cover athletics expenditures. Whether that will happen to the U, Suggs says, may depend in part on whether worst-case scenarios unfold, such as another economic recession or chronically losing teams, which hurt ticket and merchandise sales.

Hill, however, believes the U Athletics Department will be able to prevail, and balance its budget, with its fundraising through private donors. And the projects outlined in the five-year plan don’t require tapping into University institutional funds or public monies. “It’s all athletics, all our funding,” he says. “We want that to be clear.” There is “zero” competition between athletics and academics for public funding, Hill says. 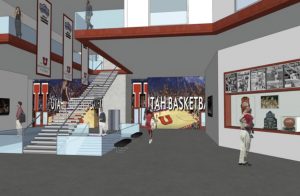 Planning is still under way for this facility, expected to open for the 2014-2015 academic year. An artist’s rendering depicts two full-sized men’s and women’s practice gymnasiums on either side of a large area that features a weight room, video-viewing rooms for the women’s and men’s teams, and a training room. Plans also include offices, meeting rooms, and a revamped basketball Hall of Fame, as well as a hydrotherapy area and facilities to support strength and conditioning for athletes in various sports, including basketball.

U Athletics Director Chris Hill is confident that the basketball program will continue to improve and live up to its proud history, and donors already have stepped up to help. “They understand the vision,” Hill says. One donor for this $24 million project has already committed a seven-figure gift that provides a jumpstart for the committee formed to raise $10 million in donations for the building. The U will bond for the project, which also will be backed by dollars from the U’s Pac-12 television contract.

Doug Knuth, the U’s senior associate athletics director for external relations, is spearheading the Athletics Department’s private fundraising efforts. His challenge is to find potential donors who are passionate about a particular sport to see if they’re ready to support a specific Utah team. He believes a strong athletics program at the U helps build an inviting “front porch” to engender support for the rest of campus. “When athletics wins, we all win,” he says.

For the new Football and Sports Medicine Center, about half the cost, roughly $15 million, is coming from donations, and the rest will be funded through television revenues. At least 20 donors gave more than $100,000 for the project. U football alum Alex Smith BS’04 donated $500,000, and his name will appear on a new strength and training room in the building.

Hill says the glittering new center is a cornerstone for the U’s overall effort to improve its resources for athletes. “It puts us in the game to provide our student athletes with support.”

—Stephen Speckman is a freelance writer and photographer based in Salt Lake City, and a frequent contributor to Continuum. 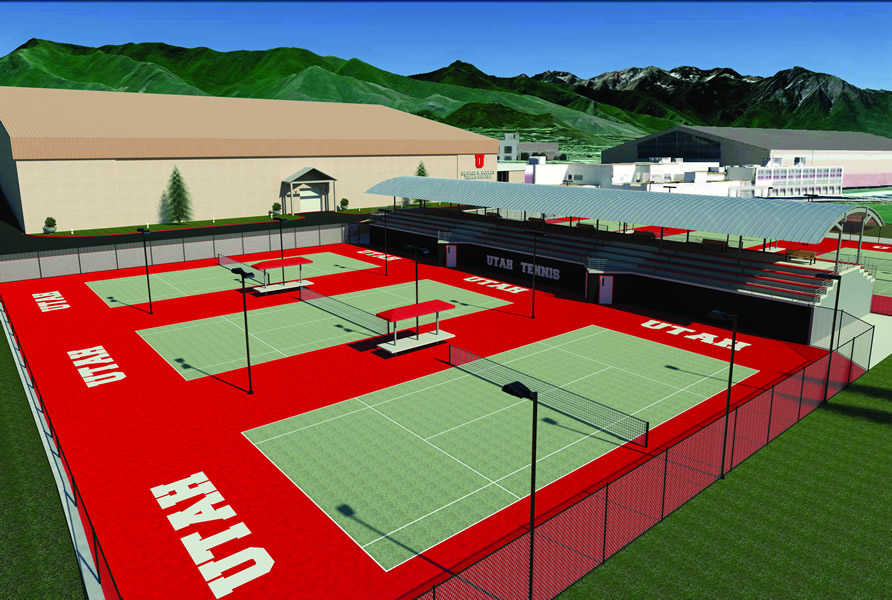 The U is the only Pac-12 institution without an outdoor tennis facility or 50-meter swimming pool. That will soon change.

By fall of 2013, the men’s and women’s tennis teams will have six new courts with an elevated spectator viewing area next to the Eccles Tennis Center on Guardsman Way. The existing indoor tennis center is also getting upgrades that include electronic scoreboards, a spruced-up locker room, and a revitalized Hall of Fame. The tab for all of the new construction and improvements is about $2 million and is being funded mostly by donations.

In 2016, building will begin on a $9 million pool and diving facility, bringing the U at least up to par with the rest of the Pac-12 programs. Construction is expected to take about a year.

U Athletics Director Chris Hill says several smaller projects also are in the works to improve U athletics facilities, including plans to spend $750,000 on providing better drainage for the soccer field. A 4,000-square-foot, $1.2 million expansion of the Burbidge Academic Center is expected to be complete by fall 2014 and is being funded entirely by donations. The expansion will include areas for academic support services, more meeting rooms, and study spaces.