The San Diego team opted to forgo the double-team defense that March evening at the Huntsman Center, and essentially took on University of Utah women’s basketball stars Taryn Wicijowski and Michelle Plouffe one-on-one. Wicijowski hustled to lead the team scoring with 23 points, Plouffe achieved her 10th doubledouble of the season with 21 points and 15 rebounds, and the Utes defeated San Diego 61-50 in that second round of the Women’s National Invitation Tournament.

Of the five games the Utah team played to reach the WNIT championship last spring, the game against San Diego was the only one on home ground. Yet the 15,000-capacity Huntsman Center had many empty seats that night: Only about 900 people showed up to watch.

It’s a symptom University of Utah Coach Anthony Levrets and Athletics Director Chris Hill MEd’74 PhD’82 hope to change over the next few years as they take steps to continue growing the U women’s basketball program. Their plan includes not just intensified recruiting efforts, but also using strategic marketing efforts to boost awareness of the team and its successes.

Toward that end, Levrets has hired Kim Smith BA’06, a former All-American and U player from Canada, to be the team’s new community development director. Her task includes presenting U players as “ambassadors” of the sport, in an effort to promote the U team, and the University, to the community and groups such as the Girl Scouts and United Way. The result hopefully will include filling more seats at the Huntsman Center.

“We have to put more funding into it, that’s for sure,” Hill says about plans to grow the visibility of the U women’s basketball program, and it’s “very, very high” on the list of priorities for the University.

Levrets says two of the biggest challenges he faces are recruiting local talent and repeatedly engaging a community of potential fans who are more likely to be drawn to U football, gymnastics, or men’s basketball. Yet the U women’s basketball team has a long history of success, even if it hasn’t always attracted big crowds and noisy media attention.

Since the team’s inaugural 1974-75 season, it has been one of the top 10 all-time most successful NCAA women’s basketball programs in terms of its win/ loss percentage. This past season, the team had a 23-14 record and won enough games in the WNIT rounds to make it all the way to the championship game, against Drexel in Philadelphia. It was a suspenseful matchup: Drexel led by five points with four minutes remaining, before back-to-back three-pointers by the Utes from Cheyenne Wilson and Iwalani Rodrigues gave the team a one-point lead, 43-42, with three minutes left in the game. A Drexel layup gave the Dragons a onepoint lead with 21 seconds left, and after a last-ditch Utah foul, Drexel scored on both free throws to win the game, 46-43. Even so, forwards Plouffe and Wicijowski were both named to the WNIT All-Tournament team. Plouffe also set a WNIT record with 83 rebounds during the tournament.

Traveling the country for the WNIT was a stark reminder to the U players what they had been missing at home: noise. “We played at Kansas State, and they have a big arena like we do, and they filled up the place pretty well,” says Wicijowski (who pronounces her last name witch-OW-ski). “We went to Drexel, and they had a really small arena, but they packed as many people in there as they possibly could.”

Wicijowski, now a senior premedical student, says the last time she remembers when more than 2,000 people showed up to a U women’s home game was when she was a sophomore and the team played top-ranked Stanford. The U—and its enthusiastic home crowd—almost upset Stanford in a game that was heavily marketed to the community, something that until recently the U has not done on a consistent basis. 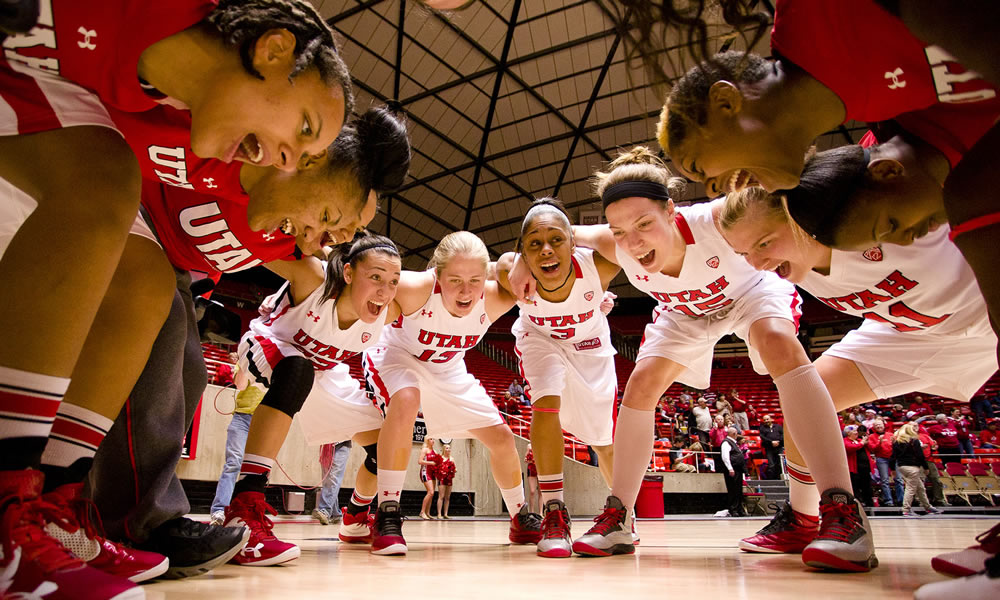 The U team huddles for a cheer during a game last March against San Diego during the WNIT. The U won , 61-50, and advanced to the championship game. (Photo courtesy U Athletics Department)

“It was the most fun atmosphere I’ve had since I’ve played here,” the six-foot, three-inch Wicijowski says. “If we could recreate that, we could get some upsets.”

Despite the team’s strong history, it’s rarely been able to draw such crowds. The U women’s team was ranked ninth by the NCAA in 2012 for its all-time winning percentage, with 802 victories and 331 losses for a .708 percentage over a 38-year history. That’s thanks in large part to former coach Elaine Elliott, who guided the team for 27 seasons. Elliott also was responsible for establishing the U’s recruiting pipeline to Canada, which has brought in not just Smith, Wicijowski, and Plouffe, but other excellent players, as well. After Elliott retired, she moved on to Westminster College in Salt Lake City, where she is now an assistant coach for the women’s team.

Levrets was an assistant under Elliott and became coach of the U team when Elliott left in 2010. Elliott’s former players at the U say she brought out the best in her team and made them believe in themselves, which resulted in wins, though still no stellar audience numbers.

Now that the U is in the Pac -12, however, the pressure has intensified to increase attendance, says Athletics Director Hill. Collectively, Pac-12 teams average 1,872 people in attendance at home and neutral-site games, according to the NCAA. “Obviously, it’s a very tough league,” Hill says. “I think women’s basketball in general has fallen a bit in attendance, except in specific places and, you know, we just have to work at it. … It’s hard work, and it’s got to catch fire.”

More NCAA women’s college basketball games will be televised this season (about 100) and next (about 150), compared to fewer than 70 last season, and some games will be aired on ESPN. The U women will be on TV about a dozen times this season, with half of those games played at home. Levrets says that’s a “double-edged sword” because it will also show a national audience how few people attend U games, which could hurt recruiting efforts.

U Athletics Assistant Director of Marketing Matt Thomas for the past two seasons has been targeting any organization supporting female youth basketball leagues, offering those girls and their families opportunities to meet the U team, have a pre-game party, and then scrimmage on the court during halftime. That strategy, formally known as the “Youth Team of the Game” program, will be repeated for 2013-14. 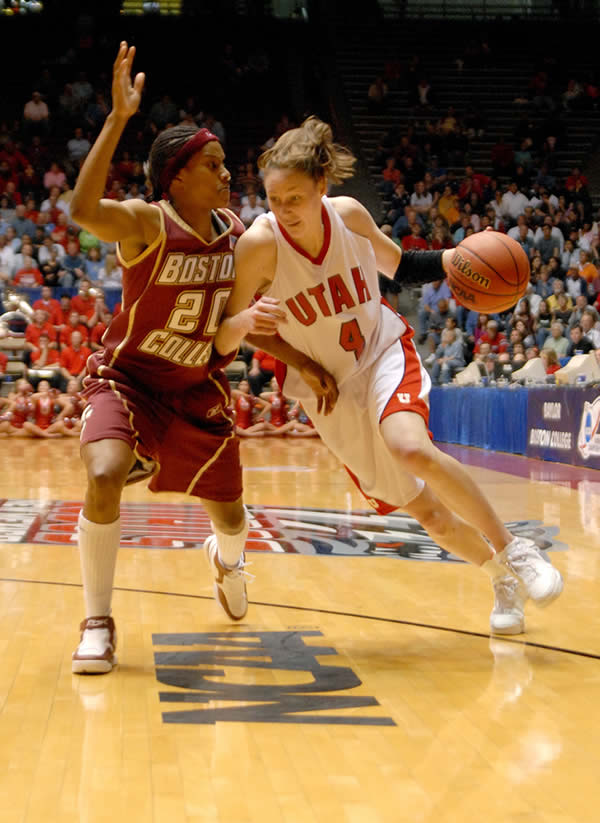 “That brought in a significant amount of individuals,” says Thomas. “It was a big hit last year.”

Auburn University’s former head coach, Nell Fortner, who is a friend of Levrets, faced similar challenges in attendance when she signed on in 2004 to lead a team that was drawing 200 to 300 people per game. But she says she “heavily” marketed players to the community while volunteering their time, and she spoke to every civic group she could, each year until she left in 2012. By the 2008-09 season, when Auburn won the Southeastern Conference title, the team had posted the biggest attendance increase in the NCAA, averaging more than 4,000 people per game. Her starting five that year, she notes, were all “local” women from Alabama. Winning was a big help, she says, but it took building attendance a little each year by constantly immersing the team in the community. “You have to do it,” she says. “You have to let people know who you are and who your players are.”

No one understands that more than Levrets and Hill, who agreed to provide funds to hire Smith, a WNBA Sacramento Monarchs 2006 first-round draft pick, to lead the community outreach charge. The U also is currently raising money to fund construction of a $24 million practice facility for the men’s and women’s teams, which Hill predicts will help with recruiting. The new facility is expected to be complete in 2015.

“We’re going to continue to graduate our players,” Levrets says. “That’s the number one priority.” That goal of his is followed closely by increasing attendance and, some day, winning a championship.

Levrets made trips to Oregon, Texas, Tennessee, Illinois, and Georgia over the summer, in search of players who are great on and off the court. Recruiting the best might help attendance, but only if the community knows who they are. That’s where Smith—the only U women’s basketball player to have her number retired and hanging from the Huntsman Center rafters—is Levrets’ ace in the hole.

Smith says one of the first things she wants to do when she starts her new job this month is to take a closer look at how Coach Greg Marsden and others have grown the U women’s gymnastics program over the years and brought it to the national spotlight. Marsden’s team has won 10 national titles, and he’s been named national coach of the year seven times. “They have been so unbelievably good at a national level for so long, it’s incredible,” Smith says. “That culture has been in Utah longer than we have as a program.”

Smith plans to start her large task close to home. “She will be a grassroots member in the community, building relationships with anybody who will let us in the door,” says Levrets, whose goal is to reach an average attendance of at least 2,500 to 3,000 at home games, with big games drawing upwards of 6,000.

Kevin Dustin, assistant director for the Utah High School Activities Association, notes that five Division I programs in Utah currently draw from a growing but small pool of local talent. Women’s collegiate basketball is still a relatively young sport, with women allowed to play only after Congress enacted Title IX in 1972. Dustin says that may mean it may take another generation before the number of great recruit-worthy female high school players significantly increases. But following the national trend, women’s basketball continues to gain traction in Utah, with more high school girls playing year-round in clubs and high schools and sometimes at out-of-state tournaments. The skill level, Dustin says, is getting better in Utah. 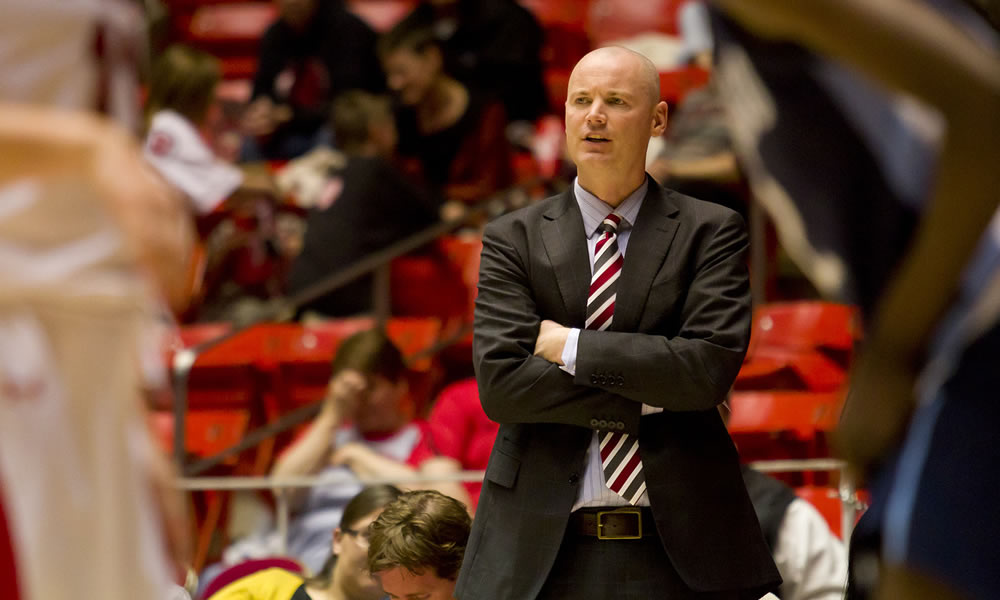 Coach Anthony Levrets says televised games in the Pac-12 have thrown a spotlight on attendance. (Photo courtesy U Athletics Department)

Smith says the U is still attracting talent both locally and from abroad under Levrets. He has coached All-Americans Morgan Warburton BSW’09, Kalee Whipple BS’10, and Leilani Mitchell BS’08, who is still playing in the WNBA’s New York Liberty. One of Levrets’ current stars is six-foot, four-inch forward Plouffe, who, based on her skill level, stats, and intentions, appears to be headed for one of the WNBA’s 12 pro teams after graduation next year.

Plouffe says the poor attendance at U games has weighed on her. “Emotionally, during the game, I think having a crowd can really change the momentum of the game,” she says. “And we’ve never had that here.” A big factor, she says, might be trying to get more U students, most of whom commute and don’t live on campus, to come back for women’s basketball games. She’s hopeful Smith will help with that.

Levrets agrees. “The energy in the building is what matters,” he says. “It’s fun to play in a building or atmosphere that provides energy.” He, Smith, and Hill, along with the Athletics Department’s marketing team, aim to find just the right combination of fan-building, community engagement, recruiting, financial support, and continued focus on academics to take the U women’s program to the next level—and fill more and more seats along the way.

One thought on “Building a Team”