In recent years, the University of Utah has made itself a hub for energy innovation and a model for cost-saving efficiency measures. With the creation of its revolving loan fund in 2008, the U’s Energy Office can now perpetually finance long-term energy efficiency projects using the savings earned from existing energy-optimizing projects.

One milestone came in 2008, when the U replaced two 1960s-era coal-burning boilers with a state-of-the-art, natural gas-powered cogeneration plant. The plant supplies 10 to 15 percent of the U’s electricity needs and uses excess heat for warming lower-campus buildings. The $18 million price tag for the plant was expected to be offset over the years by saving up to $600,000 a year in energy costs. Those expectations are being exceeded because of lower natural gas prices and increased electricity costs, strengthening the economics of the project.

Office of Sustainability Director Myron Willson says the U will benefit from other planned improvements in energy efficiency and technology. “The data show that in the short term, at least in the next 10 to 15 years, most of the changes we want to make will actually save cash,” Willson says. 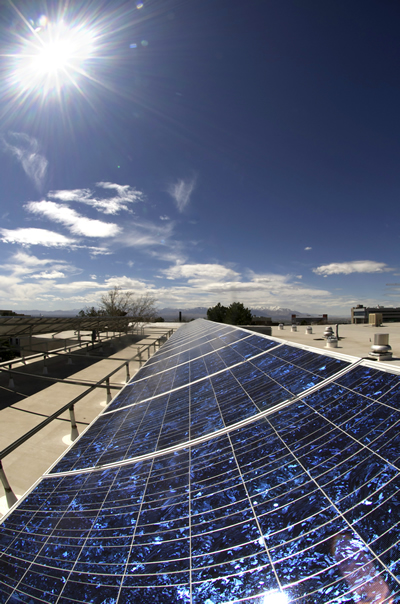 Solar panels generate energy on top of the V. Randall Turpin University Services Building at the University of Utah.

In 2010, a $1.05 million grant from the U.S. Department of Energy helped the U create the Energy Commercialization Center, which is charged with developing new energy technologies and policies. The University is now an important part of what the Energy Department calls the nation’s “innovation ecosystems,” or the network of inventors and institutions that will conceive new energy technologies. Student researchers are also exploring novel approaches such as solar panel-covered parking facilities. And an undergraduate student has gathered funds to install “solar ivy,” small photovoltaic panels that resemble ivy leaves hanging down the side of a building. The solar ivy will be placed on the south wall of Orson Spencer Hall.

To help measure the effectiveness of all these efforts, metering systems are essential to knowing how much energy, and money, the campus is expending. In the past, not all buildings had power meters, and they needed skilled personnel to physically read them. The Energy Office hopes to have automated energy meters—for electricity, water, and heating—installed on most major buildings by 2013. Public metering dashboards inside buildings will eventually allow occupants to see and compare their energy consumption.

“This will help promote energy conservation to individual departments,” says Jeff Wrigley BS’99, the U’s energy manager. Simple actions such as turning off unused lights and computers, keeping thermostats at moderate levels, and eliminating space heaters will be critical to helping the campus meet its sustainability goals, says Wrigley. “We hope this will impact the behavioral components of sustainability, and also motivate individual people to conserve energy.”

One thought on “Energy Efficiency”