As a girl growing up in rural Shasta County, California, a scrappy Lynne Roberts had to earn her first points in basketball by shooting high-arcing jumpers over her father and two older, taller brothers. She recalls dejectedly watching her shot attempts being blocked into a nearby cow pasture. A girl on a street full of boys who let her humbly hike the ball during pickup football games, she used the omnipresent good-natured sibling ribbing—that she wasn’t big, strong, or fast enough—as motivation to relentlessly work on her many games, earning 12 varsity letters in high school sports. Those countless hours of two-on-two in the family’s driveway and always playing “catch-up” with the boys in her life were the seeds of a competitive streak that grew and has propelled her through the arc of her personal and professional trajectory.

Now Roberts, 40, stands in her office as the newly minted head coach of the University of Utah’s women’s basketball team, marveling at how the space is bigger—more than 900 square feet—than her first home as an adult. Her office—like men’s basketball head coach Larry Krystkowiak’s—is in the new 101,000-square-foot Jon M. & Karen Huntsman Basketball Facility, with views of the Wasatch Mountains to the east and the Oquirrh Mountains out west across the Utah campus and Salt Lake Valley. They both have a fireplace, a 60-inch retractable television, and a private bathroom with a shower. Each space is equally impressive and a reminder to Roberts, despite her past successes as a coach in college basketball, that she still needs to earn some respect as a head coach in the Pac-12, where the Utes women’s team so far hasn’t made a lot of noise since joining the conference in 2011. Roberts started making her own noise at Enterprise High School in Redding, California, excelling in tennis, volleyball, softball, track, soccer— “I did them all”—and, of course, basketball. She earned a scholarship to play basketball at Seattle Pacific University, where she admits she cared at first more about sports and socializing. As a senior, she was named to the NCAA West Regional all-tournament team, and by that time she had settled down academically to finish in 1997 with a degree in history, following in the foot-steps of a mother who taught history at a junior high. (Her father was a vice president for berry grower Driscoll’s.) She stayed at Seattle Pacific to get a master’s in athletic administration in 2000. “It was the first time in my life that I was passionate about school,” Roberts says. Her coach, Gordy Presnell (now head coach of the women’s team at Boise State), told Roberts she would be good at coaching, and she became his assistant in Seattle from 1997- 2001, advancing each season to the NCAA Division II tournament.

On her own as a head coach, the 2014-15 West Coast Conference Co-Coach of the Year has proven her mettle, racking up an 86-33 record while head coach at California State University, Chico, from 2002-06, and becoming the California Collegiate Athletic Association Coach of the Year for two years in a row (as well as the 2004-05 WBCA West Region Coach of the Year). From 2006-15, she turned around a losing University of Pacific team in Stockton, Calif., taking it into the first round of the WNIT the past two years, and was also named the conference coach of the year in 2012-13. 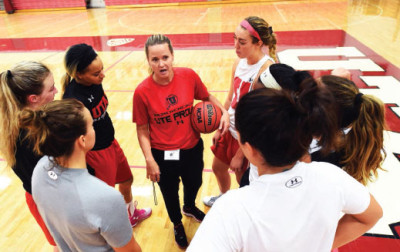 Utah Athletics Director Chris Hill MEd’74 PhD’82 is hopeful that Roberts, who signed a six-year, $1.65 million deal, will be the change the Utes need after releasing coach Anthony Levrets last spring. “I think we have a high expectation for our women’s basketball team,” says Hill. “We have a great history, and we weren’t attaining what we thought we could. We’re fortunate enough to have hired someone who we think is going to be really, really good—and we’re excited about it.” He describes Roberts as “smart, personable, and someone who has a lot of connections with recruiting.” Now that his department has set up Roberts in a new basketball facility, which Hill notes is a “tremendous recruiting tool,” he says it’s time to stand aside and let her build the team into a perennial top contender. “It’s going to take a while, because it’s a rebuilding process, just like it was with Coach Krystkowiak on the men’s side,” Hill says. “We anticipate that in five years we will be the type of team that’s in the NCAA tournament quite a bit and having a chance to advance in certain years and get to the Sweet 16 and be a major post-season player. But that’s going to take a couple of years.”

Hill says Utah Athletics has given the financial backing Roberts needs to build her staff. She wasted no time assembling her coaching staff after she was hired last April, bringing on board former Utah State player and coach Danyelle Snelgro, who also coached at Fresno State University and Texas Christian University, and Wesley Brooks, who coached at four schools including the University of North Texas, where he was the past four seasons. She has also brought on new marketing and video production hires to help her amp up excitement. But her first acquisition was Assistant Coach Gavin Petersen, who for the past two seasons had been an assistant to Roberts at Pacific. Petersen says it was an “easy” decision to join Roberts at Utah. “We work really well together,” he says. “We complement each other.” 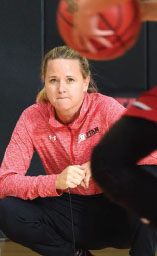 Petersen calls Roberts a “competitor,” someone who “prepares hard” and uses humor to maintain a balance and a kind of “family” atmosphere. Illustrative of the effects of that balance, he points to a game toward the end of last season, with Pacific going into hostile territory on Gonzaga’s home court, on Senior Night, in front of a sold-out audience. The perennial West Coast Conference champions earlier in the season had beat the Tigers on Pacific’s own court and had already sealed a top seed in the playoffs, and Pacific was vying for a second or third seed. “We ended up winning—it was awesome,” Petersen says. “She’s tough, passionate, those type of things we want our kids to take on…. It happens slowly, but it will happen.”

Emily Potter, the talented 6’6” forward from Winnipeg, Canada, who redshirted last season with a knee injury under Levrets, comes back eligible for three more seasons under new coach Roberts. “It’s definitely been an adjustment—I think for all of us,” Potter says. “None of us have gone through anything like this before—so, it’s kind of like uncharted waters. But it’s been going well so far.” Potter says she likes that Roberts was “honest” with her from the start and asked for her trust with regard to the direction she wants to take the team. Potter also describes the team as a family playing in a conference where they haven’t yet gained respect. “It really motivates us all,” she says. “We have a little bit of a chip on our shoulders.”

That “chip” is partly what drew Roberts to Utah. “As a competitor, I want to have a chance to win at the highest level,” she says. “This job just fit my personality. There’s kind of a blue-collar, underdog, chip-on-your-shoulder mentality here with the team that resonates with me. I love coaching that. We’re the new guys in the conference, and people kind of pat you on the head and say, ‘Yeah, yeah, you’ll get there someday.’ I love that. That motivates me like nothing else.” Utah Senior Associate Athletics Director Nona Richardson oversaw the search for a new head coach and likes Roberts’ intensity, “basketball savvy,” the respect she gained at Pacific and Chico State, and that she knows how to surround herself with the right people. “You can’t do it alone,” Richardson says. Roberts, she adds, has her “pedal to the metal; she’s still working her way upward,” and is poised to bring “relevance” back to a program that through 2014 has the 14th best all-time winning percentage in Division 1 women’s college basketball. Comparisons by Richardson and others, of course, lead to former Utes head coach Elaine Elliott, who in 27 seasons at Utah amassed a 582-234 record (Elliott retired from the U and is now an assistant coach at Salt Lake Community College). Their style of play, Richardson says, is more upbeat, faster tempo, and their approach to the game is to recruit the right kids, be disciplined, run hard, and “approach every day as if it’s your last.”

“What she did here is so cool,” says Roberts, who mentions the long line of proud former players who still feel like it’s “their program.” She talks about how the game has changed and how, ironically, the players these days are bigger, stronger, and faster—traits her brothers teased her about as a child. “Recruiting is everything,” she says, pointing to assistants with strong ties to deep reservoirs of talent in Texas and California. “It’s a great time to be at Utah,” she adds, referring in part to the new basketball facility that she calls the best in the country. “All of those things add up,” Roberts says. “That said, we’re going to have to work our tails off as coaches to get some street cred out there.” 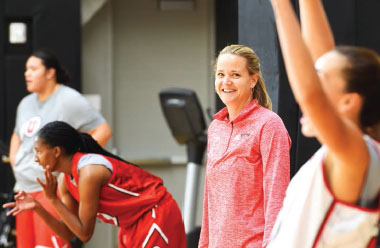 By the end of this past summer, Roberts was settling nicely into Utah. “I’ve been so impressed with the people here. There’s like a familial feel to it.” And with the mountain ranges out both directions from her office, “I’m still blown away by the beauty,” she says. She might even find time in her office to kick back on the new furniture and read a book. Roberts prefers reading about great leaders—not necessarily in sports—like President Harry S. Truman, who she points out faced the difficult task of how to end a world war. “I think his story is a great story of leadership.”

Instead of following her brothers into medicine to become a doctor, her father into the berry business, or her mother into teaching, Roberts has herself become a leader on and off the court, mentoring her players to also focus on academics. In 13 years as a head coach, she’s never had a player be ineligible because of grades, and 100 percent of her players have graduated from college. “I feel like I have a pretty good balance with the academic piece,” she says. “Even if any of these guys go on to play professionally, they’re not going to sign a $90 million contract with Nike. They’re going to have to, at some point, hang up the high tops and do something else to pay the bills. As a coach, I do take that responsibility very seriously.”

One of Roberts’ most important messages to players? “Find something you love, that you’re interested in and think you might want to do, and pursue it—and let basketball be a way that you can really enhance your collegiate experience, and get it paid for. But at the end of the day, get your degree in something you care about.”

One thought on “Young, Scrappy, and Hungry”