U of U search committee faces a challenging environment in finding a new president. 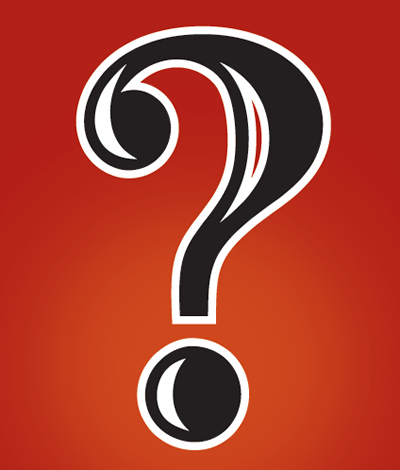 Broad administrative and management experience. A proven record of administrative and scholarly achievement in higher education. Experience and success in fundraising. Leadership qualities essential for the administration of a large, culturally diverse, and complex academic and research institution. An earned doctoral degree is strongly preferred.

The University of Utah has begun looking for a new president, and that broad description of the required qualifications, issued by the Utah State Board of Regents, is straightforward, albeit demanding.

Patricia Hanna, a linguistics professor who is president of the Academic Senate and a member of the presidential search committee, says professors would like the new president to take a leading role in supporting innovation in research and curricular development, as well as fostering interdisciplinary connections. The faculty members also want a strong communicator who can convey the U’s strengths and contributions to both academic audiences and the general public.

Marcia Cook, the president of the U of U Staff Council who is also on the presidential search committee, says staff members would like a new leader with a solid vision for the future—“a forward-thinking individual” who can “strategically plan for the success of the University in the years and decades to come.”

Those wishes are just the beginning of what will be a long and thorough search for a leader who all in the U community hope will be practically perfect in every way.

The Regents in May appointed a 20-member search committee to help them conduct a national search for a new leader, after Michael K. Young announced he was leaving the U to take the helm at the University of Washington. Young, who left Utah in May, had led the U of U since 2004. 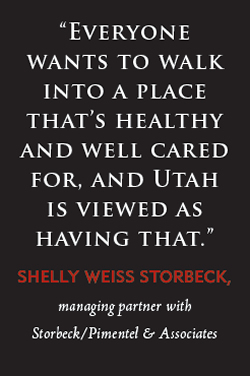 But national search-firm consultants who specialize in helping universities find top leaders say the Regents will face a more challenging environment for landing good candidates than the last time the board sought a president for the University of Utah. The proportion of college presidents ages 61 and older has grown in recent years, and they are looking toward retirement. That has decreased the number of presidents seeking other presidencies—and increased the competition the U will face, as other institutions also look to hire new leaders.

The downturn in the economy has prompted some of those older presidents to contemplate retiring sooner than they otherwise would have, the consultants say. And amid continuing economic uncertainty, even deans and provosts are more reluctant to leave their jobs and move.

“In major public universities, the economy has been a game-changer for lots of people,” says Shelly Weiss Storbeck, managing partner with Storbeck/Pimentel & Associates, a firm specializing in national higher-education executive searches.

“The kinds of cuts that are taking place in a lot of institutions are quite serious,” says Storbeck, who has conducted more than 400 searches for public and private universities, as well as other nonprofit organizations. “That has had a significant effect. More people are deciding it’s time to retire.”

Even so, many potential candidates consider the U of U presidency to be attractive. “Everyone wants to walk into a place that’s healthy and well cared for, and Utah is viewed as having that,” Storbeck says.

The Utah Regents are forging ahead with a national search, and the search committee has met during the summer to map a course and begin the process. Regent Nolan Karras MBA’70, chair of the presidential search committee, says the aim is to have the committee identify a pool of candidates and then narrow the field to three to five “highly qualified individuals” for the Regents to interview. He expects the search and selection to be completed no later than next June. Nationally, presidential searches often take up to a year, and sometimes longer.

“Because of the search committee’s strong commitment to the University and the Regents’ desire to find the best fit for this important role, I am confident that we will find the right person to lead this great institution—one of the leading research universities in the country,” he said in a prepared statement. 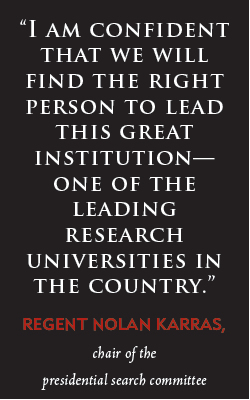 The committee is made up of four Regents, four trustees, eight U of U faculty and staff members, and four community representatives. The trustees on the committee include Neela Pack, the U’s student body president, and Keven Rowe BS’83 JD’86, president of the Alumni Association’s Board of Directors.

The committee has hired two consultants from the national search firm Witt/Kieffer, John K. Thornburgh and Robin G. Mamlet, to help identify good candidates. Campus meetings to gather comments and ideas for the search were held in mid-August with alumni, faculty, staff, students, and the Salt Lake Chamber. More meetings with the alumni and campus groups were slated for late August and in September, and those meetings will also be open to the general public.

The committee has created a Web site, as well, that will feature updates and allows people to make nominations, send applications, or offer comments. Individuals may also send nominations and applications directly to the state Commissioner of Higher Education, William A. Sederburg. After the public meetings, the Regents intend to keep the search process confidential until the finalists are announced.

In compliance with Regents’ policy and Utah’s Public Notice of Meetings statute, the board will make public the names of all the finalists who will be interviewed by the full board.

That lack of confidentiality for the finalists will hamper the U’s efforts to attract some candidates, according to the search-firm consultants.

“It’s a huge issue,” says Jean A. Dowdall, a senior vice president with Witt/Kieffer who specializes in senior executive searches for colleges, universities, and other nonprofit organizations. When consultants approach possible candidates, “the first conversation often is, ‘Is it going to be public, and how long can you protect me,’ ” she says. “They’re protecting their current job. Plus, who wants to be a public failure? If it’s a sitting president trying to go to another presidency, that’s the worst.”

Then again, other consultants say those difficulties sometimes lead to greater maneuvering behind the scenes as boards and search committees seek to find ways to keep candidates’ names private while still technically complying with open meetings laws.

But candidates’ names can sometimes become public despite the best efforts of those handling the search. Young’s candidacy for the University of Washington presidency was leaked to the news media when he was a finalist, months before he officially got the job.

Even so, the U of U presidency will lure candidates who are willing to brave those risks. The U’s entry into the Pac-12 also will be viewed as a plus by some candidates, the consultants say. It gives the institution greater stature by linking it with prominent research universities. But it also makes the president’s job harder because of the increased focus on athletics and accompanying fundraising pressures.

As for the University community’s wish list, both Hanna and Cook say faculty and staff members also want a president who will strengthen the U’s diversity across the campus.

The search-firm consultants say the wave of presidential retirements at other institutions and the limited pool of presidents searching for other presidencies may lead to greater diversity among presidents themselves. Most presidents now are older, white males, and most came to their current jobs from either a previous presidency or provost positions, according to the American Council on Education.

Now, however, with the wave of presidential retirements, institutions may begin to look at a broader range of candidates who have taken different academic leadership paths, Dowdall says.

“That is something people are anticipating in the years ahead.”

Nominations for the position of president of the University of Utah and letters of application may be submitted for the state Board of Regents to consider. They should include a complete résumé, five references, and other supporting materials, and be sent to:
John K. Thornburgh and Robin G. Mamlet
Witt/Kieffer
UUtahPresident@wittkieffer.com

Comments and nominations also may be submitted via the U’s presidential-search Web site. A schedule of campus meetings–when alumni, faculty, staff, and students may share their ideas on the presidential search–also may be found there.

—Julianne Basinger is managing editor of Continuum. She covered college leadership issues, including presidential searches, for eight years for The Chronicle of Higher Education, in Washington, D.C.

2 thoughts on “Wanted: A Leader”