It makes sense that Mike Dela Cruz BA’13, an American who grew up in the Middle East, would have pursued an undergraduate degree in Middle East studies at the University of Utah. But along the way, he chanced into a program that is shaping his future: a minor in pediatric clinical research through the University of Utah’s Academic Associate program. As an academic associate, he got firsthand experience with clinical research at Primary Children’s Hospital.

And now Dela Cruz is a full-time research coordinator in the emergency department at Primary Children’s, guiding other student researchers as they enroll pediatric patients, with their parents’ permission, in studies that will be used by physicians to hone their craft. “We’re doing the grunt work, you could say, for doctors who have upcoming or established research,” he explains. “We approach families and say, ‘There’s this voluntary research going on, would you be interested in participating?’ ”

At present, Dela Cruz is involved in a Phase II study on therapeutic hypothermia after pediatric cardiac arrest (or THAPCA), a high-stress research study. Last summer, The New England Journal of Medicine published the Phase I results of the study. “This study was a collaborative effort between me, the doctor, and other members of the team,” he says. “A physician, a resident, a nurse, and a tech will all go into the room at the same time, so the patient (or parents) tell their story just once.” And, Dela Cruz adds, the physicians value the parents’ observations and opinions. U doctors know that the parents are with their children a lot longer than they are. 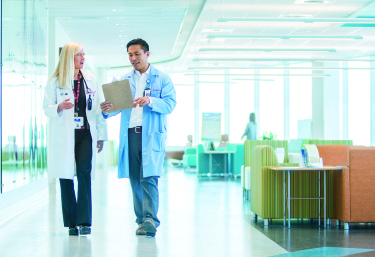 Now, Dela Cruz and other researchers are in the Phase II, which involves studying the cardiac arrests that occur in the hospital.

The catalyst for the program, which began in 2008, was Dr. Maija Holsti, an associate professor of pediatrics who works in the Division of Pediatric Emergency Medicine at Primary Children’s and is director of research in the U’s Department of Pediatrics. After a year of pre-med at Duke University, Holsti joined the Peace Corps and became a teacher at a boy’s school in Malawi, Africa. There she encountered Doctors Without Borders, a global organization that delivers emergency medical aid to people affected by conflict, epidemics, disasters, or exclusion of health care.

After returning to the U.S., Holsti obtained her medical degree and a master’s in maternal and child health at the University of North Carolina in 1999. She completed her residency at UNC in 2002, followed by a fellowship in pediatric emergency medicine at the University of Utah. “I’d been interested in education and community, and also did a lot of work with domestic violence in medical school,” Holsti explains. Along the way, she learned about a program in a Philadelphia children’s hospital that let students help enroll patients in clinical studies.

As an attending doctor, she decided there was a “great opportunity” to establish a similar program at the U, which now offers a two-year program that awards students a minor. This spring semester, 53 students are enrolled in the program. It’s a win-win for the students, Holsti says, because the students actually participate with medical teams—helping the professionals while getting important experience in medicine.

Students enrolled in the program’s Clinical Research Methods and Practice I course (PED 5900) are required to work six to 12 hours a week enrolling patients into research studies. During those hours they’ll also learn and practice important skills such as how to record vital signs, conduct patient surveys, get proper consent, read scientific journals, and organize research specimens. The shifts span every day of the week between 6 a.m. and midnight. For the first seven years of the program, students were stationed primarily at Primary Children’s Hospital. But recently, the program expanded into obstetrics, outpatient clinics, and women in labor, which, Holsti says, could make it a little tough for students who’ll walk into a room and “wonder what they’ve gotten into.” But one critical element of the program is that the students help each other, and “that’s what I wanted it to turn into,” Holsti says. “Intermountain Health Care doesn’t want students free-roaming in the emergency or obstetric rooms.”

Students are subject to background checks and are pre-screened before joining the Academic Associate team, after which they undertake two weeks of training. The goal is to endow them with competency and confidence as they begin their work. Still, even with that training, students can be intimidated, as happened with three students who witnessed the death of an infant in a resuscitation room. To ease their distress, Holsti explained what had happened, and how, and assured them that nothing could have been done to save the child. “So, there’s an emotional development that takes place as our students see what happens in a busy ER, for example,” Holsti explains. “They also grow each time they have to enter a room, introduce themselves, and present research in a confident and professional manner.”

John Anderson BA’15, another graduate of the program, got his first taste of the hospital experience when he volunteered to work in the emergency room at the Intermountain Health Care hospital in American Fork. Once he got to the U, the experience led him to the Academic Associate program. Having graduated with a degree in chemistry and the program minor, he, too, is now a research coordinator at the U medical school’s clinical trials office, as well as the administrative assistant for the Academic Associate program. 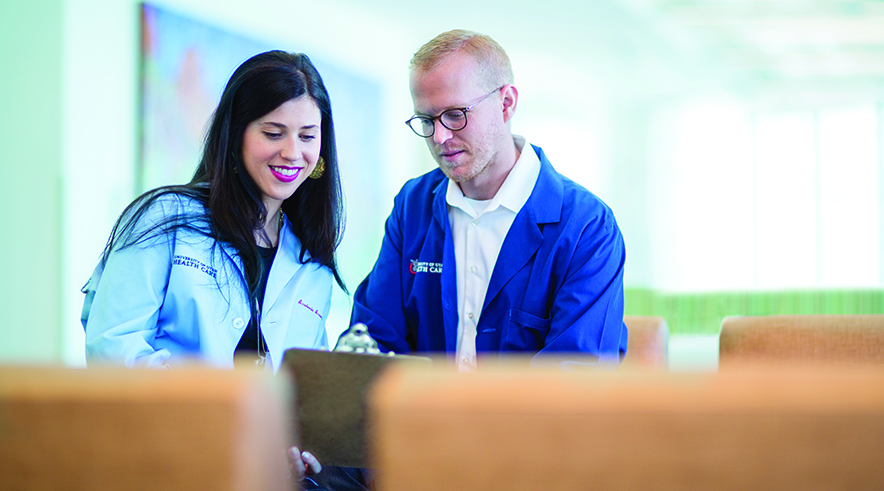 But his sights are set on becoming a pediatrician. “At Primary Children’s, you see a lot of cancer patients, and it makes a huge difference to help a lot of these kids.” And there’s the fact that Anderson’s partner was diagnosed with leukemia as a very young child. She was treated at Primary Children’s and has been in remission since she was five years old. “She’s very thankful to have had those doctors to help treat her cancer and overcome it,” Anderson says. “I’d love to play a similar role in patients’ lives.”

But not all involved with the Academic Associate program are bound for medical school. Elizabeth Arrigona BA’13, who graduated with an English degree, is the program’s coordinator. She made her way there after seeing the program’s brochure. “It completely changed my life,” Arrigona says. “I knew what I was to do.” She says the program has a lasting impact on the students. “I think the great majority will go into the medical field,” she says. “Enrollment was through the roof for the winter semester.”

Dela Cruz, the program’s full-time research coordinator, sees a two-fold future: earning a medical degree that will coordinate with his clinical pediatric research. “I thought I’d only be a doctor, but now I have to be part of research,” he says. “The only way for science to advance is research, and interacting with parents and kids, families.” For a profession that takes care of people, Dela Cruz believes there’s not enough personal connection. “You have to keep interactions human,” he adds.

Educational interactivity is crucial to the Academic Associate program. The students’ training includes lectures from physicians, including Holsti, and meetings with doctors, scientists, and researchers. “I think it’s neat that the students are surrounded by all these people in health care and scientific efforts,” Arrigona says. “Later, they can reflect on those presentations. There’s a little bit of everything, really.”

For Holsti, the reward for all the students’ work is what they’ll learn and participate in as they attend classes and discover what’s going on in medicine. They are exposed to global perspectives, new research, ethical questions, and good patient care. “There are a lot of aspects that we cover,” she says. “Ethics, how to design a good study, how to read a scientific paper. This is all clinical research.” She says the students also love getting to see firsthand what it’s like to be a physician.

Still, not all academic associates will go into this particular type of clinical research or into medicine at all. “Some of the students do this and figure out, ‘this isn’t for me,’ ” Holsti says. But those who choose other fields of medicine get the advantage of having clinical research experience under their belt. And those who end up in nonmedical roles still benefit from the volunteer, leadership, and research experience they gain in the program. “Not all degrees prepare you for a job right out of college,” Holsti says. “But the experience our students get working as clinical researchers opens doors for them.”