Sierra Jensen calls joining a club sport at the University of Utah the best decision of her college career. "And I would even go so far as to say in my young adult life," adds Jensen, 21. The senior, majoring in civil engineering, plays Ultimate Frisbee, one of 24 clubs currently active at the U.

Best friends. Better grades. Bonding. The thrill of elevated competition. Road trips. Lasting memories. Growth experiences. And great views, at least for outdoor sports at the U. They're all part of the club sport experience that student-athletes say draws them to compete at the club level versus taking part in intramural sports, pick-up games, or even NCAA-sanctioned play.

"Club sports represent a critical opportunity for students to stay engaged, to stay healthy, to develop new habits and experiences, make friends, and benefit from all of the social components of being engaged in team sports," says Barbara Snyder, vice president of student affairs. "We are very convinced that a well-rounded undergraduate's experience can be enhanced by engagement with club sports."

So, maybe Jensen's claim doesn't seem too lofty, even when you factor in the sometimes high cost to students. 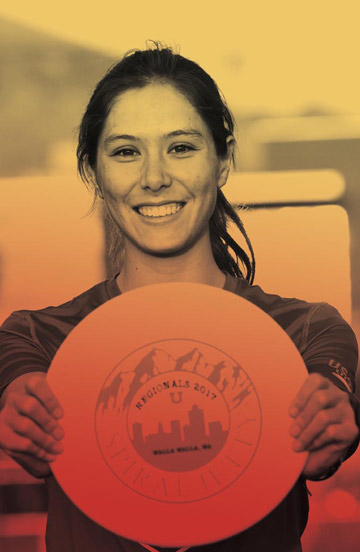 A small amount of funding for each sport comes from student fees collected by the Associated Students of the University of Utah, but Jensen, like all students who play club sports throughout the country, pays plenty out of her own pocket. There are no scholarships in club sports, which also rely on team fundraisers to keep them going. Jensen estimates she spends about $500 to play with Spiral Jetty, the U's Ultimate team. Some of that money covers travel, but it also pays for renting indoor practice facilities on campus during the winter.

Ultimate is one of the less expensive club sports. Others, like hockey, can cost a student upwards of $1,800 in dues per semester. Women's lacrosse player Audrey Burns, majoring in kinesiology, pays $400 for the fall season and $2,000 in the spring, when the team competes and travels more. Burns, 21, notes that her fees pay for travel, accommodations, field space, coaching staff, referees, tournament and league fees, gear, and uniforms. "It's hard to raise money on our own, but it is also rewarding to show people our passion for the sport," she says.

The dividends in the investment, as students report over and over, are many. If they're not practicing, competing, or traveling together on a long road trip to the next game, they're studying with each other or just hanging out. Lots of time together forms tight bonds. Those road trips for Jensen have included destinations like San Diego, Calif.; Eugene, Ore.; Missoula, Mont.; Boulder, Colo.; and beyond.

And don't let the "club" aspect make you think students are in it just for fun. These athletes are competitive. Jensen's club qualified in spring 2017 for the Northwest Regional tournament. The men's Ultimate team, called Zion Curtain, qualified for nationals in 2016, finishing 13th. Other campus clubs, such as the pistol team, compete on regional and national stages every year. The U's climbing club took the national championship at the 2017 USA Collegiate Climbing Series competition in San Diego.

The popularity of club sports at the U factors into why some students choose Utah in the first place. Seth Hughes, a sophomore majoring in kinesiology, picked the U over several other schools because it had clubs in both swimming and water polo, both of which he plays. "This is just an awesome way to stay involved with the sports you grew up loving in high school," says the Chicago native, 22.

Jeff Whipple flew in from Bellevue, Wash., with his son, Patrick, last fall to check out campus and watch the rugby club beat Colorado University-Boulder 52-22 on a warm, sun-drenched McCarthy Track and Field. "Rugby will be a factor in deciding which school Patrick will choose," Jeff says. "I look for a program that's going to be good for my son. The type of community you get into is a big deal. What's the personality like? What's the culture of the team? Are the coaches supportive of academics as well as rugby and fitness? Those are the kinds of things we're looking for when we're on campuses." His son wants a good school that happens to have a rugby club. "I don't want to end up at a school that has a D1/varsity team and then I don't make the team and, as a result, I have nothing to do with the school."

Patrick's point about forming a connection with the school he chooses is one that Snyder echoes. "If you look at involvement in recreational programs in general, students who participate regularly do better academically, they persist to graduation more quickly in greater numbers, and they're more loyal alumni," Snyder says. "For a lot of students, club sports may be one way that they're going to be involved on campus outside of classes." 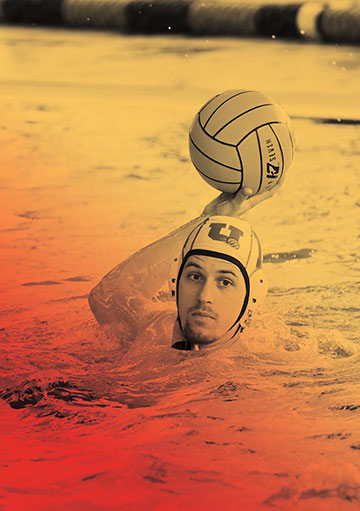 Club sports is now a big presence—and growing—on campus and requires oversight, guidance, and support, even though each sport is student-formed, and student-led once they're up and running.

U sports clubs are under the purview of Campus Recreation Services, which also oversees intramural sports. Sean Michael Monnier, manager of Intramural Sports & Sports Clubs, provides a lengthy handbook that lays out best practices and policies to govern clubs as well as covering areas like risk management, insurance, injuries, financial guidelines, and facility use. "Club sports help students develop skills such as leadership, organization, responsibility, time management, teamwork, and decision making," Monnier says. His department helps students with forming new clubs, which can start as easily as a click of a mouse on the campus recreation website, followed by paperwork and a few other hoops.

Madi Tripp, Ella Johnson, and Zion Levister joined men's volleyball practices inside the HPER complex last fall as part of their quest to form a women's team. They began talking to leaders of the men's club for tips on how to start a club, held tryouts, and will need to give a presentation to administrators this spring to justify the need. "I hope it's a chance for people who are like me, who aren't playing at the collegiate level, who just want to keep their skills up and be with other girls who enjoy playing volleyball," Tripp says. She hopes her club will be up and running in fall 2018.

Giuseppe Huaman, 27, and Jeff Larsen, 37, helped reestablish a men's volleyball club after the team was suspended, which can occur for a variety of reasons from conduct violations to unauthorized use of certain logos. (Clubs can use the block U, for example, but the drum and feather logo is off limits.) Larsen, who is pursuing a bachelor's degree in accounting, found it would be easier to start a new club rather than try lifting the former club out of suspension. Huaman, born in Peru and seeking a master's in education toward his dream of becoming a teacher like his late mother, has seen club volleyball improve his academic trajectory. "When I first started playing, I saw a change in my grades," he says. "Other players have helped me to achieve my goals for school."

Sometimes a club is formed out of the passion of a single individual, like Vivian Bentley, 20, a junior seeking a degree in Parks, Recreation, and Tourism. Finding a place to practice the Japanese martial art of Kendo, initially for just four people, was difficult when Kendo was not an official club. Bentley bounced around from the A. Ray Olpin University Union to the Naval Sciences Building, and finally, when Kendo was designated an official club, the Student Life Center, where clubs are offered free use of the facilities. Kendo now has 18 members.

Students also have to go out and find their own coaches, who wind up working for very little payment. But for the coaches, it's not about the money. "I'm terribly excited to be involved in this. The fact that they're doing this on their own, organized it on their own… it's fantastic," says Will Reeves, who coaches the swimming and diving club. He is well known in the community for having coached at the high school and master's levels. "I love to see these kids given an opportunity to compete." The men's volleyball club team found their coach, kinesiology advisor Loren Finn, by noticing evidence in his office of a lifelong connection to the sport. "And I use volleyball as a medium to life," says Finn. "Everything that I do, I say, 'How can we use this in our everyday life?' " Women's lacrosse coaches Brooke Erickson and Glee Corsetti, former players and then coaches elsewhere, have ambitious goals for their athletes. "We're actually going to change the world, starting right here on this field," Corsetti says. Their philosophy is to help their players to be "powerful, well-rounded women who go into the real world with tools they wouldn't otherwise have." 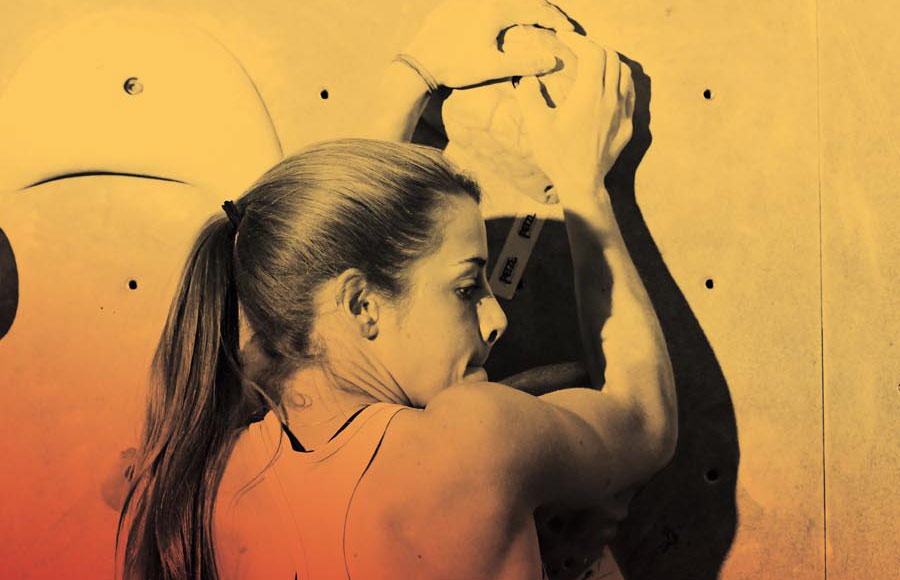 PLAYING BY WHOSE RULES?

Competition and ambition can reach a fever pitch, compelling those involved to seek NCAA status. That's what happened with coach Brian Holman's men's lacrosse team, which is slated for its first official NCAA-level game in spring 2019. When the change from club to NCAA takes place, that's when the Athletics Department takes over—and it's a whole new game.

"Once you switch, it's a gigantic switch," says Athletics Director Chris Hill MEd'74 PhD'82. Beginning July 1, 2018, his department will kick in support services and marketing for men's lacrosse, along with training facilities and sports medicine resources, promotions, and ticket sales.

The main reason Hill says the U was able to raise men's lacrosse to Division 1 status was money—as in a $15 million endowment to fund the team. Otherwise, he says, his department would not have been able to afford adding it to their roster. Also, he says, there are rules under Title IX that dictate when a university can add a sport.

The downside for students who once qualified to play at the club level, however, is that when their sport graduates to NCAA status, the level of competition and recruiting increases. "I think that there are people who are on the lacrosse club team now who aren't going to be able to play at that level," Hill says. (Sometimes, though, there is enough interest to have both a club and NCAA-level team, as with sports such as swimming and soccer at the U.)

It's estimated that more than two million students participate in upwards of 50 different club sports on college campuses throughout the country—and they draw crowds of cheering fans. At the U, rugby, hockey, men's and women's lacrosse and soccer, climbing, and cycling seem to attract the most spectators. "The Salt Lake City community loves to come out and support us," Monnier says. "The clubs with the biggest crowds seem to have really figured out how to market themselves."

For the athletes, however competitive they may be, the experience is as much about creating lasting memories and friendships—as well as the way it can push them to achieve in not only their sport but elsewhere in their lives. In short, joining a club sport could be the best decision they make during college. "These women make me a better student and make me want to achieve more by seeing how much each of us accomplishes in our lives outside of Frisbee," Jensen says.

— Stephen Speckman is a Salt Lake City-based writer and photographer and a frequent contributor to Continuum.

CLUB SPORTS AT THE U