Not far down the hill from the University of Utah on a cool October evening, a doctor doing his fellowship at University of Utah Health Care (UUHC) and two graduate students in the U’s athletic training program attentively scan the field at a Judge Memorial Catholic High School football game for signs of players in distress. Earlier the same day, the three sports medicine specialists were in Judge’s training room treating athletes with an IT band injury and a sprained ankle. From a sports medicine standpoint, you could say that UUHC and Judge are joined at the hip.

UUHC’s presence at Judge is part of one of the first off-campus partnerships between UUHC and an increasingly long list of athletics organizations, high schools, and community sporting events. “We really wanted to connect at the community level,” says Bart Adams, University Orthopaedic Center (UOC) executive director.

It was Adams who hired Blake Johnson BS’04 MS’06 in 2008 as an athletic trainer for U athletes and, in what has proved to be an even bigger deal, to be U Sports Medicine’s outreach coordinator (and eventually, become its business operations director). It is under Johnson’s leadership that UUHC has grown its presence beyond the U’s campus and brick-and-mortar healthcare network. And it’s paying off—for everyone involved. UUHC now provides a wide range of athletes with emergency medical services and support in areas such as injury evaluation, management, and prevention. In return, UUHC receives valuable exposure in the community, generating growing interest in its award-winning health care services. In addition, Johnson says the partnerships allow fellows in the U’s Sports Medicine program access to a variety of patients and to travel abroad, providing coveted experience in their fields. “That’s what separates us here,” Johnson says. “I think the opportunities are limitless.”

A RANGE OF PARTNERS

The larger-than-life photo of Utah Jazz guard Danté Exum in the south-facing windows of the UOC isn’t there only because people inside really like the six foot six Aussie. He’s pictured there because of a partnership UUHC struck with the Jazz in 2014 to provide world-class medical services to its athletes.

Exum used those services after he tore the anterior cruciate ligament in his left knee in August 2015. More than a year later, Exum is better and back to playing with the Jazz. “Dr. [David] Petron, Dr. [Travis] Maak, and the entire University of Utah Health Care staff do a great job of taking care of us,”says Exum. “They were an integral part of my recovery process, and I am very thankful to them for that.”

And the number of renowned athletes in UUHC’s care grew substantially in 2016 when the United States Olympic Committee (USOC) added UUHC as a designated national medical provider. Paralympic athlete and gold-medalist Muffy Davis, a former University of Utah Rehabilitation Center development officer who also took classes at the U, was a patient multiple times with UOC while training for and competing in the 2012 Paralympics in London. 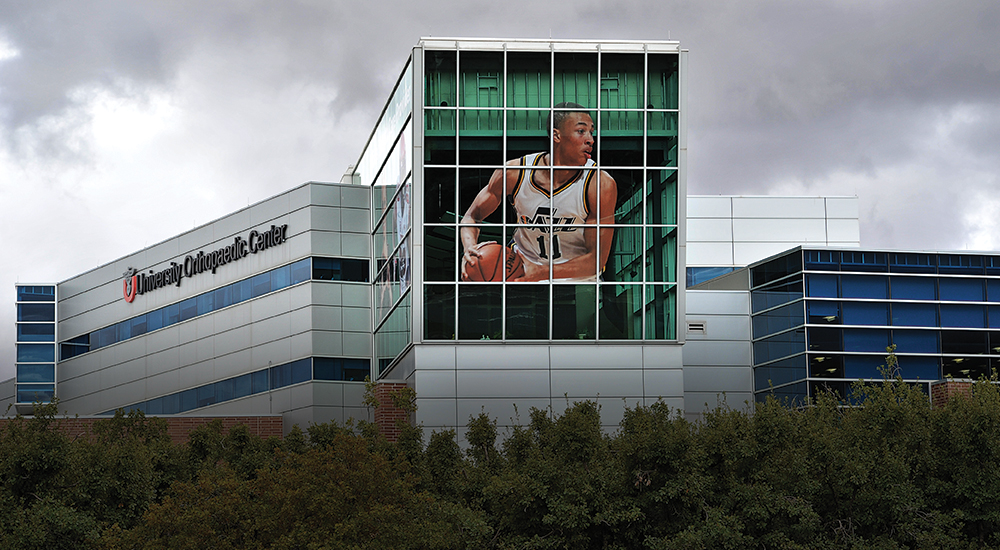 When the Olympic committee announced adding UUHC to its National Medical Network, Davis expressed enthusiasm over the partnership and praised the care she received. “It’s that amazing quality of care that I experienced—they took me under their wing,” Davis says. “I am so excited that future Olympians and Paralympians are going to get the same opportunities to see the same medical professionals.”

The U’s now 20-plus partners also include organizations such as the Larry H. Miller Tour of Utah bicycle race and the Salt Lake Bees Minor League Baseball team (a Triple-A affiliate of the Los Angeles Angels of Anaheim). Over just the past year, UUHC also teamed up with Salt Lake Community College, the NBA D-League team Salt Lake City Stars, and two more high schools. Johnson, Adams, and others at UUHC are continually looking for and evaluating more partnership opportunities, careful not to grow its volume of collaborations too quickly or dilute the quality of service being offered on and off the U campus. Locally, UUHC’s highest-profile partnership has been with the Utah Jazz.

“Our partnership with University of Utah Health Care has tremendous value because of the access to world-class sports medicine and clinical care expertise,” says Steve Starks, president of Larry H. Miller Sports & Entertainment and a UUHC Board of Trustees member. “The Utah Jazz, Salt Lake Bees, and Tour of Utah cyclists receive the very highest level of care from best-in-class physicians, hospitals, and clinics.” (Miller Sports owns the three sport entities.) Starks explains that the affiliation between UUHC and Miller Sports works so well because of their shared commitment to fitness, health, and wellness. “We both believe we can make a lasting contribution to the quality of life in our community,” he adds.

When Judge’s star cross-country runner Eric Heideman sprained his ankle this past fall, it was U sports medicine graduate student Travis Nolan, a certified athletic trainer, who helped the senior get back to his winning pace. “Travis really knew what he was doing and helped me recover really fast,” says Eric, whose father also coaches the team. 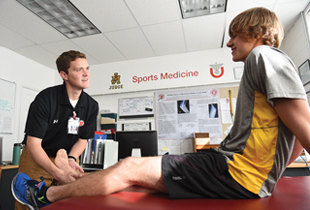 Judge cross country and track and field coach Jason Heideman has now seen the collaboration that began in 2009 benefit multiple sports at his high school, including recently when his distance runners received a free gait analysis from UOC for the purposes of correcting running mechanics and injury prevention. “This was the first season I was approached about doing something preventive,” says Jason. “The whole analysis is designed to keep our kids healthy and also for the running experts up at the UOC to teach the trainers and other PTs what to look for.”

Judge’s George Angelo, director of sports medicine at the school and an associate instructor in health promotion and education at the U, was on the ground floor of collaborating with UUHC. “We met many times to see how we wanted to make this a model program,” Angelo says. “Two aspects began to emerge: how to bring in graduate assistant students to work at Judge, and how I could help improve the athletic trainer program at the U with a more comprehensive first aid class for students entering the program.”

In the training room at Judge, Nolan teams up with UOC physical therapist and athletic trainer Alison Merritt DPT’09 and first-year U master’s student Jenny Zehner to care for about 300 athletes. “Since we are contracted out by the University Orthopaedic Center, we have amazing connections with well-known orthopaedic specialists in the area,” says Nolan. “This allows us to provide a continuum of health care services for our athletes if they need to go through the referral process.” Ultimately, he explains, these connections mean more efficient and effective health care for their athletes. He adds, “This allows them to return to their sport in the fastest manner possible while still protecting their body and long-term health.”

Dr. David Petron—an associate professor in the U’s Department of Orthopaedics, chief medical officer for the Jazz, a primary care orthopaedic/sports medicine specialist for UUHC, and team physician for both the U’s athletic teams and the U.S. Ski Team— was one of the doctors who paved the way so that the UOC would provide oversight with placing U students in high schools. While it’s “fun” taking care of Jazz players and professional athletes, Petron says, “It’s just as important to return athletes to a marathon race or a high school kid to a soccer game. It’s just as important that we use the same skills we use for elite athletes to take care of the general population, which is most of what we do.”

UUHC now partners with more than a half dozen high schools. And as they signed on, so did major sporting events such as the Salt Lake City Marathon and the Tour of Utah, as well as athletic organizations such as the Jazz and Bees, which each signed a multi-year contract to have UUHC as their official medical provider.

In conversations about partnerships, Dr. Stuart Willick—a UUHC sports medicine physician who has experience working with the U.S. Ski and Snowboard Association, US Speedskating, and the International Olympic and Paralympic medical committees—hits on the research being conducted before and during collaborations. 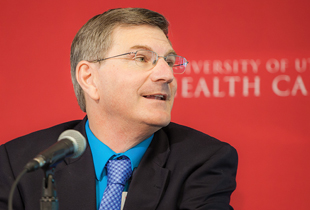 In the booming sport of mountain bike racing, for example, Willick talks about a comprehensive system to track and characterize injuries in great detail to understand what types of injuries are occurring and how to treat or possibly prevent them. “There has been particular success in decreasing injury rates in Paralympic athletes,” Willick adds.

Willick explains that the UUHC’s excellent local and international reputation for clinical care, event coverage through partnerships, and sports science research improves its recruiting ability for physicians and researchers. Just one example of this reputation is UUHC’s recent first-place ranking in quality, safety, and accountability out of 100 of the nation’s most distinguished academic medical centers studied by the health care performance company Vizient.

“Our sports medicine fellowship is one of the most highly sought after fellowship programs in the country,” notes Willick. “We get the cream of the crop.”

Dr. Patrick Greis is another one of the reasons for UUHC’s stellar reputation and why its draw as a partner has grown over the years. Greis joined the U’s orthopaedics department in 1997, specializing in sports medicine as a surgeon focusing on knee and shoulder injuries. Greis says that UUHC has a cache of such specialists who might have done 500 of the same kind of surgeries on U athletes and the general public that doctors elsewhere with a broader approach to treating patients might do only a handful of times.

It’s that depth of experience and expertise that Greis says makes UUHC attractive both as a partner and as a medical services provider to the community. “Our track record put us in the position of taking care of the Jazz,” Greis says. “We’re seeing the benefits of a consistently high-quality product we’ve put out there for a long time.” 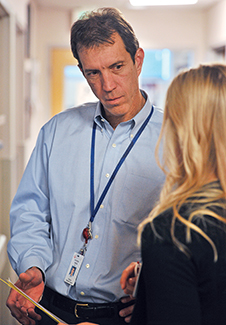 Patrick Greis consults with a colleague.

Outside of Utah’s border, the partnership UUHC has with Ski Utah has its CEO Nathan Rafferty seeing the marketing impacts on people’s vacation choices and beyond. Two UUHC staffers recently led a skier-specific workout class with Ski Utah at a public relations event in New York for journalists who cover skiing and fitness. “You’d be surprised who wants to come and vacation here and wants to know if there is excellent medical care nearby,” Rafferty says. “You have some of the best medical options in the world literally a half hour away from a ski facility. You can’t say that about all the major ski destinations in the U.S.”

Back at the Judge football game, it’s Dr. Adam Harrold, a Kansas native working on a one-year fellowship at the U under Petron’s direction, who patrols the sidelines with Nolan and Zehner. Taking turns treating cuts and wrapping minor injuries, they watch for and talk about possible signs of concussion. Tonight it’s football injuries, but in the nine months or so that Harrold has left in his fellowship, he’ll see patients from college and high school sports in rugby, lacrosse, hockey, basketball, and gymnastics.

“The training I’m receiving here is second to none,” says Harrold, who chose the U for a fellowship over others around the country because of the multiple disciplines being covered. “I’m getting really well-rounded training, and the opportunities to be involved at athletic events are an added benefit.”

For the Judge Bulldogs, it ends up being an emotionally painful night on the gridiron as they close the season with a loss. But at least they have a relatively healthy team, thanks in part to UUHC, and can regroup as they start training for next year with a strong partner by their side.