Creating a caring, proactive community for those with Multiple Sclerosis.

“We are the new generation of Multiple Sclerosis. Some of us master black diamond runs, mountain bike races, river running—anything that keeps us moving. We keep moving because we still can,” declared Jane Bjorklund at the 31st annual Dinner of Champions held at the Grand America Hotel in Salt Lake City last September. Bjorklund is one of about 50 members comprising Team Brain, a unique mix of patients, clinicians, researchers, staff, friends, and family that helps raise funds for the Utah state chapter of the National Multiple Sclerosis Society (NMSS).

Co-sponsored by the University of Utah’s Brain Institute (BI) and Clinical Neurosciences Center (CNC), Team Brain reflects the collaborative philosophy of its academic counterparts. The BI and CNC gather together scientists from various disciplines to research and treat neurological disorders. MS is a major research focus of the Brain Institute, which holds education seminars on the disease and creates awareness through groups like Team Brain, encouraging researchers to more fully interact with patients and the community at large. 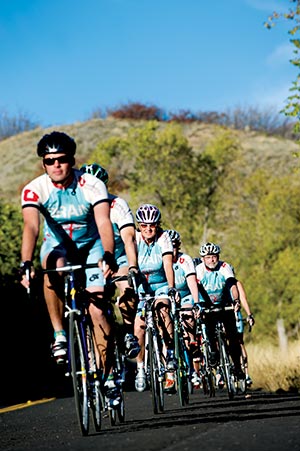 What’s striking about the Team Brain members with MS is that none of them fits the stereotype of someone battling a chronic illness. They are healthy, physically fit, and strong.

“Many patients do quite well and can continue working at their jobs and participate in a bikeathon. Others accumulate physical disabilities over time and may end up in a wheelchair,” explains John Rose, BI investigator and CNC faculty. Also a world-renowned MS specialist, Rose treats three of the team members with MS and leads clinical trials in which the other two take part.

MS arises when the body’s immune system attacks its own central nervous system, brain, and spinal cord. Resulting damage can cripple or block nerve impulses, producing variable symptoms including tingling, numbness, pain, and paralysis in different parts of the body. Most of those afflicted initially experience intermittent attacks that are followed by periods of remission. What is often most difficult for the new patient is the unpredictability of the illness.

A case in point: Rachel Taylor, now development director for the Utah chapter of NMSS, who coincidentally volunteered with the organization years before learning she had the disease. On a fateful day nine years ago, Taylor experienced dimming eyesight in her left eye. A formal diagnosis confirmed her fears. “I just remember pacing around my yard filled with terror because I didn’t know what direction my life was going to take,” recalls Taylor.

Although the causes of MS remain a mystery, certain clues have helped researchers determine which individuals are predisposed to the disease. For example, women with MS outnumber men nearly 3 to 1. MS is most prevalent in people of northern European descent, and the disease is more common in northern locales far from the equator. The latter two elements combine to give Utah, with its predominantly northern European-originated population, one of the highest incidence rates in the country, estimated at 1 in 300.

With both environmental and genetic factors at play, MS can be a difficult illness to treat. Today, there are six FDA-approved drugs that can slow or stop the onset of new symptoms. One patient may respond best to drug A, another to drug B, and another to a combination of drugs. But there are still many for whom currently available drug therapies are ineffective.

Rose conducts clinical trials to test new medicines to treat MS. “Each time we get a new drug, we can treat a few more patients who could not be treated before,” he explains. New treatments may also benefit patients who do not respond fully to currently available medications, or who suffer unpleasant side effects.

“The exciting thing about working in MS research and having the disease is that I’m looking at what will be the next generation of medications,” says Bjorklund, who, upon learning that she had MS, became a certified clinical research coordinator and now works with Rose at the CNC. “MS could take a path over the long term for which I might need that new line of therapy.”

Rose receives the largest funding from NMSS of any researcher in the state. The largest private funder of MS research worldwide, NMSS also finances BI investigator Andrea White BS’86 MS’89 PhD’95, research associate professor of exercise and sport science. At last year’s Utah Bike MS, the NMSS Utah chapter’s biggest fundraiser, Team Brain and the 158 other participating teams helped garner $1.5 million. About half the funds will go toward MS research, and half toward programs and services to benefit Utahns affected by MS.

Last June 27, 3,000-plus riders assembled in Cache Valley for the event. Among them was Katrina Lund, diagnosed with MS a year and a half ago. “It was incredible to have this big group of people with whom you have an automatic acceptance,” she says.

There is no organized MS network in Moab, where Lund lives. Bjorklund, who is research coordinator for a clinical trial in which Lund is participating, recruited her to Team Brain. Lund hoped the ride would connect her with the MS community. It did. “When I saw that Jane and Ruth [Flanagan] and other members of Team Brain were at the finish line to cheer me on, tears started streaming down my cheeks,” says Lund, who plans to re-create the supportive friendships she made on Team Brain in her own hometown. “The experience transforms us into better people, making us want to do more and give more.”

For decades, MS patients were advised to abstain from exercise. That all changed when a hallmark study published by U of U researchers in 1996 showed that in exchange for a transient worsening of symptoms during workouts, patients became physically fit, stronger, happier, and more proactive.

“Typically, people with MS live as long as those without,” notes White, an author of the study. “The number one killer is still heart disease, and regular exercise can decrease risk factors. So we should all be exercising on a regular basis.” She has biked with Team Brain since its inception two years ago.

A goal of regular exercise can be easier said than done when symptoms are unrelenting. Simon Hanrahan, who has MS, says he has felt a burning sensation in his left leg since 2002. “I never let it get me down. I approach the pain like a bulldozer. I just work through it.” 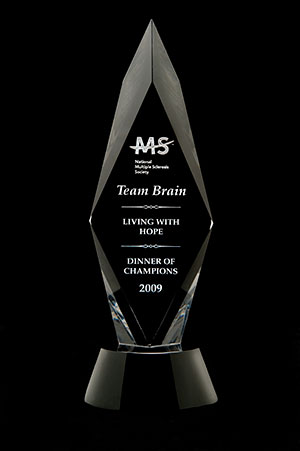 atigue can also make exercise difficult. White recently completed a pilot study showing that during and directly after 25 minutes of moderate exercise, MS patients felt four to eight times more fatigued than control subjects, and continued to feel just as tired a day later. “Think of professional cyclist Lance Armstrong, whose trainer makes him go faster and harder even though he is already tired from training,” she says. “People with MS are like elite athletes. They train themselves to cope with it.”

Since the onset of MS, Flanagan is exhausted and has trouble concentrating the next day if she doesn’t sleep at least nine hours. A former triathlete, Flanagan says her symptoms prevent her from being as competitive in sports as she used to be. “I realized that it didn’t matter if I came in last. My satisfaction comes from finishing.” Nevertheless, she always pushes herself to perform her best. She cycled 175 miles—the maximum distance—at Utah Bike MS.

At the fall 2009 Dinner of Champions awards event, organized by the Utah NMSS chapter, Team Brain—which had more riders with MS than any other in last year’s Utah Bike MS—was recognized with the Living with Hope award for exemplifying the importance of a supportive network for staying active. The gala celebrates local civic and sports luminaries, and the five Team Brain members at the podium—Bjorklund, Flanagan, Hanrahan, Lund, and Taylor—seemed slightly uncomfortable to be honored alongside the likes of legendary ice climber Jeff Lowe, who has a condition similar to MS. Flanagan remarked, “I’m not sure I deserve an award just because I have gremlins running around my body.”

Some of their achievements are intangible but extend lessons that are invaluable to anyone. “I hope I can show people that whether you have a chronic disease or another trauma in life, you have to take control of your own destiny,” says Hanrahan. “Getting the award is recognition for what I’ve been through and a chance to be a public role model.”

For more information about Team Brain, visit their website.

Read a brief primer on the varying forms of MS